For Prelims: What are Organoids? Features.

For Mains: Applications and ethical concerns.

Context: We’ve heard a lot in the last few years about organoids, the so-called “brains in a dish” created in labs by neuroscientists.

However, experts have expressed concerns over growing mini-brains or organoids in the laboratory that can perceive or feel things.

In some cases, scientists have already transplanted such lab-grown brain organoid to adult animals.

These are seen as a step towards potential “humanisation” of host animals.

What is an organoid?

Organoids are a group of cells grown in laboratories into three-dimensional, miniature structures that mimic the cell arrangement of a fully-grown organ.

How are organoids grown in the laboratory?

Grown in the lab using stem cells that can become any of the specialised cells seen in the human body, or stem cells taken from the organ or adults cells that have been induced to behave like stem cells, scientifically called induced pluripotent stem cells (iPSC). 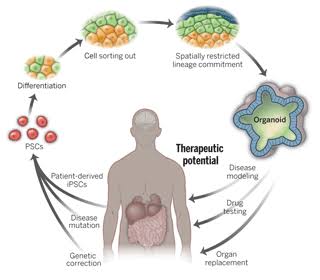 How have organoids helped in our understanding of diseases?

What are the ethical challenges of growing organoids?

Scientists argue that organoids do not have sensory inputs and sensory connections from the brain are limited. Isolated regions of the brain cannot communicate with other brain regions or generate motor signals. Thus, the possibility of consciousness or other higher-order perceptive properties [such as the ability to feel distress] emerging seems extremely remote.