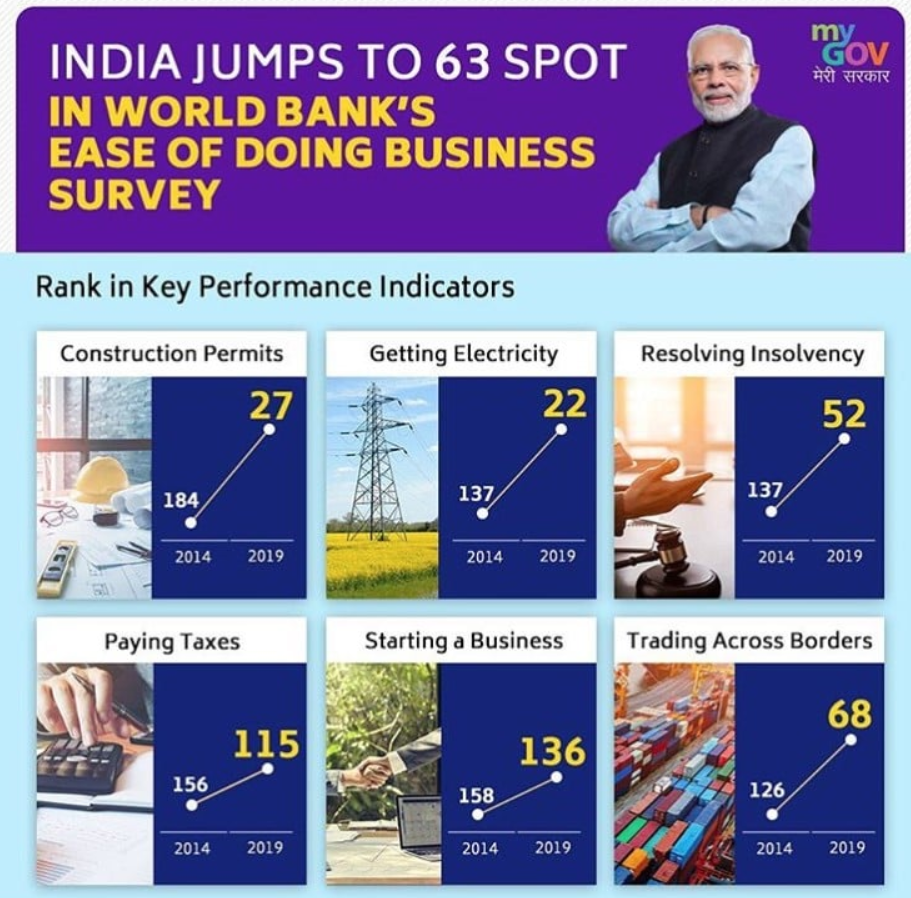 About Ease of Doing Business Report:

Ease of Doing Business is an annual survey published by World Bank.

The report was introduced in 2003 to provide an assessment of objective measures of business regulations and their enforcement across 190 economies on ten parameters affecting a business through its life cycle.

This time 11th parameter viz. employing workers was measured but was not factored into the score.

It ranks countries on the basis of Distance to Frontier (DTF) score that highlights the gap of an economy with respect to the global best practice.

For example, a score of 75 means an economy was 25 percentage points away from the frontier constructed from the best performances across all economies and across time.

The Doing Business assessment provides objective measures of business regulations and their enforcement across 190 economies on ten parameters affecting a business through its life cycle.

Other side of the coin that need to be addressed: Areas that need Improvements:

While the improvements are impressive and the rise in overall rankings in the last few years is noteworthy, the fact is that India is still below its competitors for global capital, particularly China, which at rank 31 is one level above France.

The country lags in key metrics such as “Starting a business’, “Enforcing contracts” and “Registering property”.

It should also be borne in mind that the rankings are based on samples and audits done in Mumbai and Delhi only (the World Bank has said it would be covering Bengaluru and Kolkata too from next year).

Starting, running or shutting down a business may be easier in Delhi and Mumbai compared to Coimbatore or Hyderabad where it is probably more difficult.

Admittedly, it is not easy to streamline processes across the country given India’s federal set up where States have a big say in several parameters that go into the ranking such as securing building permits, land approvals, electricity connections, registering assets etc.

It takes 1,445 days for a company to resolve a commercial dispute through a local first-instance court, almost three times the average time in OECD high-income economies.

Improvement have taken place due to the commitment of the Government to carry out comprehensive and complex reforms, supported by the bureaucracy which has changed its mindset from a regulator to a facilitator.

However, the rankings do not capture the real cost of doing business in the countries with large unorganized sectors (such as India), and the cost of production are different from larger formal companies.

To come under 25 or below 50, the government needs to announce and start implementing next set of ambitious reforms now, as these reforms takes a few years to be realized on the ground.