Context: The government recently informed the Supreme Court that a eight-member search committee has been constituted in September 2018 for zeroing in on eligible candidates for Lokpal and the anti-corruption authority will frame its own rules of functioning. The panel is led by former Supreme Court judge, Justice Ranjana Prakash Desai.

A contempt petition has been filed in the court against the government for not appointing Lokpal despite an April 2017 judgment by the Supreme Court. The court has for the past several months been constantly urging the government to complete the Lokpal appointment.

Highlights of the Lokpal Act of 2013: 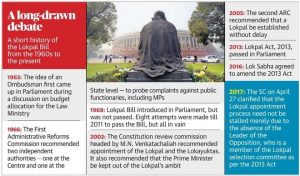 Mains Question: Comment on the changes made to Lokpal Act and its delay in operationalisation