Context: The Archaeological Survey of India (ASI) recently declared that it has added six structures to the list of monuments of national importance, taking the total number to 3,693.

The six monuments declared as Monuments of national importance in 2018 are:

What is an Ancient Monument?

According to the Ancient Monuments and Archaeological Sites and Remains Act, 1958, any structure, sculpture, inscription, etc., which is in existence for not less than 100 years is termed ancient.

The Archaeological Survey of India (ASI), under the Ministry of Culture, is the premier organization for the archaeological researches and protection of the cultural heritage of the nation.

Context: Cracking the whip on unruly MPs, Speaker Sumitra Mahajan has suspended 45 Lok Sabha members belonging to the TDP and the AIADMK after they created ruckus in the House and continuously disrupted proceedings for days.

The action was taken under rule 374A of the Lok Sabha which says they cannot attend the remaining days of the session.

Among the tools available to the Speaker for ensuring discipline is the power to force a member to withdraw from the House (for the remaining part of the day), or to place him under suspension.

Rule Number 373 of the Rules of Procedure and Conduct of Business states that in case the Speaker is of the opinion that the conduct of any member is “grossly disorderly”, he or she may direct that member to “withdraw immediately from the House”. The member is required to “do so forthwith”, and stay away from the “remainder of the day’s sitting”.

The Speaker may invoke Rule 374A in case of “grave disorder occasioned by a member coming into the well of the House or abusing the Rules of the House, persistently and wilfully obstructing its business by shouting slogans or otherwise…”. The member concerned, “on being named by the Speaker, stands automatically suspended from the service of the House for five consecutive sittings or the remainder of the session, whichever is less”.

While the Speaker is empowered to place a member under suspension, the authority for revocation of this order is not vested in her. It is for the House, if it so desires, to resolve on a motion to revoke the suspension.

Similar powers to the Chairman of Rajya Sabha:

Chairman of the Rajya Sabha is empowered — under Rule Number 255 of its Rule Book — to “direct any member whose conduct is in his opinion grossly disorderly to withdraw immediately” from the House. “…Any member so ordered to withdraw shall do so forthwith and shall absent himself during the remainder of the day’s meeting.”

The Chairman may “name a member who disregards the authority of the Chair or abuses the rules of the Council by persistently and wilfully obstructing” business. In such a situation, the House may adopt a motion suspending the member from the service of the House for a period not exceeding the remainder of the session. The House may, however, by another motion, terminate the suspension. Unlike the Speaker, the Rajya Sabha Chairman does not have the power to suspend a member.

Context: A Joint Parliamentary Committee (JPC) has adopted a report clearing the contentious Citizenship (Amendment) Bill, 2016, which seeks to amend the Citizenship Act, 1955.

WHAT IS THE CITIZENSHIP AMENDMENT BILL 2016?

The Citizenship Amendment Bill 2016 seeks to allow illegal migrants from certain minority communities in Afghanistan, Bangladesh and Pakistan eligible for Indian citizenship. In other words, it amends the Citizenship Act of 1955.

The Bill provides that the registration of Overseas Citizen of India (OCI) cardholders may be cancelled if they violate any law.

WHAT DOES IT WANT?

WHY ARE PEOPLE IN ASSAM NOT HAPPY ABOUT IT?

The Citizenship Amendment Bill has not been sitting well with the Assamese as it contradicts the Assam Accord of 1985, which clearly states that illegal migrants heading in from Bangladesh after March 25, 1971, would be deported.

Under Article 9 of the Indian Constitution, a person who voluntarily acquires citizenship of any other country is no longer an Indian citizen.

Citizenship by descent: Persons born outside India on or after January 26, 1950, but before December 10, 1992, are citizens of India by descent if their father was a citizen of India at the time of their birth.

Who is an illegal immigrant?

According to the Citizenship Act (1955), an illegal immigrant is defined as a person who enters India without a valid passport or stays in the country after the expiry of the visa permit. Also, the immigrant who uses false documents for the immigration process.

What are the guidelines to become an Indian citizenship?

Citizenship is granted to an individual by the government of the country when he/she complies with the legal formalities, so it’s like a judicial concept.

Lead and MSG in noodles

Context: The Supreme Court of India has lifted a stay on criminal proceedings against Nestle over the alleged presence of lead and MSG or monosodium glutamate in popular noodles.

The apex court had allowed the case against Nestle to reopen after the Swiss food giant had admitted the presence of toxic ingredients in its noodles during a court hearing.

Nestle’s lawyers have admitted that toxic elements like lead and MSG are found in its sample tests conducted by CFTRI (Central Food Technological Research Institute), Mysuru. However, the company has argued that the lead was within the permissible limit.

Effects of lead and MSG on health:

The National Consumer Disputes Redressal Commission (NCDRC), India is a quasi-judicial commission in India which was set up in 1988 under the Consumer Protection Act of 1986. The commission is headed by a sitting or retired judge of the Supreme Court of India.

Section 21 of Consumer Protection Act, 1986 posits that the National Consumer shall have jurisdiction to entertain a complaint valued more than one crore and also have Appellate and Revisional jurisdiction from the orders of State Commissions or the District fora as the case may be.

Section 23 of Consumer Protection Act, 1986, provides that any person aggrieved by an order of NCDRC, may prefer an Appeal against such order to Supreme Court of India within a period of 30 days.

Challenges for start-ups in India

Context: Citizens’ engagement forum LocalCircles has released a report on challenges faced by start- ups in India. The report is based on responses from over 15,000 start-ups, SMEs and entrepreneurs.

Angel tax is one area that falls under corruption and bureaucratic inefficiencies as it takes the focus of entrepreneurs away from building a product or service to responding to tax notices and filing appeals, something that start-ups can clearly do without.

What is Angel Tax?

Angel Tax is a 30% tax that is levied on the funding received by startups from an external investor. However, this 30% tax is levied when startups receive angel funding at a valuation higher than its ‘fair market value’. It is counted as income to the company and is taxed.

The tax, under section 56(2)(viib), was introduced by in 2012 to fight money laundering. The stated rationale was that bribes and commissions could be disguised as angel investments to escape taxes. But given the possibility of this section being used to harass genuine startups, it was rarely invoked.

Why is Angel tax problematic?

There is no definitive or objective way to measure the ‘fair market value’ of a startup. Investors pay a premium for the idea and the business potential at the angel funding stage. However, tax officials seem to be assessing the value of the startups based on their net asset value at one point. Several startups say that they find it difficult to justify the higher valuation to tax officials.

In a notification dated May 24, 2018, the Central Board of Direct Taxes (CBDT) had exempted angel investors from the Angel Tax clause subject to fulfilment of certain terms and conditions, as specified by the Department of Industrial Policy and Promotion (DIPP). However, despite the exemption notification, there are a host of challenges that startups are still faced with, in order to get this exemption.

Mains Question: In view of some of the recent steps taken by the government, critically examine whether the government is micromanaging startups and e-commerce players? 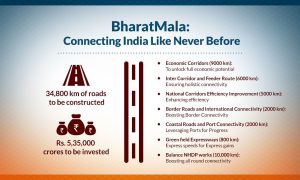 What is Bharatmala project?

Bharatmala Project is the second largest highways construction project in the country since NHDP, under which almost 50,000 km or highway roads were targeted across the country. Bharatmala will look to improve connectivity particularly on economic corridors, border areas and far flung areas with an aim of quicker movement of cargo and boosting exports.

Mains Question: Critically examine the features of Bharatmala Pariyojana (BMP) initiative and its likely impact on economic growth of India.

For Prelims and Mains: Features and significance of the project, GEF.

Context: The Government has launched the “Green – Ag: Transforming Indian Agriculture for global environmental benefits and the conservation of critical biodiversity and forest landscapes” in association with Global Environment Facility (GEF).

The project aims to catalyze a transformative change of India’s agricultural sector to support the achievement of national and global environmental benefits and conservation of critical biodiversity and forest landscapes.

The Global Environment Facility was established on the eve of the 1992 Rio Earth Summit to help tackle our planet’s most pressing environmental problems.

It is an international partnership of 183 countries, international institutions, civil society organizations and the private sector that addresses global environmental issues.

Government of India has launched the Namami Gange Programme in May 2015, with the total budgetary outlay of Rs. 20,000 crore for the period from 2014-2015 till 31 December 2020 to accomplish the twin objectives of effective abatement of pollution, conservation and rejuvenation of National River Ganga and its tributaries.

Government of India is supplementing the efforts of the state governments in addressing the pollution of river Ganga by providing financial assistance to the states.

961 Grossly Polluting Industries (GPIs) have been identified on main stem of river Ganga.

Cleaning of the river is a continuous process and efforts are being made to complete the projects by the year 2020 for creating adequate Sewage Treatment Capacity.

Each day, more than 500 million liters of wastewater from industrial sources are dumped directly into Ganga. In many places, this wastewater entering the rivers is completely raw, completely untreated.

Its implementation has been divided into:

National Mission for Clean Ganga, endeavors to deploy best available knowledge and resources across the world for Ganga rejuvenation. Clean Ganga has been a perennial attraction for many international countries that have expertise in river rejuvenation.

Mains Question: Critically evaluate the progress made under the Namami Gange programme.

Both these sections were awarded on Engineering, Procurement and Construction mode in May 2018 for Kalewa-Yagyi section and November 2017 for the TKK section. The scheduled time for completion of both the projects is three years from the date of commencement at the project site by the executing agency.

A Motor Vehicles Agreement along with protocols for regulating and facilitating movement of cargo and passenger vehicular traffic is under inter-governmental negotiations between India, Myanmar and Thailand.

The India-Myanmar-Thailand Trilateral Highway is a highway under construction under India’s Look East Policy that will connect Moreh, India with Mae Sot, Thailand via Myanmar.

The road will boost the trade and commerce in the ASEAN-India Free Trade Area, and with the rest of Southeast Asia. India has also proposed extending the highway to Cambodia, Laos and Vietnam.

Context: The hill shrine of Lord Ayyappa in Kerala has been opened for the 21 day-long Makaravilakku festival season, marking the concluding phase of the annual pilgrimage season.