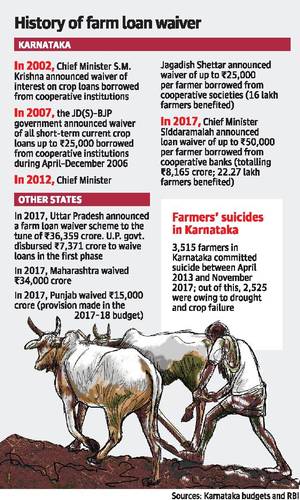 Rural agrarian distress is firmly at the centre of the national discourse today, triggered by the recent Assembly election results in the Hindi heartland as well as continuous farmer agitations.

Eight state governments have given farm loan waivers worth ₹1.9 trillion since April 2017, amid massive farmer protests and promises made ahead of the recently concluded assembly elections in five states.

The farmers march in Delhi highlighted the reality of their deprivation, anger and resolve.

Mounting debt burden is pushing farmers to despair and suicides. Indebtedness became the elephant in the room that cannot be ignored.

NSSO Situational Assessment Survey of Agricultural Households shows that 52% of farming households are indebted, the rates are as high as 89-92% in some States.

Loan Waiver from States and Centre: Is it Acceptable?

Past empirical research analysing the 2008 nationwide Agricultural Debt Waiver and Debt Relief Scheme (ADWDRS) found that it led to:

Various Research provides evidence that a blanket waiver scheme is detrimental to the development of credit markets.

These wilful defaults, in turn, are likely to disrupt the functioning of the entire credit system. It is important to note, however, that our findings do not speak against debt-waiver programmes altogether.

Rather, they warn against implementation of loan-waiver programmes based on simplistic eligibility rules that do not account for the actual needs of the farmers and the agricultural shocks they have faced.

How will farm loan waivers impact the Indian economy?

Immediate relief of loan waivers should be accompanied by a long-term systemic solution to indebtedness.

The Bill, which has been developed by the All India Kisan Sangharsh Coordination Committee, incorporates two key elements of reform:

First, it guarantees all farmer access to institutional credit;

Tenant farmers who lease land from other land owners are especially vulnerable. A study by Rythu Swarajya Vedika in June 2018 showed that 75% of farmer suicides in Telangana are by tenant farmers.

The Reserve Bank of India did issue guidelines in 2014 for extending loans to Bhoomi Heen Kisan (landless farmers) and for a debt-swapping scheme to convert informal loans of farmers into bank loans, but they have remained on paper.

Second, it establishes farmers’ distress and disaster relief commissions at the national and State levels, based on the model of Kerala’s Farmers’ Debt Relief Commission:

The State-level commission is also empowered to pass orders regarding non-institutional loans of distress-affected farmers.

The principle is that farmers who suffer losses due to circumstances entirely out of their control deserve to be protected.

Given that agriculture is a key national enterprise, the concepts of limited liability and bankruptcy protection need to be adapted to the farming sector.

This approach provides targeted protection to distressed farmers when they require it, rather than allowing debt, distress and suicides to accumulate until an election year.

At present, crop insurance with its inadequate coverage and payout is unable to fulfil that role, but distress relief would include any payout from crop insurance.

Analysis suggests that such waivers are unlikely to help the cause of either distressed farmers or troubled banks over the long run.

And they may well impair the quality of public spending by states, as the central bank fears.

A well-designed loan-waiver programme could enhance the overall well-being of the households by improving their productive investments, as opposed to distorting their loan utilization and repayment patterns.

One possibility is to formulate eligibility rules that depend on historical loan-utilization, investment, and repayment patterns.

The desired intervention could then be the one, which nudges households into investing more now and increase long-term productivity.