Insights into Editorial: What is altruistic surrogacy? 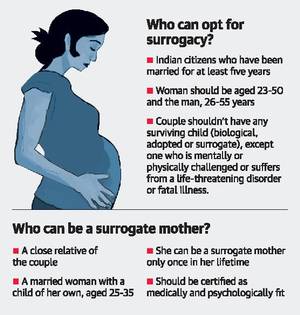 The Lok Sabha passed a Bill banning commercial surrogacy with penal provisions of jail term of up to 10 years and fine of up to ₹10 lakh.

The Bill, which will become law once the Rajya Sabha approves it, allows only close Indian relatives to be surrogate mothers and purely for “altruistic” reasons.

It states an Indian infertile couple, married for five years or more, can go in for ‘altruistic surrogacy’ where the surrogate mother will not be paid any compensation except medical expenses and insurance.

What is an altruistic surrogacy arrangement?

Role of the surrogate mother:

As per the new Surrogacy Bill, the surrogate in India continues to fulfil her role as a gestate.

Motherhood did not belong to the surrogate and she was trained to think of herself as a gestate and the relinquishment of the child was an absolutely essential clause within the draft bills on commercial surrogacy, and in practice in the surrogacy contract.

That motherhood could be for sale is a matter of distress and shock.

Serious Concerns about the Bill:

The definition of a close relative will be clearly given in the rules of the Bill.

It should be clear that only a defined mother and family can avail of surrogacy and it won’t be permitted for live-in partners or single parents.

In an overtly patriarchal society, women are always at the receiving end of ostracism and exploitation.

In facilitating altruistic surrogacy among close kin, we have to be wary of the kind of exploitation we are fostering.

The Surrogacy (Regulation) Bill, 2016, does not only violate the Articles 14 and 21 of the Indian Constitution, it’s regressive nature also reinforces the moralistic notion of purity of the womb and family.

It also takes away the rights and the bodily autonomy of women who might consensually want to become surrogate mothers.