Insights into Editorial: Making every citizen an auditor 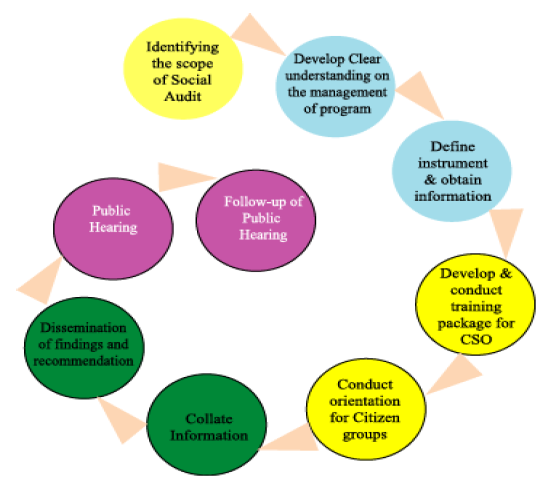 “A good auditor is a good listener” said President Ram Nath Kovind during his recent speech at the 29th Accountants General Conference.

You will not only see the accounts in their books, but also listen to their accounts.

In 2017, the Supreme Court mandated social audits under the National Food Security Act (NFSA) to be conducted using the machinery that facilitates the social audits of MGNREGA.

What is an Social Audit:

Social audit is the process of reviewing official records. It is with a view to look at whether the State reported expenditures reflect actual money spent on the ground.

Importance of Social Audit in every Department:

Social Audit is considered as a mechanism to foster transparency and improve the delivery of public programmes. It holds public officials accountable.

It empowers beneficiaries to scrutinise expenditures and keep track of delivery. They are considered as low cost and powerful participatory tools.

Individuals and communities get empowered and they experience the practical potential of participatory democracy. It is often a dramatic process of redistribution of power based on evidence and fact.

It is only when this conception is accepted that audits will return to their democratic roots, and social audits in India will get the space and attention they deserve in becoming an integral and robust part of the formal audit process.

Shortcoming in the social audits programme:

Social audits of the NFSA have failed to take off due to lack of funds.

Like the Rural Development Ministry, the Ministry of Consumer Affairs, Food and Public Distribution should give funds to the SAUs and ask them to facilitate the social audits of the NFSA.

Social audit units should have an independent governing body and adequate staff. Rules must be framed so that implementation agencies are mandated to play a supportive role in the social audit process and take prompt action on the findings.

Also, a real time management information system should track the calendar, the social audit findings and the action taken, and reports on these should be made publicly available.

Social audit processes need mentoring and support as they expand into newer programmes.

As the President said “The social audit to account whether the money was spent properly, and made the intended difference, is mostly conducted by the scheme beneficiaries.

The CAG as an institution could partner with local citizens and state audit societies to train them, build capacities and issue advisories on framing of guidelines, developing criteria, methodology and reporting for audit.”