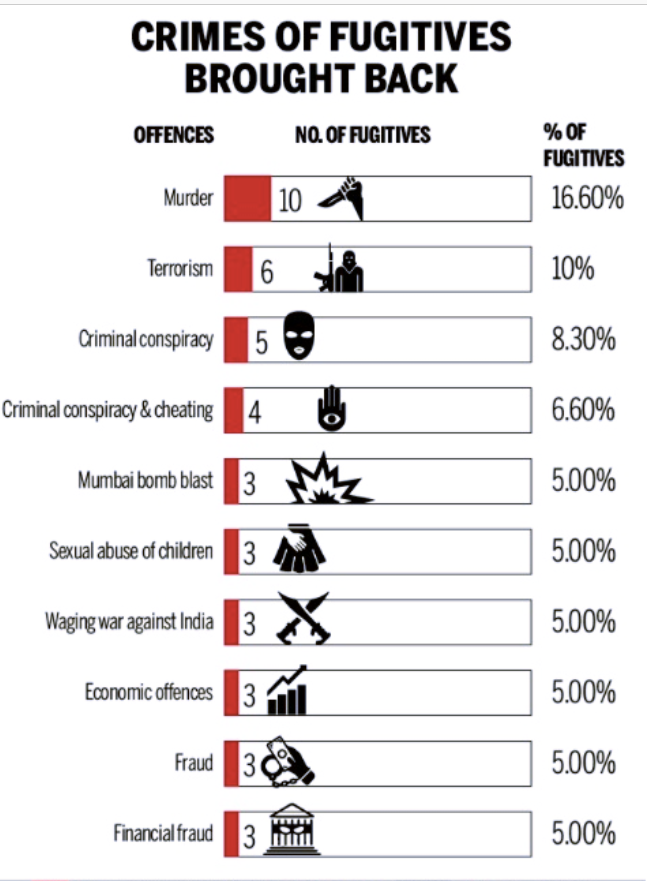 The extradition to India of British businessman Christian Michel, alleged to be the middleman in the AgustaWestland helicopters case who bribed officials to secure the deal, is a diplomatic success for a number of reasons.

India’s track record with securing the extradition of fugitives from justice is modest, with only about a third of all requests since 2002 being accepted.

Amongst the 44 countries, India has extradition treaties with, the United Arab Emirates has been the most amenable and it has deported or extradited 19 of 66 fugitives to India in the past decade and a half.

A reason for the low success rate in the past is the perception that India’s criminal justice system delivers too slowly.

Extradition is simply the surrender of a criminal to one country by another.

It also helps in maintaining the territoriality of the penal code, which says that a country should not apply its criminal law to a person who committed an offence outside its territories except when the crime is related to a particular country’s national interest.

The process is regulated by treaties between the two countries.

Extradition is governed by the Indian Extradition Act, 1962 India has extradition treaties with 44 countries. So, this means these countries generally accept that the offender will be treated as criminal in both countries.

India also has extradition arrangements with 9 countries, which means India and these countries agree to assist mutually each other in “legal procedures”.

What are India’s extradition laws?

In India, the Extradition Act, 1962 regulates the surrender of a person to another country or the request for arrest of a person in a foreign land.

The Act specifies a list of extradition offences –an offence provided for in the extradition treaty with that state. The process has to be initiated by the central government.

As we have extradition treaties with only 44 countries and extradition arrangements with another 9 countries, where there is no treaty the central government is empowered to take action by releasing a notification and treating any convention to which India and the foreign country are parties as the extradition treaty.

Between 2002 and 2016, 62 fugitives have been extradited by the Foreign Governments to India.

What are the internationally accepted extradition conditions?

There is a general consensus about a few conditions of extradition. The crime should fulfill the criterion of dual criminality it’s a punishable offence in both countries.

Political criminals are generally not extradited. Some countries refuse to extradite if the kind of expected punishment is abolished or is not administered in their own territories.

In what situations can the government deny extradition?

India has about 150 pending requests at present. Therefore, CBI must resort to internationally accepted norms of interrogation, otherwise, it gives other fugitives reasons to oppose the request for extradition to India.

India’s record in fulfilling its diplomatic obligations may impact high-profile cases in U.K. Courts, including Vijay Mallya’s and Nirav Modi’s.

Extradition arrangements work on the basis of trust and any failure to abide by the assurances would doubtlessly affect the trust between this court and the GoI.

If properly dealt with Michel case could bolster India’s reputation as a Country serious about ensuring that justice is served, and expeditiously also.

No doubt measures such as The Fugitive Economic Offenders Bill, 2018 are steps in the right direction as far as dealing with such fugitives is concerned.

But what we need to do, if we really want to put an end to this menace, is sign extradition treaties with more countries. That is the best way forward.