Who can provide? The in-flight and maritime connectivity (IFMC) can be provided by a valid telecom licence holder in India through domestic and foreign satellites having the permission of the Department of Space.

The IFMC services will be activated once the aircraft attains a minimum height of 3,000 metres in Indian airspace to avoid interference with terrestrial mobile networks.

The IFMC licences will be granted against an annual fee of Re 1 for a period of 10 years and the permit holder will have to pay licence fees and spectrum charges based on revenue earned from providing services. 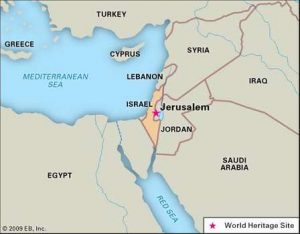 Both Israel and the Palestinians claim Jerusalem as their Capital and this despite is not resolved yet.

For Prelims and Mains: InSight Mission- objectives and significance and about HiRISE camera.

Context: High Resolution Imaging Science Experiment (HiRISE)- A camera aboard Nasa’s Mars Reconnaissance Orbiter (MRO) has captured the image of the InSight lander, which recently touched down on the Red Planet.

HiRISE operates in visible wavelengths, the same as human eyes, but with a telescopic lens that will produce images at resolutions never before seen in planetary exploration missions.

Context: The governments of India, Nepal and Bhutan are actively considering having a joint task force for allowing free movement of wildlife across political boundaries and checking smuggling of wildlife across the Kanchenjunga Landscape, a trans-boundary region spread across Nepal, India and Bhutan.

The developments comes up after forest officials and representatives of non-government organisation of the three countries visited parts of the landscape and later held a meeting at Siliguri in north Bengal earlier this month.

Need for a joint task force:

Setting up of a joint task force is a key requirement in the road map on achieving the objectives of free movement of wildlife and checking smuggling of wildlife.

Context: The Navy will soon put into operation the Information Fusion Centre for Indian Ocean Region (IFC-IOR) to improve maritime security in the region.

The IFC-IOR is being established with the vision of strengthening maritime security in the region and beyond, by building a common coherent maritime situation picture and acting as a maritime information hub for the region.

The IFC has been established at the Navy’s Information Management and Analysis Centre (IMAC) in Gurugram, which is the single point centre linking all the coastal radar chains to generate a seamless real-time picture of the nearly 7,500-km coastline.

The IOR has a diverse set of littorals and island nations, each with their unique needs, aspirations, interest and values. Rise in maritime piracy in the region has had its impact worldwide, which shows how important these waters are to the nations and economies the world over.

The Indian Ocean is important for the following reasons:

For Prelims and Mains: Key features and significance of T- RMN.

Context: India has signed the ascension agreement to the Trans Regional Maritime Network (T-RMN). The multilateral construct comprises of 30 countries and is steered by Italy.

The network facilitates information exchange on the movement of commercial traffic on the high seas.

Such multilateral agreements are necessitated due to the large traffic in the Indian Ocean which cannot be entirely monitored by any one nation.

National Mission for Clean Ganga (NMCG) made its effort to reduce pollution in river Ganga when PM inaugurated projects in Prayagraj including 175 KM of sewerage network.

It was registered as a society on 12th August 2011 under the Societies Registration Act 1860.

It acted as implementation arm of National Ganga River Basin Authority (NGRBA), constituted under the provisions of the Environment (Protection) Act (EPA), 1986.

The Act envisages five-tier structure at national, state and district level to take measures for prevention, control and abatement of environmental pollution in river Ganga and to ensure continuous adequate flow of water so as to rejuvenate the river Ganga as below:

Mains Question: To hear the call of the Ganga, both political will and ethical responsibility are required. Analyse in the context of recent developments with respect to Ganga River.

Context: India’s first railway university has been opened in Vadodara– It is named as the National Rail and Transportation Institution (NRTI).

Context: The National Tiger Conservation Authority’s (NTCA) has released a report tiger mortality in the country.

The National Tiger Conservation Authority is a statutory body under the Ministry of Environment, Forests and Climate Change constituted under enabling provisions of the Wildlife (Protection) Act, 1972, as amended in 2006, for strengthening tiger conservation, as per powers and functions assigned to it under the said Act.

The functions of NTCA are as follows:

Context: India celebrated Vijay Diwas on 16th December 2018 marking the 47th anniversary of its victory over Pakistan in the 1971 war.

Campaign launched to save the Great Indian Bustard from extinction:

Significant threats to the GIB:

About the Great Indian Bustard:

Great Indian Bustard is listed in Schedule I of the Indian Wildlife (Protection)Act, 1972, in the CMS Convention and in Appendix I of CITES, as Critically Endangered on the IUCN Red List.

It has also been identified as one of the species for the recovery programme under the Integrated Development of Wildlife Habitats of the Ministry of Environment and Forests, Government of India.