Insights into Editorial: An invention to corruption? 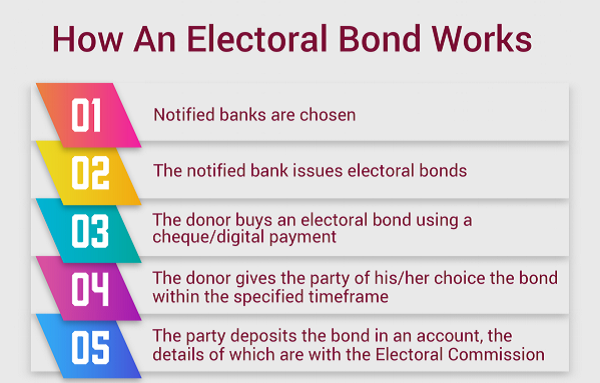 The government introduced an Electoral Bond Scheme purportedly with a view to cleansing the prevailing culture of political sponsorship.

But the programme’s failings have been so blindingly obvious, and its consequences so utterly devastating to rectitude and transparency in government.

Even O.P. Rawat, who just retired Chief Election Commissioner, thought it fit to deliver a damning indictment of the scheme.

“There are many grey areas in this because when there is no ceiling on party expenditure and the EC (Election Commission) cannot monitor it, how can you be sure that what is coming in is not black money as there is a secrecy of the donor”.

Electoral Bond is a financial instrument for making donations to political parties. These are issued by Scheduled Commercial Banks upon authorization from the Central Government (“the CG”) to the intending donors, but only against cheque and other digital payments (in other words, it cannot be purchased using cash).

These bonds shall be redeemable in the designated account of a registered political party prior to the expiry of the life of the bonds.

The bonds are open for purchase by all citizens of India.

Only registered political parties that have secured not less than 1 per cent of the votes polled in the latest general election to the Lok Sabha or a State Assembly are eligible to receive them.

The bonds have to be deposited within 15 days of issue in the authorised bank branch of the party; it can be encashed only through the same account.

The process of how electoral bonds are proposed to be rolled out:

Electoral bond was announced in the Union Budget 2017-18.

Role of Reserve Bank of India:

CG is in the process of framing a Scheme in this regard. Section 31 of the RBI Act gives power to issue bearer bonds to RBI and government. The bearer bond has the characteristic of a currency.

The RBI Act states that other than the Central Bank and the CG, nobody can issue notes which have the characteristic of a banknote or a currency note.

Hence, the government’s move to amend the Act to allow commercial banks to issue such bonds is leading to some discomfort among RBI officials who feel it will erode some of the Central Bank’s authority.

The scheme also suffers from at least two foundational defects.

Even as early as in 1957, in a pair of judgments outstanding in their lucidity and prescience, the Bombay and the Calcutta High Courts warned Parliament of the perils in allowing companies to freely add to party coffers.

Bombay High Court said it is something which is likely to “grow apace and which may ultimately overwhelm and even throttle democracy in the country”.

The Calcutta High Court had made an almost identical appeal.

“To the cynic it appears to be a plea of the company to have a legal sanction to bribe the Government of the day, to induce policies that will help the company in its business”.

If amendments of this kind were allowed, and if joint stock companies serve as adjuncts to political parties, the Court added, the “man who pays the piper will then call the tune”.

The above two judgments clearly recognised the bedrock principle of democracy.

Over the years, efforts have been made to endorse opacity in political funding. Electoral Bonds Scheme, which represents the latest such assault, may well irredeemably damage India’s democratic edifice.

There’s no doubt that the Constitution does not contain an explicitly enforceable right to vote. But implicit in its guarantees of equality and free speech is a right to knowledge and information.

Our courts have nearly consistently seen “freedom of voting” as distinct from the right to vote, as a facet of the right to freedom of expression and as an essential condition of political equality.

In the absence of complete knowledge about the identities of those funding the various different parties, it’s difficult to conceive how a citizen can meaningfully participate in political and public life.