Insights into Editorial: On the table, a climate ‘rulebook’ 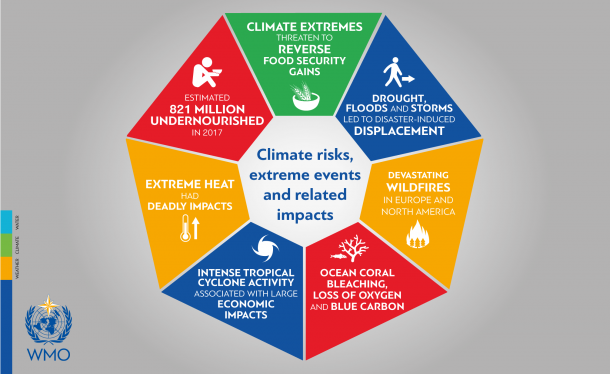 Air pollution is now the fourth-highest cause of death worldwide. Long-term exposure to air pollution contributed to the death of 6.1 million people in 2016.

According to the UN Emissions Gap Report 2018, “global greenhouse gas emissions show no signs of peaking.”

Two years ago, at the COP22 meeting in Marrakech, countries had set themselves a 2018 deadline for the completion of the “rulebook”.

That is because most of the issues to be dealt with and agreed upon, notably those relating to finance, technology, and MRV, are highly contentious, and the negotiators face an uphill task in their attempt to wrap it up in the next two weeks.

The World Meteorological Organization reported that global average surface temperatures in 2018 was all set to be the fourth highest ever recorded. The 20 warmest years have all been in the last 22 years, with the top four being the last four years.

Climate negotiators from around the world have gathered in Poland to renew their efforts towards finalising a global action plan to prevent adverse impacts of climate change.

The annual meeting, informally called COP24 (short for the 24th Conference of the Parties to the UN Framework Convention on Climate Change), is being organised this time in Katowice, an important city in southern Poland’s coal belt.

The Summit will focus on delivering three key outcomes:

The Summit will focus on driving action in six areas:

The main task on the hands of negotiators gathered in Katowice (locate in map as well) would be to finalise the “rulebook” for the implementation of the Paris Agreement, and came into effect the following year after the required number of countries had ratified it.

For the last two years, negotiators have been working on formulating the rules, procedures, guidelines, and institutional mechanisms through which the provisions of the Paris Agreement would be implemented.

These include such things as agreeing on accounting standards:

At the same time, there is a growing noise about the need to aim for a 1.5°C target instead of 2°C. Countries would need to do much more to achieve that.

A recent special report by the Intergovernmental Panel on Climate Change (IPCC) on the pathways to the 1.5° target is an important item on the agenda for discussions in Katowice.

Without zero emission transport, holding the increase in global average temperature to well below 2 degrees C and pursuing efforts to limit warming to 1.5 degrees C will simply be impossible.

It is being held amidst a series of fresh warnings that current measures announced by countries, some already under way and others to be implemented in the coming years, were hugely inadequate for achieving the agreed objective of keeping the rise in global temperatures within 2°C from pre-industrial times.

Countries go into the meeting with the realisation that they are under tremendous pressure, more than at any other time, to enhance the scope and ambition of their climate actions.

Way Ahead: The race to “Net zero”:

The climate talks are taking place amid calls for more ambition to keep temperatures within 1.5 degrees C of pre-industrial levels.

In a report by the UN Intergovernmental Panel on Climate Change (IPCC) warned the planet could reach that level by as early as 2030, based on current levels of greenhouse gas emissions.