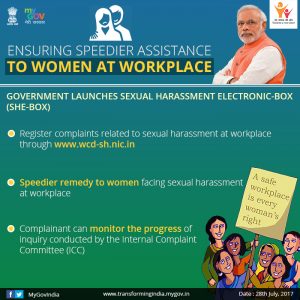 For Prelims and Mains: She- Box, objectives and significance.

Context: The Ministry of Women and Child Development has linked SHe-Box, the online portal to report complaints of Sexual Harassment at Workplace, to all the Central Ministries, Departments and 653 districts across 33 States/Union Territories.

What is it? It is an online complaint management system for registering complaints related to sexual harassment at workplace. It was launched by the Ministry of Women and Child Development. The complaint management system has been developed to ensure the effective implementation of Sexual Harassment of Women at Workplace (Prevention, Prohibition and Redressal) Act (the SH Act), 2013.

How it works? Once a complaint is submitted to the portal, it will be directly sent to the Internal Complaints Committee (ICC) of the concerned Ministry/Department/PSU/Autonomous Body etc. having jurisdiction to inquire into the complaint. Through this portal, WCD as well as complainant can monitor the progress of inquiry conducted by the ICC.

Significance of the portal:

This portal is an initiative to provide a platform to women working or visiting any office of Central Government (Central Ministries, Departments, Public Sector Undertakings, Autonomous Bodies and Institutions etc.) to file complaints related to sexual harassment at workplace under the SH Act. Those who had already filed a written complaint with the concerned Internal Complaint Committee (ICC) constituted under the SH Act are also eligible to file their complaint through this portal. It is also an effort to provide speedier remedy to women facing sexual harassment at workplace as envisaged under the SH Act.