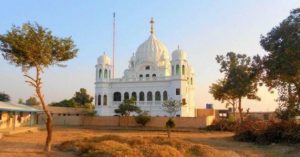 For Prelims and Mains: Location and significance of the corridor, issues involved in its construction.

Context: In a significant decision, the Union Cabinet approved the building and development of the Kartarpur corridor from Dera Baba Nanak in Gurdaspur district to the international border, in order to facilitate pilgrims from India to visit Gurdwara Darbar Sahib Kartarpur on the banks of the Ravi river, in Pakistan, where Shri Guru Nanak Devji spent eighteen years. Pilgrims would then be able to visit the holy shrine throughout the year.

The gurdwara in Kartarpur stands on the bank of the Ravi, about 120 km northeast of Lahore. It was here that Guru Nanak assembled a Sikh community and lived for 18 years until his death in 1539. The shrine is visible from the Indian side, as Pakistani authorities generally trim the elephant grass that would otherwise obstruct the view. Indian Sikhs gather in large numbers for darshan from the Indian side, and binoculars are installed at Gurdwara Dera Baba Nanak.

Sikh jathas from India travel to Pakistan on four occasions every year — for Baisakhi, the martyrdom day of Guru Arjan Dev, the death anniversary of Maharaja Ranjit Singh, and the birthday of Guru Nanak Dev. These Indian pilgrims are given access to all gurdwaras in Pakistan.

The “corridor” would bring Pak infrastructure right up to the Indian border. Over the past year, gurdwaras in Pakistan have been used for a pro-Khalistan campaign. Earlier this year, a gurdwara displayed posters and distributed pamphlets for the so-called “Sikh Referendum 2020”, and Pakistan denied permission to the Indian envoy and diplomats to visit it. Pakistan’s intent also remains suspect, and Indian officials are wary of the corridor being misused by both state and non-state actors in that country.