Objective: The Council has been constituted to review and implement identified action points based on the Reports of five Working Groups, which were established along thematic areas to prepare a roadmap for action.

The terms of reference of the Council states that it shall monitor the implementation of action points for Central Ministries, Institutions and 12 Himalayan State Governments in Indian Himalayan Region which include river basin development and regional cooperation, spring mapping and revival across Himalayas in phased manner for water security; develop, implement and monitor tourism sector standards as well as bring policy coherence, strengthen skill & entrepreneurship with focus on identified priority sectors, among other action points.

Recognizing the uniqueness of the Himalayas and the challenges for sustainable development, Five Working Groups were constituted by NITI Aayog on June 2, 2017. The five thematic reports were released by the NITI Aayog in August, 2018 and framed the action points for the Terms of Reference of the Council constituted.

These Working Groups were tasked with preparing a roadmap for action across five thematic areas namely:

Context: “Aadi Mahotsav” a National Tribal Festival is being organized in New Delhi by the Ministry of Tribal Affairs and TRIFED to celebrate, cherish and promote the spirit of tribal craft, culture, cuisine and commerce.

The theme of the festival is: “A Celebration of the Spirit of Tribal Culture, Craft, Cuisine and Commerce”.

Significance of the event:

As the name of this event Aadi Mahotsav suggests, it is it’s ‘Adi’ factor that is important about them. The Adivasi way of life is guided by primal truths, eternal values and a natural simplicity. The greatness of the tribes lies in this that they have managed to retain the primal skills and natural simplicity. Their creations issue from the depths of time. This quality gives their arts and crafts a timeless appeal. The crudest tribal handicraft instantly touches a primal instinct in all of us. This is particularly true in tribal music and dance. 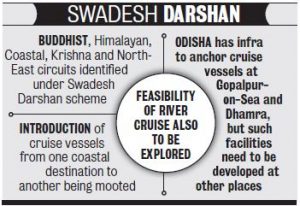 Context: Two important projects under Swadesh Darshan Scheme of Ministry of Tourism, Government of India have been inaugurated at PTSO Lake in Tawang, Arunachal Pradesh.

The scheme is 100% centrally funded for the project components undertaken for public funding. 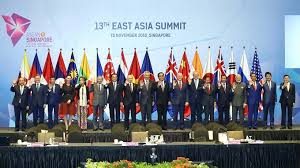 For Prelims and Mains: EAS- composition, objectives, significance for India and issues associated.

Context: 13th East Asia Summit is being held in Singapore.

The East Asia Summit (EAS) is a forum held annually by leaders of, initially, 16 countries in the East Asian, Southeast Asian and South Asian regions. Membership expanded to 18 countries including the United States and Russia at the Sixth EAS in 2011.

EAS meetings are held after annual ASEAN leaders’ meetings. The first summit was held in Kuala Lumpur, Malaysia on 14 December 2005.

EAS is an initiative of ASEAN and is based on the premise of the centrality of ASEAN.

For Prelims and Mains: WCO- composition, objectives, functions and significance.

What is it? WCO is independent intergovernmental body whose mission is to enhance effectiveness and efficiency of Customs administrations. It was established in 1952 as Customs Co-operation Council (CCC). It is the only international organization with competence in Customs matters and is considered as voice of international Customs community.

It is headquartered in Brussels, Belgium.

Composition: It represents 182 Customs administrations across the globe that collectively process approximately 98% of world trade.

Functions: It plays leading role in discussion, development, promotion and implementation of modern customs systems and procedures. It offers range of Conventions and other international instruments, as well as technical assistance and training services to its members. It also actively supports its members in their endeavours to modernize and build capacity within their national Customs administrations.

Topic: agricultural produce and issues and related constraints; e-technology in the aid of farmers.

For Prelims and Mains: NEDAC- objectives, functions and significance.

Context: Meeting of General Assembly of Network for Development of Agricultural Cooperatives in Asia and the Pacific(NEDAC) is being held in New Delhi.

NEDAC was set up in 1991 by the United Nations’ Food and Agriculture Organisation (FAO), the International Cooperative Alliance (ICA) and the International Labour Organisation (ILO). NEDAC sensitises Governments in the region on the role of agricultural cooperatives in promoting agricultural and rural development to ensure rural food and livelihood security for millions of people in Asia and Pacific.

Context: Delhi Police has launched an e-learning portal ‘Nipun’ to impart training and provide up to date information to police officers.

Through this portal Delhi Police officers can now access information by just logging on the portal. They can take course from anywhere at any time. It will make easier for the police officer to upgrade their skills and re-enforce their learning while balancing training time along with their daily routine work. 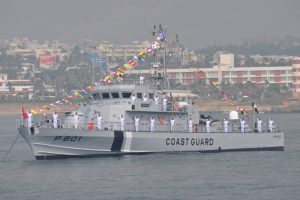 Context: Maldivian Coast Guard Ship (MCGS) Huravee has successfully completed her refit at Naval Dockyard Visakhapatnam and the ship was formally handed over to Maldives recently.

Background: MCGS Huravee was originally commissioned as INS Tillanchang, a Trinkat class patrol vessel built by Garden Reach Shipbuilders and Engineers, Kolkatta in Mar 2001 and was subsequently gifted to Maldives by the Govt of India in Apr 2006 to strengthen the strategic partnership between the two nations and work together to ensure the maritime safety of the Indian Ocean Region. 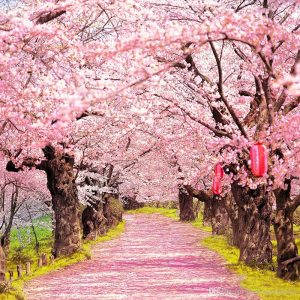 Context: India International Cherry Blossom festival is scheduled to be held from November 14 to 17 in Shillong, Meghalaya.

Significance: This festival is the world’s only autumn cherry blossom festival. The festival is organised by Government of Meghalaya’s Forest & Environment Department as well as by the Institute of Bioresources & Sustainable Development (IBSD) in collaboration with Indian Council for Cultural Relations (ICCR).

Aim: The aim of the festival is to celebrate the unique autumn flowering of Himalayan Cherry Blossoms. The Cherry Blossom tree flowers only for a short period in a year. The festival will showcase full pink and white cherry blossoms found all along the roadside of the famous Ward Lake. Alongside, the festival will also showcase the region’s food, wine and crafts in addition with several cultural events.

What is it? Astronomers have discovered a frozen planet with a mass over three times that of the Earth, orbiting the closest solitary star to the Sun.