Insights into Editorial: Independence and accountability: on RBI 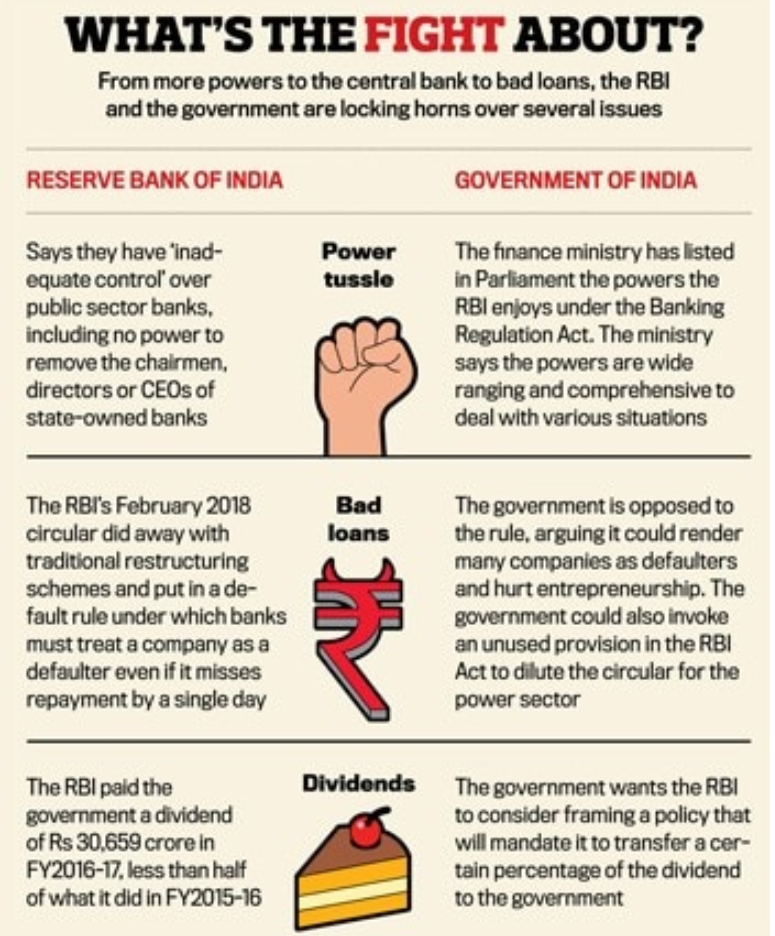 The Reserve Bank of India (RBI) and the government give the impression that they are not on the same page even as far as an understanding of their roles is concerned.

The RBI suggests that its independence is being violated while the government rationalises its intervention in terms of its concern for the economy.

Defining autonomy From the Side of Central bank or from the Government:

The idea of central bank independence began to germinate some two decades ago, this was understood to mean a ‘functional’ independence.

That is, the bank would be unconstrained by the government in its functioning, which includes both the instruments it uses and how it uses them.

However, its autonomy was not to extend to ‘goal’ independence. What the goals of the central bank should be were to be chosen by the government without reference to the bank.

The main issue here was whether the bank should focus on inflation alone or also on the level of employment.

Within a decade of this debate, it had been conceded that the focus would be exclusively on the former, and monetary policy came to be identified with ‘inflation targeting’.

According to a paper published in the International Journal of Central Banking in 2014, RBI was listed as the least independent among 89 central banks considered under the study.

These rankings are likely to have improved since the adoption of inflation targeting in February 2015 and formation of Monetary policy committee in October 2016.

However, vacancies in RBI’s board and government’s reluctance to fill them up raises questions about the decisions taken and whether proper deliberations on those decisions are being held.

During the previous government, a Financial Sector Legislative Reforms Commission was formed which made various recommendations to cut down RBI’s powers.

In 2013, a financial sector monitoring body, called Financial Stability Development Council was established which was to be chaired by the Finance Minister.

In essence, the RBI Act 1934, does not empower RBI absolute autonomy. However, it does enjoy some independence when it comes to performing its regulatory and monetary functions

What is the RBI aggrieved about?

RBI Governor Urjit Patel told a parliamentary panel in June that it does not have enough powers over PSBs. But the RBI does have nominee directors on bank boards.

It leads physical inspection at banks and financial audits. It has also orchestrated mergers between banks whenever a bank has been on the verge of collapse (for instance, Global Trust Bank merged with Oriental Bank of Commerce).

So, the RBI does have adequate control over PSBs but may not be exercising it fully.

The government’s concern for the health of the medium and small enterprises is well-founded.

After all, they were among the most affected sections following the demonetisation of 2016.

If, in the spirit of contriteness as it were, the government wants to reach out to them, the right course would be to provide interest rate subvention, rather than to force the RBI to tweak its lending norms.

There is a severe lack of judgment in loan melas promising online sanction in less than an hour. There is the suggestion in this of the political business cycle, a government trying to nudge the economy prior to an election.

The resistance of the RBI to this desperate action should be understandable.

Monopoly of interpretation and choice of instruments of intervention would always, in an uncertain economy, continue to be a matter of debate.

There is need to pay due regard to both autonomy and accountability. There has to be a forum within our democratic structure where the RBI is obligated to explain and defend its position.

Different countries have taken different routes and by and large each model is appropriately tuned to their specific contexts.

The oft-quoted US example is a good model to work upon.

Presentation by the chairman of the Federal Reserve to the Congress makes for public exposure and transparency but does not take away the chairman’s autonomy.

We need an appropriate and structured forum to strike a balance between unrestrained autonomy and blatant political intervention.