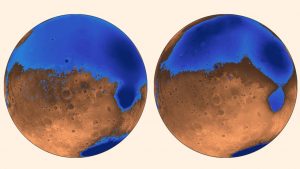 For Prelims and Mains: Highlights and significance of the study.

Context: According to a recent study, Earth’s global ocean water may have originated from both asteroidal material and gas left over from the formation of the Sun. The study gives insights about the development of other planets and their potential to support life.

The early ocean known as Arabia was formed 4 billion years ago on Mars, while the Deuteronilus ocean was formed 3.6 billion years ago. Both coexisted with the massive volcanic province Tharsis, located on the unseen side of the planet, which may have helped support the existence of liquid water; the water is now gone, perhaps frozen underground and partially lost to space, while the ancient seabed is known as the northern plains.

The study challenges widely-accepted ideas about hydrogen in Earth’s water by suggesting the element partially came from clouds of dust and gas remaining after the Sun’s formation, called the solar nebula.

The new finding fits neatly into current theories of how the Sun and the planets formed. It also has implications for habitable planets beyond the solar system. Astronomers have discovered more than 3,800 planets orbiting other stars, and many appear to be rocky bodies not greatly different from our own. 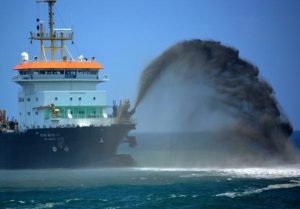 For Prelims and Mains: About Dredging Corporation of India- composition, objectives and functions.

The filling of the SPR will be under PPP model and is being undertaken to reduce budgetary support of Union Government. The SPR facility at Padur is underground rock cavern with total capacity of 2.5 million metric tonnes (MMT) having four compartments of 0.625 MMT each.

India has built 5.33 million tons of underground reserves in three locations, including Padur, under an earlier phase that can meet 9.5 days of the country’s oil needs. The government purchased crude to fill the caverns in Visakhapatnam in Andhra Pradesh and half of another facility in Mangalore in Karnataka, while leasing out the other half to Abu Dhabi National Oil Co.

In 1990, as the Gulf war engulfed West Asia, India was in the throes of a major energy crisis. By all accounts India’s oil reserves at the time were adequate for only three days. While India managed to avert the crisis then, the threat of energy disruption continues to present a real danger even today.

Context: The Union Cabinet has approved a mechanism for sale of enemy shares which at the current price is estimated at around Rs 3,000 crore. Sale proceeds are to be deposited as disinvestment proceeds in the government account maintained by the Ministry of Finance. The Department of Investment and Public Asset Management has been authorised to sell the shares.

The decision will lead to monetisation of movable enemy property lying dormant for decades and the proceeds will be used for development and social welfare programmes.

Total shares, known as “enemy shares numbering 6,50,75,877 worth Rs 3,000 crore, are lying unutilised because enemy property act includes movable and immovable property. Of these 996 companies, 588 are functional/ active companies, 139 of these are listed with remaining being unlisted.

What are enemy properties?

When wars broke out between India and China in 1962, and India and Pakistan in 1965 and 1971, the central government took over properties of citizens of China and Pakistan in India under the Defence of India Acts. These Acts defined an ‘enemy’ as a country that committed an act of aggression against India, and its citizens.

The properties of enemies in India were classified as enemy property. The properties included land, buildings, shares held in companies, gold and jewellery of the citizens of enemy countries. The responsibility of the administration of enemy properties was handed over to the Custodian of Enemy Property, an office under the central government. 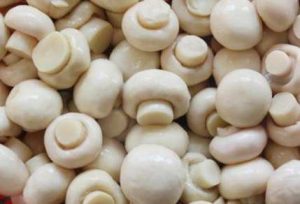 For Prelims and Mains: Bionic mushrooms- meaning, significance and applications.

Context: In their latest feat of engineering, researchers at Stevens Institute of Technology have taken an ordinary white button mushroom from a grocery store and made it bionic, supercharging it with 3D-printed clusters of cyanobacteria that generate electricity and swirls of graphene nanoribbons that can collect the current.

How was it developed?

Researchers used a robotic arm-based 3D printer to first print an “electronic ink” containing the graphene nanoribbons. This printed branched network serves as an electricity-collecting network atop the mushroom’s cap by acting like a nano-probe — to access bio-electrons generated inside the cyanobacterial cells.

Next, they printed a” bio-ink” containing cyanobacteria onto the mushroom’s cap in a spiral pattern intersecting with the electronic ink at multiple contact points. At these locations, electrons could transfer through the outer membranes of the cyanobacteria to the conductive network of graphene nanoribbons. Shining a light on the mushrooms activated cyanobacterial photosynthesis, generating a photocurrent.

Significance and applications of Bionic mushrooms:

This bionic mushroom produces electricity. By integrating cyanobacteria that can produce electricity, with nanoscale materials capable of collecting the current, researchers were able to better access the unique properties of both, augment them, and create an entirely new functional bionic system.

The amount of electricity these bacteria produce can vary depending on the density and alignment with which they are packed, such that the more densely packed together they are, the more electricity they produce.

For Prelims and Mains: NASA’s Ralph and Lucy- objectives and significance of the mission.

Context: NASA’s Ralph and Lucy are all set to explore Jupiter’s Trojan asteroids, which are remnants from the earliest days of our solar system.

Ralph is a space instrument that has travelled as far as Pluto, while Lucy is a mission payload, or the spacecraft which would be carrying various scientific instruments including Ralph to study the properties of the asteroids.

The mission will be launched in 2021 and would be the very first space mission to study the Trojans.

The Trojan asteroids are orbit Sun in two loose groups — one group is always ahead of Jupiter (called the Greek camp) in its path while the other is always behind (called the Trojan camp). The two clusters are stabilized at these two Lagrange points in a gravitational balancing act between the Sun and Jupiter.

What are Lagrange points?

Lagrange points are sweet spots in a planetary orbit where the pull of gravity working from two opposing celestial bodies is balanced due to the centripetal force of their orbits.

The name Lucy’ was taken from the name of the fossil of the earliest human ancestor yet discovered. Just like the finding of this skeleton had provided important insight into human evolution, scientists hope the Lucy mission will also be able to tell us more about our planetary origins.

The Lucy mission payload will explore the Trojan asteroids using:

L’LORRI will take high-definition photos of the Trojans, and L’TES will analyze the heat given off of the Trojans’ surface structures. 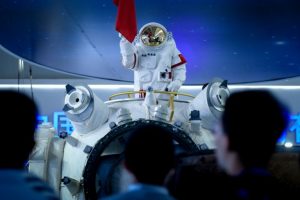 For Prelims and Mains: Key features of Heavenly Palace and ISS.

Context: China has unveiled a replica of its first permanently-crewed space station, which would replace the international community’s orbiting laboratory- the International Space Station (ISS) and symbolises the country’s major ambitions beyond Earth.

About the International Space Station (ISS):

It will be set up in Relli village of Vizianagaram District of Andhra Pradesh. It will be established under Thirteenth Schedule to Andhra Pradesh Reorganisation Act, 2014.

What is it? The British Broadcasting Corporation (BBC) has devised a new campaign that is aimed at fighting back against disinformation and fake news. It lays a major focus on global media literacy, including workshops and debates in countries like India.

The most highlighted initiatives under the Project includes: