Insights into Editorial: Where India, Japan ties stand now and what is planned for the future 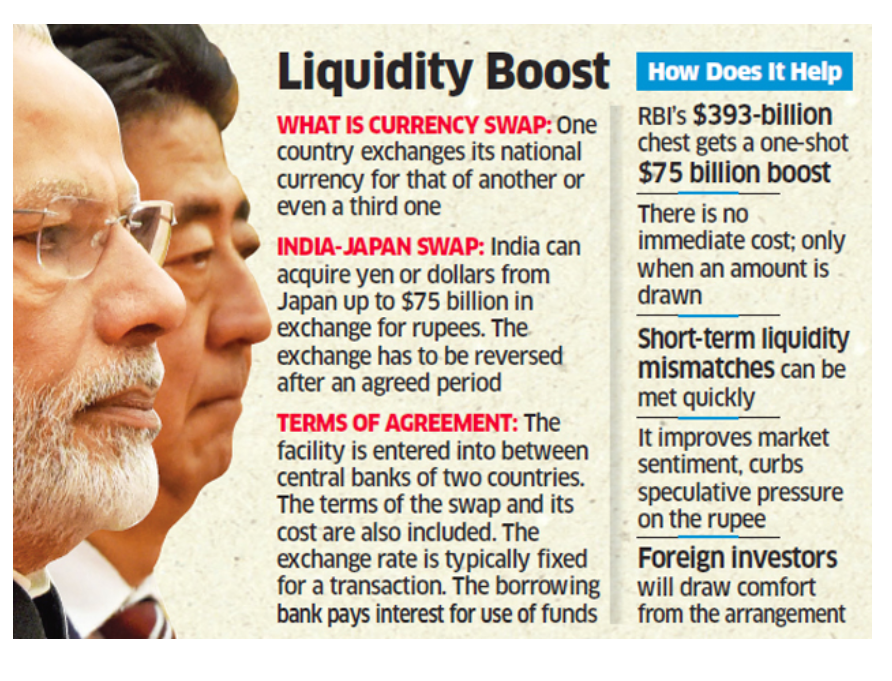 The 13th India-Japan annual summit commenced with Prime Minister Narendra Modi and his Japanese counterpart Shinzo Abe visiting a factory of FANUC Corporation, one of the largest makers of industrial robots in the world.

The visit to the FANUC facility was important in the context of India’s move towards Industry 4.0 by leveraging developments in the fields such as AI, IoT, 3D printing and robotics.

India-Japan relations in Recent past:

The Japan-India Association was set up in 1903, and is one of the oldest international friendship bodies in Japan.

As the 13th India-Japan annual summit got under way, Japan had pledged Rs 33,800 crore in government and private sector investments following the first Modi-Abe meeting in 2014.

The two countries having signed a Comprehensive Economic Partnership Agreement (CEPA) in 2011 to facilitate growth in bilateral trade. This was described as the most comprehensive of all such agreements concluded by India covering trade in goods and services, movement of persons, investments, intellectual property rights, Customs procedures and other trade related issues.

The CEPA envisages abolition of tariffs on over 94% of items traded between India and Japan over a period of 10 years.

Now “Currency Swap Agreement” between India and Japan: How it will help India:

The big announcement was the decision to conclude a $75 billion bilateral currency swap agreement, which is expected to help stabilise fluctuations in the value of the rupee vis-a-vis the dollar, and bring down the cost of capital for Indian companies while accessing foreign capital markets.

It involves the exchange of interest and sometimes principal in one currency, for the same in another currency. This facility will enable the agreed amount of foreign capital being available to India for use as and when the need arises.

The facility will serve as a second line of defence for the rupee after the $ 393.5 billion of foreign exchange reserves.

It would not only enable the agreed amount of capital being available to India, it will also bring down the cost of capital for Indian entities, while accessing the foreign capital market.

Big-ticket investments by Japan in India:

Recently, a ‘Cool EMS Service’ was started, under which Japanese food items permissible under Indian regulations are transported in cool boxes from Japan to India through postal channels.

Both sides are striving to push a digital partnership, with the NITI Aayog being the nodal point on the Indian side, and the Ministry of Economy, Trade and Industry on the Japanese side. Areas of potential collaboration include AI, IoT, and big data.

The two sides also decided to start negotiations on the crucial Acquisition and Cross-Servicing Agreement (ACSA), which will enhance the strategic depth of bilateral security and defence cooperation.

Another new area where India is likely to make a pitch is for greater synergy or integration between the Ayushman Bharat project and the Japanese programme called Asia Health and Wellbeing Initiative, including how to leverage Japan’s strengths in areas such as medical equipment and hospitals.

The two leaders shared their view that in order to achieve shared vision, India and Japan must endeavour to work together for a rules-based and inclusive world order that fosters trust and confidence by enhancing communication and connectivity to ensure rule of law, unimpeded trade and flow of people, technology and ideas for shared prosperity.

21st century will be Asia’s century and Indo-Japan ties will play a key role in shaping it. Both have agreed to start the 2+2 dialogue. It’s objective is to promote peace and stability in the world.”