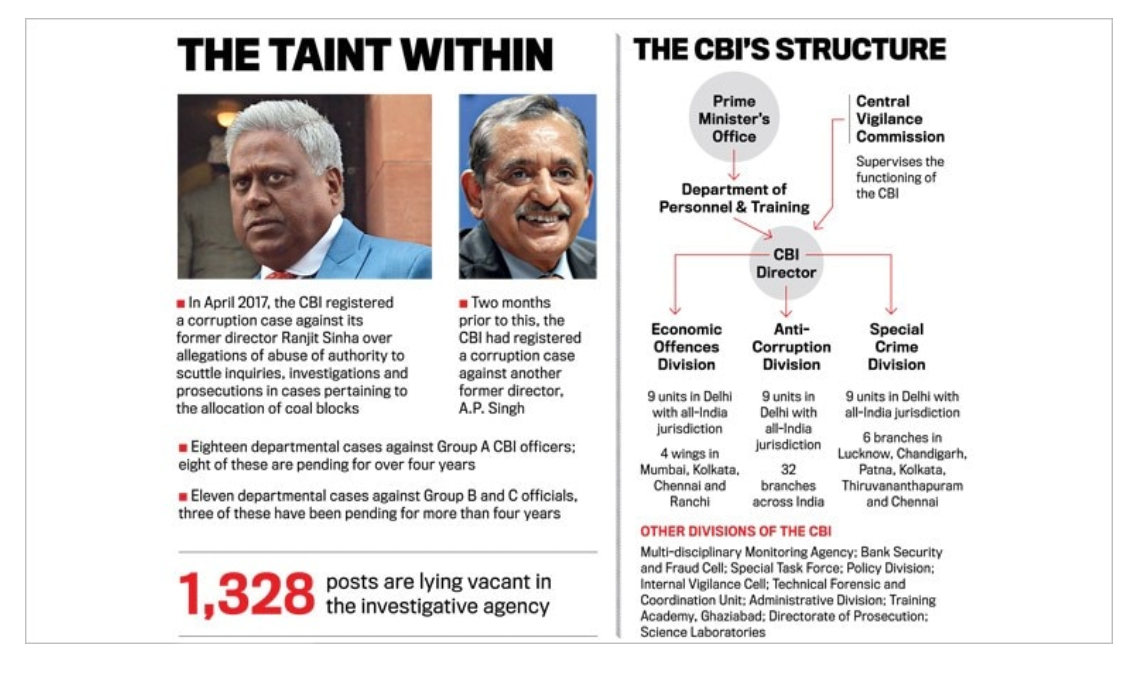 The recent happenings at the CBI are unprecedented. Never has the premier investigating agency of the country been in similar crisis. These events will have ramifications on the dignity, discipline and image of CBI.

The question that should be troubling us is how are things so opaque within our investigative agency?

With serious charges and counter-charges flying thick and fast, the ordinary citizen may be left wondering as to what really goes on behind closed doors at the CBI.

The Central Bureau of Investigation (CBI) is the premier investigating agency of India. Operating under the jurisdiction of the Ministry of Personnel, Public Grievances and Pensions, the CBI is headed by the Director. The agency has been known to investigate several economic crimes, special crimes, cases of corruption and other high-profile cases.

India’s first agency to investigate corruption, the Special Police Establishment, was set up in 1941, six years before independence from British rule to probe bribery and corruption in the country during World War II.

In 1946, it was brought under the Home Department and its remit was expanded to investigate corruption in central and state governments under the Delhi Special Police Establishment Act.

The special police force became the Central Bureau of Investigation after the Home Ministry, which is in charge of domestic security, decided to expand its powers and change its name in 1963.

The CBI is subject to three ministries of the Government of India and Two Constitutional bodies:-

The CVC inquiry will be conducted under the supervision of Former Apex Court judge, Justice A.K.Patnaik.

Mr.Nageswara Rao will take care of only routine tasks to keep the CBI functioning. He is barred from taking any major or policy decisions.

The Crisis Is Not About CBI, It’s About the Rule of Law:

But this is not about two IPS officers; it is not even about the CBI or its presumed image or its subverted autonomy, It is about the future of the rule of law.

Its played a pivotal role in criminal justice delivery as highlighted in tough cases like Satyam scam investigation , Bhanvari Devi Murder etc. However myriad of responsibilities over categories like Corruption & fraud , economic crimes , special crimes including terrorist attacks has overburdened it and reduced its efficiency.

Various recommendation has been made in the regard of reforming CBI but none of them have implemented so far such as:

L.P singh committee has recommended the enactment of comprehensive central legislation for self sufficient statutory charter of duties and functions.

Parliamentary standing committee (2007) recommended that a separate act should be promulgated in tune with requirement with time to ensure credibility and impartiality.

What will be the Way Forward?

Rule of law is much more than a set of interlocking procedures and principles; it is a sense of shared confidence among citizens and other constitutional stakeholders that values of justness and fairness are not subject to the whims and fancies of the rulers of the day.

The CBI is not really popular among the youth who are looking for Central government employment through the Union Public Service Commission examination route, other than those appearing for the All India Services, including the Indian Police Service. This makes a case for a fresh look at the service conditions for direct recruitment to the CBI.

A comprehensive act of Parliament setting out the autonomy, powers, etc. is the first step towards improving the CBI’s autonomy.

CBI is an agency of Central Government that has wide range of investigating areas and powers. It was formed with a goal to check corruption and other crimes in the nation and so it shall maintain a clean image of itself.

The goal of reforms should be to make CBI more autonomous in nature by seeing examples of exceptional well run agencies like CIA ,FBI in USA. Greater Political will is required to achieve it which should also keep in mind that it will not deprive them (CBI) of accountability.