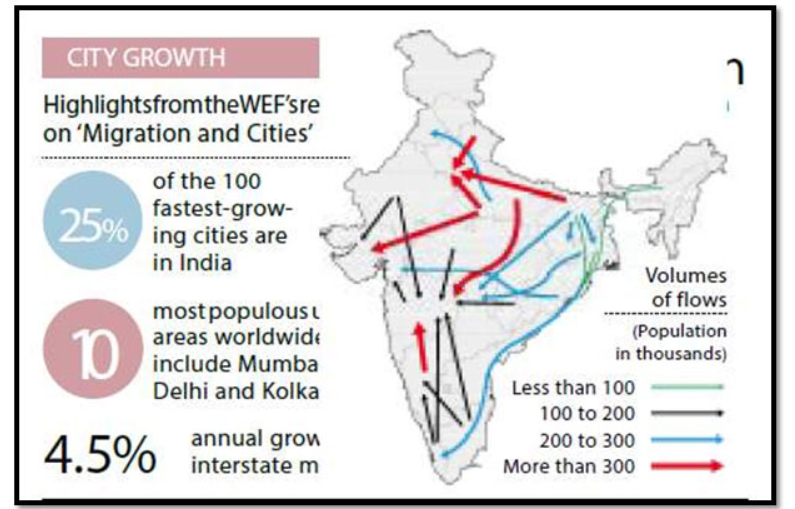 According to the State of World Population report, more than half of the world’s population lives in urban areas, and the number is steadily growing every year.

India, where the majority of the population is still dependent on agriculture, is no exception to this trend. As per the census, the level of urbanization in India has increased from 27.81% in 2001 to 31.16% in 2011.

Urbanization in India is a consequence of demographic explosion and poverty-induced rural-urban migration.

Gujarat is one of the top States in India that receive migrant workers, largely temporary and seasonal, on a large scale.

In Gujarat, they work in unskilled or semi-skilled jobs in a wide range of activities such as in agriculture, brick kilns and construction work, salt pans and domestic work, petty services and trades (food and street vending).

Some workers may got in semi-skilled works like in textiles and garments, embroidery and diamond cutting and polishing, small engineering and electronics and also small and big factories.

These workers are from Rajasthan, Madhya Pradesh, Maharashtra and even from as far as Bihar, Uttar Pradesh, Andhra Pradesh, Odisha, Jharkhand, Chhattisgarh, Assam and Karnataka.

How this Internal Migration has been taken place:

A new township in Gujarat being promoted by a large industrialist is to be built with workers from Assam.

Surprisingly, the Gujarat government has no data on/estimates of migrant workers coming to Gujarat. Informally, the figures are estimated to be between 40lakh to one crore.

Segmenting the labour market and creating a separate labour market for migrant workers who are easy to exploit has been a common strategy of employers across India.

The pathetic conditions migrant workers face has been widely documented. They earn low wages, work very long hours without any overtime benefits, and are almost without any leave or social protection.

Lakhs of unskilled and migrant workers live on worksites in makeshift huts (usually made of tin sheets) or on roads, slums and in illegal settlements not served by municipalities.

They are neither able to save much to improve their conditions back in their home States nor save enough to live comfortably in Gujarat. They go back home only once or twice to celebrate festivals.

Semi-skilled workers with some education and skills (such as those in diamond cutting and polishing units, power looms and factories) get slightly higher wages and earn some leave.

However, these workers are also exploited in multiple ways and are mostly unprotected. Factory owners, employers and traders are only too happy with such a situation as they earn huge profits from wage labour exploitation.

Resentment in The Local Workforce:

Local workers resent the presence of migrant workers. They feel that their jobs are taken away by them. The migrants work for lower wages.

Overall, there is a feeling among the native workers that the factories/ establishments are dependent on migrant workers, so as to earn more profits.

Many migrant workers have now rushed out to their home States out of fear despite several local people having been taken into custody on the charge of inciting violence against migrant workers.

There have been reports of an estimated 60,000 to more than a lakh workers leaving the State. Those who have stayed back now live under constant fear.

Rights and Entitlements of Migrant Workers: Only on paper

Under the Inter-State Migrant Workmen Act and other labour laws (for unorganised workers), migrant workers in Gujarat are legally entitled to all their basic labour rights.

These include minimum wages, regular wage payment, regular working hours and overtime payment, and decent working and living conditions which include taking care of the health and education of their children.

Under the same Act, the governments of the States from where migrant workforce originate are expected to issue licences to contractors who take workers away, register such workers and also monitor their working and living conditions in other States.

But most State governments remain indifferent to these laws. Gujarat has taken a few steps but these are far from adequate.

In the political sphere, there has been hardly any mention about protecting the legal rights of migrant workers in India.

The political impulse has been to maintain status quo the continuation of the situation where migrant workers are exploited.

The real solution to this issue would be to enforce all relevant labour laws for migrant workers so that segmentation of the labour market becomes weak, and workers (local and migrant) get a fair and equal deal in the labour market.

This will also weaken unfair competition between local and migrant labour and enable migrant workers either to settle down in the place of destination or to go back home and make a good living there.

State and Central governments should genuinely take interest in improving the conditions of workers in the economy.

To achieve that, the government needs to recognize that internal migrants may play a bigger role in India’s economic future than its more celebrated emigrants abroad.