Topic: Structure, organization and functioning of the Executive and the Judiciary Ministries and Departments of the Government; pressure groups and formal/informal associations and their role in the Polity. 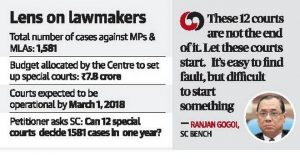 Context: The Supreme Court has upped the ante on the States, Union Territories and High Courts which have not provided it with details of criminal cases pending against sitting lawmakers, warning that their Chief Secretaries and Registrars General will be made personally liable for non-compliance.

The apex court had on December 14 last year ordered special courts to be established to fast track the long-pending trials against MPs and MLAs in a bid to weed out corruption and criminality in politics. So far, the centre has set up 12 special courts to deal such cases.

There are several high-profile cases against leaders from almost all political parties—regional and national where investigations have dragged on for years and those facing trial have evaded prison.

The Centre’s decision could be a setback to politicians who, despite facing serious charges, have remained members of Parliament and state assemblies due to time consumed in trials. Such cases will fall in the purview of special courts and their fate will be decided expeditiously.

The court has given 11 States/Union Territories (UTs) and the High Courts of Karnataka, Kerala and Tripura a deadline of four weeks to comply with its September 12 order.

The order has called on States/UTs to furnish data to determine the number of special courts to be set up across the country to exclusively try accused legislators.

The States/UTs which have not complied with the September 12 order are Goa, Himachal Pradesh Meghalaya, Mizoram, Punjab, Rajasthan, Uttarakhand, Chandigarh, Dadra and Nagar Haveli, Daman & Diu and Lakshadweep. 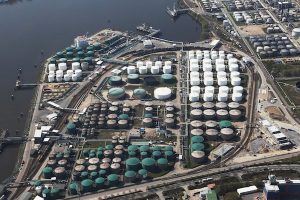 Context: India is planning to forge partnerships with private players to build out its strategic petroleum reserves within the coming year.

India has built 5.33 million tons of underground reserves in three locations, including Padur, under an earlier phase that can meet 9.5 days of the country’s oil needs. The government purchased crude to fill the caverns in Visakhapatnam in Andhra Pradesh and half of another facility in Mangalore in Karnataka, while leasing out the other half to Abu Dhabi National Oil Co.

Indian Strategic Petroleum Reserves, which was formed in 2006, is scouting investors to fill the caverns at Padur. It will hold roadshows in New Delhi, Singapore and London this month to draw investors for the new caverns as well as filling the Padur facility.

In 1990, as the Gulf war engulfed West Asia, India was in the throes of a major energy crisis. By all accounts India’s oil reserves at the time were adequate for only three days. While India managed to avert the crisis then, the threat of energy disruption continues to present a real danger even today.

It is unlikely that India’s energy needs will dramatically move away from fossil fuels in the near future. Over 80% of these fuels come from imports, a majority of which is sourced from West Asia. This is a major strategic risk and poses a massive financial drain for an embattled economy and its growing current account deficit.

To address energy insecurity, the Atal Bihari Vajpayee government mooted the concept of strategic petroleum reserves in 1998. Today, with India consuming upwards of four million barrels of crude every day (January 2015 figures), the case for creating such reserves grows stronger.

For Prelims and Mains: Highlights and significance of the programme.

The programme is a part of the Union Government’s efforts to emphasise on the importance of road safety, as recent times have seen an alarming rise in road fatalities especially among the youth.

The programme will help the government achieve its target of reducing road accidents by 50 percent by 2020. It will help improve road safety awareness amongst the young adults by inculcating behavioural change and creating awareness about responsible driving habits.

India accounts for 12.5 per cent (over 1.45 lakh fatalities a year) of global road accidents, with one road accident occurring every four minutes. Alarmingly, 72 per cent victims involved in such road mishaps are between the age groups of 15-44 years with speeding, reckless and drunk driving being the top reason accounting for 1.5 per cent of road traffic accidents and 4.6 per cent of fatalities.

Some of the major factors resulting in high road accidents include rash driving, drunken driving and the lack of adequate safety measures like not wearing helmets.

For Prelims and Mains: Saubhagya scheme and its significance.

Context: Ministry of Power and New & Renewable Energy has announced an award scheme under Saubhagya to felicitate the DISCOMs / Power Department of the States and their employees for achieving 100% household electrification in their area of operations. It includes cash prize and certificate of appreciation.

About the award scheme:

Eligibility: Awards would be provided for achieving 100% household electrification at DISCOM/Power Department level of the States. Eight States which have already achieved more than 99% household electrification prior to launch of Saubhagya (Andhra Pradesh, Gujarat, Goa, Haryana, Himachal Pradesh, Kerala, Punjab and Tamil Nadu), are ineligible for participation under the award scheme. All the remaining States and their Discoms are eligible for the award.

Scope of the Scheme:

What are IMF Quotas?

The IMF is a quota-based institution. Quotas are the building blocks of the IMF’s financial and governance structure. An individual member country’s quota broadly reflects its relative position in the world economy. Quotas are denominated in Special Drawing Rights (SDRs), the IMF’s unit of account.

Resource Contributions: Quotas determine the maximum amount of financial resources a member is obliged to provide to the IMF.

Voting Power: Quotas are a key determinant of the voting power in IMF decisions. Votes comprise one vote per SDR100,000 of quota plus basic votes (same for all members).

Access to Financing: The maximum amount of financing a member can obtain from the IMF under normal access is based on its quota.

SDR Allocations: Quotas determine a member’s share in a general allocation of SDRs.

The IMF’s Board of Governors conducts general quota reviews at regular intervals (no more than five years). Any changes in quotas must be approved by an 85% majority of the total voting power, and a member’s own quota cannot be changed without its consent.

Two main issues addressed in a general quota review are the size of an overall quota increase and the distribution of the increase among the members.

Trade ministers of 16-member RCEP bloc, including India and China, have urged all participating countries to continue to exert all efforts for early conclusion of the negotiations.

The meeting assumes significance as there is a tremendous pressure on India to conclude the negotiations as early as possible despite the fact that several issues pertaining to goods and services have yet to be agreed upon by the member countries.

Greater access to Chinese goods may have impact on the Indian manufacturing sector. India has already got massive trade deficit with China.

There are demands by other RCEP countries for lowering customs duties on a number of products and greater access to the market than India has been willing to provide.

Challenges ahead for India:

More developed countries such as Australia and Singapore are unwilling to accommodate India’s demands to liberalise their services regime and allow freer mobility of Indian workers.

The negotiations on the Regional Comprehensive Economic Partnership, among 16 Asian and Pacific Ocean countries, have entered a decisive phase. Most potential member-countries of the grouping would like to see a “substantive agreement” on the trade deal by the end of this year.

At a meeting in Singapore countries which still have issues with the outline of the agreements reached so far may be told politely to step aside and allow a smaller group to go ahead with finalising the RCEP.

Context: Delhi government has launched Chief Minister’s Urban Leaders Fellowship Programme that seeks to attract young leaders across the country to work with it on addressing some of the most pressing urban challenges.

Who are they? They are a heterogeneous Bhutanese people of Nepalese descent. The Lhotshampa people are native to southern Bhutan. The Nepali-speaking Lhotshampa were branded as immigrants and stripped of citizenship rights when the then-king introduced a “One Nation, One People” policy in 1985. The edict made following the customs of the Buddhist majority mandatory, including wearing their traditional dress, and speaking Nepali was banned.

Why in News? Bhutan is holding elections this week. But the Lhotshampa people, brutally driven out of the small kingdom in the 1990s, won’t be voting. Bhutan still describes the Lhotshampa as immigrants, justifying its nationalistic laws as essential for cultural identity and political stability.