Insights into Editorial: When a woman is harassed at work 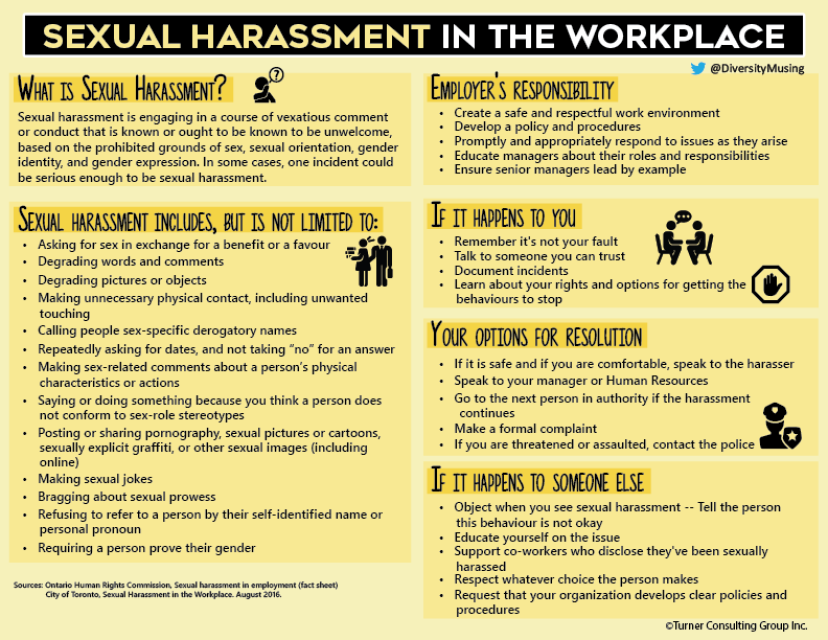 Accusations of sexual assault have spread across India’s social media as the #MeToo movement took aim at prominent journalists, writers, editors and a comedian.

Scores of women, many journalists, came out this week with accounts of sexual harassment from colleagues and editors, accusing them of indecent remarks, unwanted touches, demands for sex, and the dissemination of pornography.

Many personal stories of anger and guilt, buried under years of silence, emerged out to public media because of this recent campaign.

The last couple of years have seen a tidal wave of sexual allegations and accusations against men in professionally powerful positions across the globe, and it seems that finally, this wave has now reached Indian shores.

Supreme Court in a judgment in 1997 laid the Vishaka guidelines, which are legally binding, defined sexual harassment and imposed three key parameters on the institutions i.e., prohibition, prevention and redressal.

The Supreme Court directed that they establish a Complaints Committee, to look into the harassment at the workplace.

This Act lays down the procedures for a complaint and inquiry and the action to be taken.

It mandates that every employer constitute an Internal Complaints Committee (ICC) at each office or branch with 10 or more employees.

It lays down the procedures and defines various aspects of sexual harassment.

A woman can be of any age, whether employed or not, who “alleges to have been subjected to any act of sexual harassment”, that means the rights of all the women working or visiting any workplace, in any capacity, are protected under the Act.

ICC has similar powers to those of a civil court, in respect of the following matters:

While the inquiry is going on, if the woman makes a written request, ICC “may” recommend her transfer, leave for three months, or any other relief as may be prescribed.

When the inquiry is completed, ICC is to provide a report of the findings to the employer within 10 days. The report is made available to both the parties.

If the allegations are proved, ICC recommends that the employer take action for sexual harassment in accordance with the provisions of the service rules. These vary from company to company.

It also recommends that the company deduct from the salary of the person found guilty,

Compensation is based on: Suffering and emotional distress caused to the woman, Loss in career opportunity, Her medical expenses, Income and financial status of the respondent, Feasibility of such payment.

After the recommendations, the aggrieved woman can appeal in Court within 90 days.

If the complaint is found to be false then,

Section 14 of the Act deals with punishment for false or malicious complaints and false evidence.

In such case, ICC “may recommend” to the employer to take action against the woman, or the person who made the complaint, in accordance with the provisions of the service rules.

These health problems can include high blood pressure, poor-quality sleep, anxiety and symptoms of depression, the researchers found after doing medical exams of about 300 women.

The findings are timely given the #MeToo and #TimesUp movements, in which a growing number of women are talking about their sexual harassment and assault experiences, according to a statement about the research, which was published in the journal JAMA Internal Medicine.

This has to be analysed from global perspective in addition to Indian protection laws. (more articles in coming days)

Union Minister for Women and Child Development said they would set up a panel of legal experts to look into the #MeToo allegations.

Civil Society and NGOs are trying to see how the movement can be taken beyond its current confines of urban centres. The hope now is that sexual harassment at workplace will cease to be condoned or brushed under the carpet.

SDG 5 is about gender equality and Sustainable Development Goals are the blueprint to achieve a better and more sustainable future for all.

They address global challenges, including those related to poverty, inequality, climate, environmental degradation, prosperity, and peace and justice.

The Goals interconnect and in order to leave no one behind, the target is to achieve them by 2030.

Sexual harassment and the #MeToo movement resonated at the opening plenary session of the fifth Global Symposium on Health Systems Research with speakers highlighting how this is just the “tip of the iceberg” and there is a long road ahead in achieving sustainable development goals with leaders sometimes being sexual harassers.

The #MeToo movement has shown us that even the most privileged among women have not been spared from cultures of sexual harassment and exploitation.