Insights into Editorial: Rohingya issue: The road to deportation 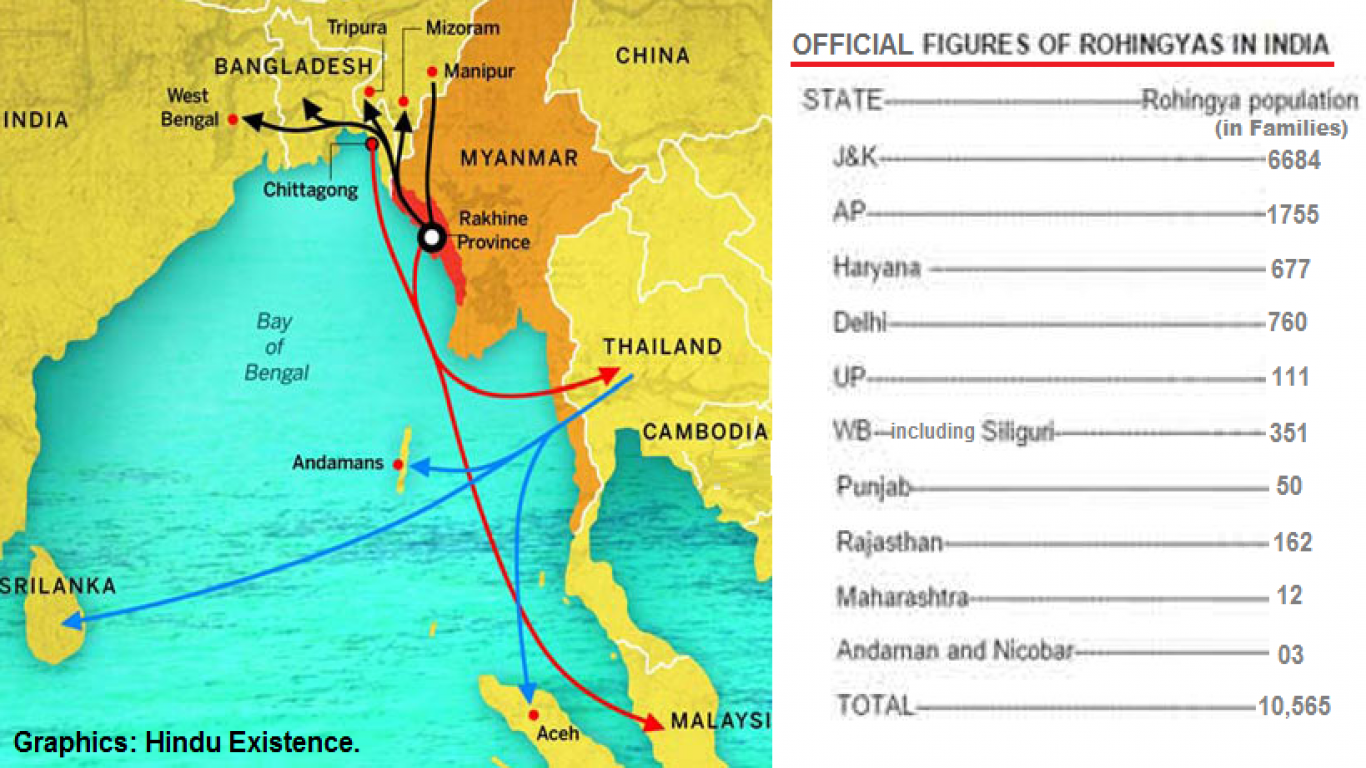 They are an Ethnic group, mostly Muslims. They were not granted full citizenship by Myanmar. They were classified as “resident foreigners or associate citizens”.

They speak a dialect of Bengali and not Burmese. Ethnically they are much closer to Indo-Aryan people of India and Bangladesh than to the Sino-Tibetans of the Country.

They left Myanmar in large numbers, first in 2012, during the first wave of organised attacks against them by the army. Last year, lakhs of them took shelter in Cox’s Bazar area of Bangladesh.

Since 2012, 5 lakh Rohingyas have taken shelter in Saudi Arabia.  There are around 40,000 Rohingyas in India, of which around 5,700 are in Jammu. (more vulnerable for getting recruited by terrorist organisations”.)

Now the seven men being sent back had been held in prison since 2012 for illegal entry. Indian Government has described illegal Rohingya immigrants as posing a national security threat, and ordered state governments last year to identify and deport them.

Concerns with regard to Illegal Migrants:

An illegal immigrant can be:

Illegal migrants “infringe on the rights of Indian citizens” and are “more vulnerable for getting recruited by terrorist organisations”.

Section 3(2)(c) of The Foreigners Act, 1946, gives the Central Government the right to deport a foreign national.

India is not a signatory to the 1951 United Nations Convention and 1967 Protocol Relating to the Status of Refugees, and it does not currently have a national law on refugees.

In 2011, the Union government circulated to all states and Union Territories a Standard Operating Procedure to deal with foreign nationals who claimed to be refugees.

However, the power to identify and deport foreign nationals, who are in India illegally has been delegated to State Governments / Union Territories and the Home Ministry’s Bureau of Immigration.

Customary International Law, has been crystallised as a result of the practice of the States.

Some scholars argue that, the principle is so well enshrined that it constitutes a peremptory norm from which no derogation what so ever is permitted.

India’s tough stand on deporting Rohingyas back to Rakhine State in the midst of the ongoing violence has evoked criticism from national and international human rights activists.

It appealed to India to stay the repatriation. The Indian Government says, the men who belonged to Rakhine Province requested the Myanmar Government in 2016 to issue them documents to return to their Country.

But, UNHCR says a lot has changed since then and the important aspect is ethnic cleansing took place in 2017, which saw nearly a million flee to camps in Bangladesh.

The seven men, who had been imprisoned in Assam since 2012, were denied the opportunity to make an informed decision in the current conditions.

UNHCR strongly feels the current conditions in Rakhine State are not conducive for safe, dignified and sustainable return for the Rohingya.

Has India sent back any other foreigners as well?

Bureau of Immigration data show approximately 330 Pakistanis and approximately 1,770 Bangladeshi nationals have been repatriated during the last three years.

On February 24, 2016, the government told Parliament that in 2014, West Bengal had arrested 3,724 foreign nationals under various sections of The Foreigners Act, 1946, and for violating Immigration Control Rules and Regulations, followed by Tripura (1,713), Tamil Nadu (639), and Maharashtra (228).

India has a stake in the security conditions in upper western Myanmar adjoining the Naga self-administered zone where the Khaplang faction of the National Socialist Council of Nagalim operates.

The success of India’s diplomacy will lie in the extent to which it can induce Naypyitaw to take a long view in the interests of its own political stability, internal security and social harmony.

If such a process can be initiated with the help of Indian diplomacy, the Rohingyas would be able to come out of the genocidal situation in which they find themselves at present.

A modicum of understanding prevails between New Delhi and Naypyitaw with a view to ensuring that the internal security environment in India`s north-eastern states is not jeopardised by the activities of the Khaplang group in Myanmar.

ASEAN, India and Bangladesh need to discuss the Rohingya crisis together to work for an optimum solution to the problem. The first step would be to convince the present government in Myanmar about the benefits of well-coordinated cooperation between ASEAN members, India and Bangladesh to tackle the issue.