Insights into Editorial: A flight path with obstacles 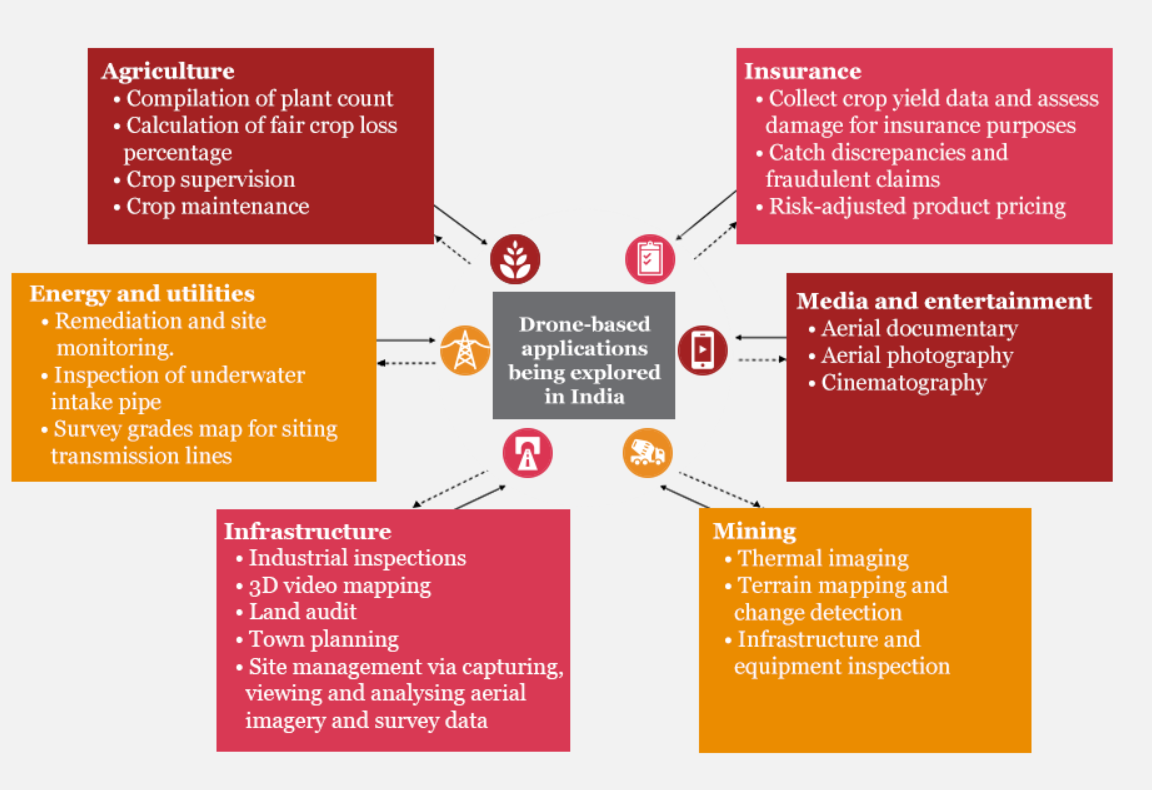 India is one of the fastest-growing markets for unmanned aerial vehicles (UAVs), and one of the top UAV importers for military purposes worldwide, says a report.

According to global market intelligence and advisory firm BIS Research, by 2021, the Indian UAV market will reach USD 885.7 million, while the global market size will touch USD 21.47 billion.

Recent Policy of commercial Drones will be a game-changer:

Businesses across industries ranging from real estate developers to power producers in India will be able to use commercial drones for monitoring, and shipping and delivery operations from 1 December as the government unveiled a landmark policy.

The step could help substantially lower the cost of operations at various industries.

While the rest of the world has been soaring ahead in making the futuristic promise of unmanned flying vehicles a more immediate reality, India has largely been dragging its feet.

Up until the end of August, flying a drone was mostly illegal here.

With the publication of the drone regulations, the Ministry of Civil Aviation has attempted to give some structure to the development of drone infrastructure in India.

While announcing the publication of these guidelines, Civil Aviation Ministry made two points, the contradictions of which also highlight India’s lack of clarity on what it should do with drones.

The security and privacy risks of allowing drones to fly in an unregulated manner are high. However, if India is to reach even the fraction of the $1 trillion potential, it needs to figure out a more balanced manner of regulation.

The current rules are a start, but only in the sense that they free all drones from their previous illegality.

Missing out on working on these applications early enough will likely have serious repercussions to India’s future competitiveness in the field.

Manufacturers of drones as well as technologists and researchers making applications using drones have to test fly these frequently, often several times a day.

In Nyon, Switzerland, agriculture scientists fly a drone to study nitrogen level in leaves, not for a farm as a whole, but for each individual plant.

The drone takes a large number of images, which when fed into a computer model with data on soil condition, weather, time of the year and other information helps analyse which plants are deficient in nitrogen, enabling farmers to add corrective fertilizer, only where necessary.

Sensefly, a Swiss drone manufacturer, has customers around the World, whose use of drones has resulted in higher yields and significantly lower usage of fertilizers and herbicides.

China’s drone economy of manufacturing and development will be worth $9 billion in 2020, while the U.S’s commercial drone market is expected to be $2.05 billion by 2023 (Global Market Insights).

In India, so many Government authorities are involved in allowing permission. It is inevitable that operators could be slapped easily with real and perceived violations.

The regulation provides for a list of identified areas for testing and demonstration. Flying drones in those areas comes with less paperwork. But, however, the locations are far from technology and development hubs.

Filing a series of applications in multiple copies and waiting for various government departments to respond is not the best way to get started.

For India to compete against these giants, it already has a lot of catching up to do.

The real impact of drones will be in the many applications they will be put to. Agriculture is just one such. They are likely to be the disaster prevention systems, rescue operation leaders, and even public transport providers in the not too distant future.