Insights into Editorial: The road to e-vehicle adoption in India 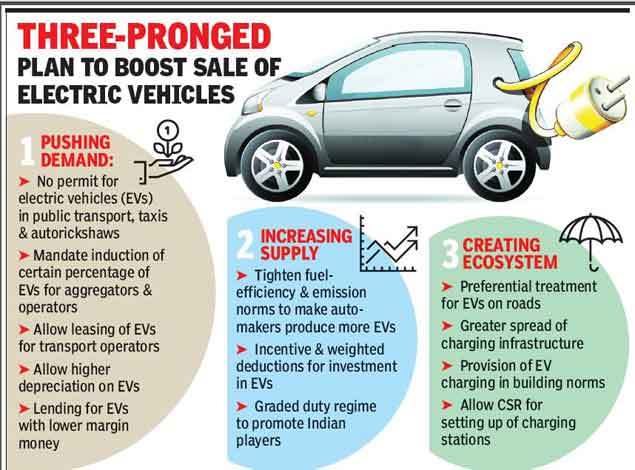 The rupee’s dramatic depreciation in recent months has had an unexpected victim. The Indian electric vehicle (EV) industry has been hit hard.

The reason for this is telling: local production of inputs for EVs is at just about 35% of total input production.

Companies that are in the midst of processing orders for electric cars and buses will now see their production severely affected in terms of production costs. This neatly sums up some of the challenges facing India’s e-vehicle push.

The government’s ambitions notwithstanding, the Indian EV market currently has one of the lowest penetration rates in the world. There are multiple layers to this.

The first has to do with policy volatility. E-mobility is a nascent industry in India and most of the developing countries. Capital costs are high and the payoff is uncertain.

The unrealistic quasi-policy statement that all new vehicles should be e-vehicles by 2030 is a prime example.

Thankfully, that has been toned down to 15% of all vehicle sales in the next five years.

And inconsistencies remain. For instance, while electric vehicles are taxed at 12% under the goods and services tax (GST), batteries were taxed at 28% until recently. This has now been lowered to 18% but the discrepancy still exists.

Second, this lack of policy certainty spills over into perhaps the single most important element of enabling e-vehicle usage: charging infrastructure.

If a switch to e-vehicles is to have any significant effect on pollution, the sector cannot be seen in isolation.

An EV, is only as clean as the electricity source it uses. In India, thermal sources account for about 65% of capacity.

Third, localization is another tricky area, as the strife caused by the rupee’s depreciation has shown.

India does not have any known reserves of lithium and cobalt, which makes it entirely dependent on imports of lithium-ion batteries from Japan and China.

It is necessary to acquire mines in Latin America and Australia. But that will not be enough. Private investment in battery manufacturing plants and developing low cost production technology is a must.

Stabilizing the policy environment when it comes to taxes, non-fiscal incentives and the infrastructure needed to tackle.

Government push for Electric Vehicles in past:

“Faster Adoption and Manufacturing of Electric and Hybrid Vehciles in India”, popularly known as FAME India scheme for improving and increasing electric mobility in India.

Effort is to significant boost to electric mobility with the aim to roll out a number of electric buses, electric three-wheelers and electric shared cabs for multi-modal public transport.

It is envisaged that early market creation through demand incentive, in-house technology development and domestic production will help industry reach a self-sufficient economy of scale in the long run by around the year 2020.

towards clean energy while still being technology-agnostic.

Environment-friendly EVs will reduce air pollution and thus contribute to the fight against climate change.

As per NITI Aayog’s report EVs will help in cutting down as much as 1 Gigatonne (GT) of carbon emissions by 2030.

Both Central and State Governments should support clean energy research in general. That way, the government does its part in steering the policy ship

Targeting of direct sops and incentives for EV: From the supply side, such interventions include speed-tracking of environmental and labour clearances, tax rebates and exemptions.

Renewed commitment on the part of government: To provide and promote greater public infrastructure for EVs, including public charging stations, dedicated electric supply lines for such stations, and battery swap stations.

Boost for R&D innovation: In February 2016, a Technology Platform for Electric Mobility was initiated jointly by the departments of heavy industries, and science and technology.

These are clearly the most critical areas for research, and directing funding will be instrumental in meeting the NEMMP target of six million EVs/hybrids by 2020.

In addition, a robust system of incentives for private entities spearheading EV innovation, including tax credits for setting up research labs, is also crucial.