Insights into Editorial: In Parliament’s court 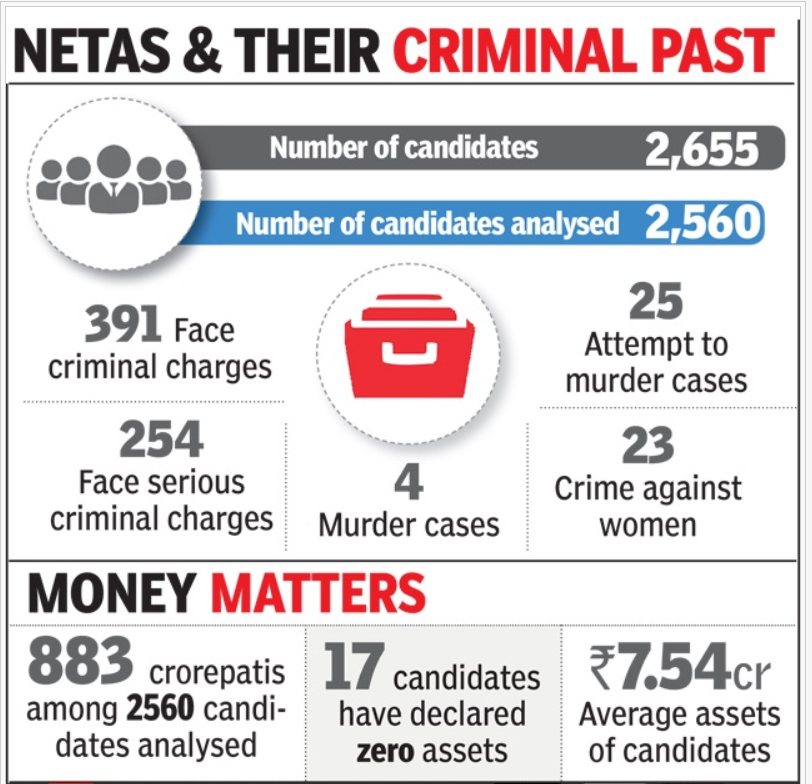 The Supreme Court has stuck to the letter of the law in putting the onus on Parliament to frame a law to prevent people with criminal charges against them from contesting elections and entering the house, even as it has made it clear that political parties need to do a lot more to clean up politics.

The court mentioned that it was not within its powers to disqualify politicians facing criminal cases from contesting election, but recommended that Parliament enact a strong law.

However, the court made it mandatory for political parties and candidates themselves to make public disclosure through print and electronic media.

Data from the Association for Democratic Reforms (ADR) indicate 179 out of the 543 elected MPs in the present Lok Sabha have some kind of criminal cases pending against them.

Going by ADR estimates, there are more than 1500 MPs and MLAs in parliament and State Assemblies with criminal cases pending against them.

Some of them of course, may be of frivolous in nature, but some of the cases involve allegations of their involvement in serious crimes.

In case of over 100 MPs, the cases were of a very serious nature, such as crimes against women and kidnapping.

In the previous Lok Sabha of 2009, 163 had criminal cases pending against them, many of them were of a serious nature.

The profile of the members of the Upper House is no better, 228 members of the Rajya Sabha for whom data was analysed, 20 have cases of serious crimes pending against them.

It has issued five broad guidelines related to better labelling and disclosure of such charges.

These are to make sure that a candidate for political office declares his or her criminal antecedents:

Making these details public will work in two ways.

One, of course, is to ensure that people aren’t voting for someone without knowing the facts.

The other is deterrence, because these charges will now be well-known, perhaps politicians will be more careful.

Political parties say that barring the candidates having been charged for heinous crimes is not practically feasible.

They say that this could lead to wrong cases being filed against the candidates. This may appear to be valid as data shows that there are 2.7 lakh under-trials, not convicted and hence innocent, but locked up in jails.

The contention is all the candidates and the legislators should be deemed innocent until proven guilty.

There is serious doubt whether the given judgment by Supreme Court would in any way help in making our politics cleaner than before.

The chances of Parliament acting fast on this issue are dim. The reasons are simple and obvious. No political party is free of this problem.

The issue is far more important and serious than the attention being paid to it by the policy makers.

While the Election Commission has limited powers to legislate on such laws, it is only Parliament which can legislate to bring about the desired change.

With the SC order, political parties will now find it difficult to make excuses for choosing tainted candidates.

To be sure, law enforcement and legal systems will have to become more effective and efficient to ensure that they weed out politically-motivated charges from actual criminal ones.

Thus, despite a functional democracy where voters deliberately vote for a ‘criminal politician’, who thrives because of fractured governance systems and absence of rule of law, only an electorate that categorically rejects the criminalisation of politics can ensure a thorough cleanse of the system.

This move will not clean up politics overnight, but it does add ammunition to the battle for probity in political office.