Topic– Part of static series under the heading – “Rainfall pattern”

1) Explain the distribution pattern of rainfall in India and factors affecting that distribution?(250 words)

The question expects us to bring out the distribution pattern of rainfall in India – the areas where rainfall is scanty and the areas where it is in abundance. We also need to explain the factors that are responsible for such variations in rainfall patterns.

Introduction – Mention that India falls in the monsoon climatic region. Rainfall is the backbone of Indian agriculture and economic activities and thus rainfall pattern is important 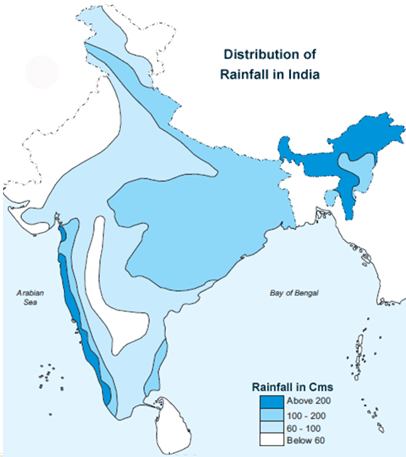 Distribution of rainfall in India:-

Factors responsible for distribution of Rainfall in India

The question is quite self explanatory its demand. First we need to explain what NI is, how computing NI is useful for economies and finally it expects us to bring out how the three main methods of computing NI. 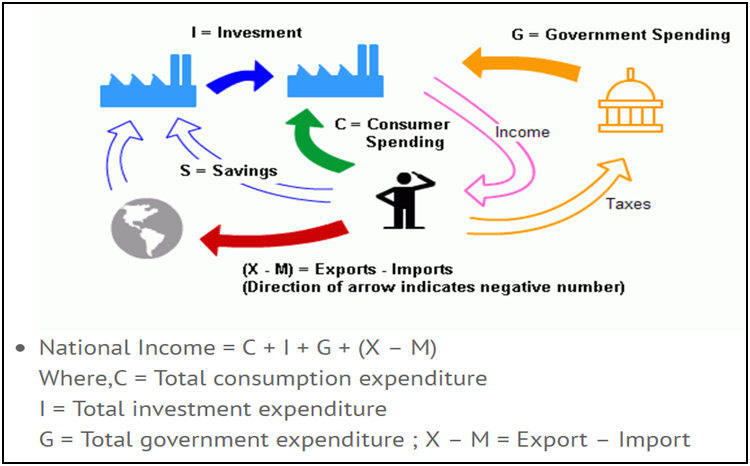 Why is national income calculated:-

3) Discuss the verdict of Supreme Court with respect to Aadhar and the implications of the verdict?(250 words)

Verdict of the constitutional bench of SC in Aadhar case is a landmark judgment and needs to be prepared in detail. The article gives details of the verdict as well as its implications which addresses the various debates surrounding Aadhar. This topic is going to remain in news in the near future and we have to keep an eye out for the various details and implications of the verdict.

The question expects us to bring out the details of the verdict and explain how the verdict addresses the various debates surrounding Aadhar. We also need to discuss what the implications of the verdict are with respect to the beneficiaries of government subsidies, mandatory production of Aadhar for the enjoyment of various services etc.

Introduction – Explain the background of the Aadhar case and emphasize on its significance.

Conclusion – Mention that the issue has been under debate for long and the verdict would go a long way in easing the issues surrounding Aadhar.

4) Discuss the verdict of SC in M Nagraj case 2006 and the clarification issued by SC wrt reservation in promotions?(250 words)

The issue of reservation in promotions for SC/ST in public sector jobs has been a source of debate since Indra Sawhney verdict. The clarifications issued by SC yesterday on the same issue gives some clarifications wrt Nagraj verdict. The details of the verdict along with the implications it has on the issue of reservation in promotions need to be prepared in detail.

Introduction – Give a brief background of the issue and details about the current case.

Conclusion – Give your view on this issue and discuss the way forward.

Clarification given by SC regarding reservation in promotions:-

5) Construction and demolition waste is a major environmental and health hazard. Examine and suggest sustainable solutions for dealing with C&D waste?(250 words)

The article gives an in depth view of the status of the problem of C&D waste, the implications of the unchecked rise of such waste and ways to deal with C&D waste. C&D waste is a major contributor to environmental pollution particularly in major cities like Delhi etc. Understanding the problem, and analyzing ways to deal with the problem is important for mains.

The question expects us to highlight the magnitude of problem, the reasons why such waste is a major cause of environmental and health hazards, the reasons why the problem is difficult to manage and the sustainable solutions that can help manage this challenge.

Introduction – Explain what C&D waste is

Conclusion – emphasize on the problems caused due to lack of attention over this issue and suggest way forward.

Why Construction and demolition waste are threatening environment:-

6) Gene editing has opened up new vistas of opportunity, and at the same time poses immense ethical challenges. Discuss(250 words)

The article highlights the immense opportunities opened up as a result of advancements made in the field of gene editing, and also brings out the ethical challenges that it poses. Various governments have now given a go ahead for such projects, and several advancements have taken place in countries such as China. Understanding how CRISPR CAS9 helps, and the ethical challenges posed by gene editing would be useful for mains.

The question expects us to bring out the advancements made in the field of gene editing, the applications arising out of CRISPR CAS9, and the various ethical challenges arising out of the technology.

Introduction – Mention that in researching how bacteria fights viral infections, a team of researchers led by Jennifer Doudna and Emmanuelle Charpentier made a revolutionary discovery of a method of intervening in the human genome with previously unimaginable precision and efficiency.

Conclusion – Give your view on the ethics of gene editing and discuss way forward.

Opportunities due to gene editing :-