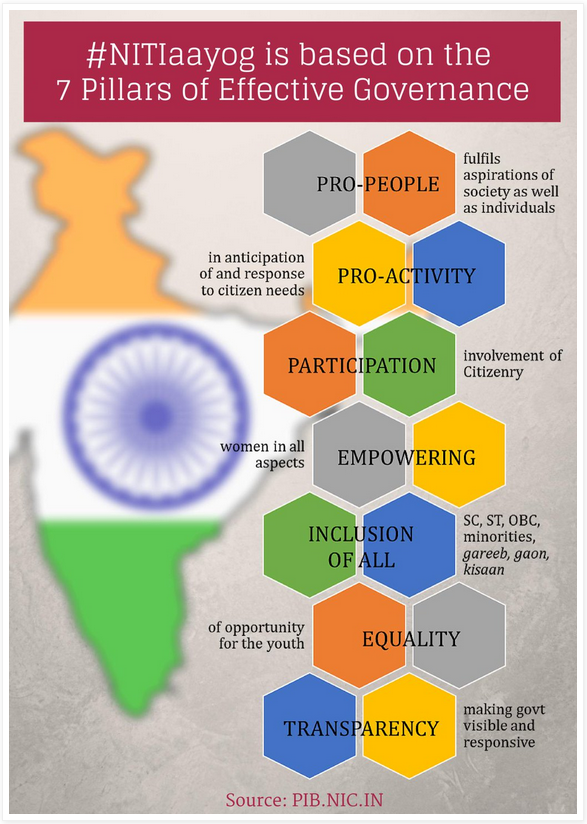 The Government had replaced Planning Commission with institution NITI Aayog (National Institution for Transforming India).  The reason had mentioned that Specific to the planning process, there is a need to separate as well as energize the distinct ‘process’ of governance from the ‘strategy’ of governance.

An important evolutionary change from the past will be replacing a centre-to-state one-way flow of policy by a genuine and continuing partnership with the states.

The institution must have the necessary resources, knowledge, skills and, ability to act with speed to provide the strategic policy vision for the government as well as deal with contingent issues.

NITI Aayog acted as an action tank rather than just a think tank. By collecting fresh ideas and sharing them with the Central and State governments, it pushes frontiers and ensures that there is no inertia, which is quite natural in any organisation or institution.

NITI Aayog also work to cut across the silos within the government.

For example, India still has the largest number of malnourished children in the world.

NITI Aayog is best placed to achieve this convergence and push the agenda forward in the form of POSHAAN ABHIYAAN.

NITI Aayog is also bringing about a greater level of accountability in the system.

NITI Aayog has established a Development Monitoring and Evaluation Office which collects data on the performance of various Ministries on a real-time basis. The data are then used at the highest policymaking levels to establish accountability and improve performance.

This performance- and outcome-based real-time monitoring and evaluation of government work can have a significant impact on improving the efficiency of governance.

Using such data, we also come up with performance-based rankings of States across various verticals to foster a spirit of competitive federalism.

NITI Aayog play an important role of being the States’ representative in Delhi, and facilitate direct interactions with the line ministries, which can address issues in a relatively shorter time.

The Atal Innovation Mission, which is also established under NITI Aayog, has already done commendable work in improving the innovation ecosystem in India.

It has established more than 1,500 Atal Tinkering Labs in schools across the country and this number is expected to go up to 5,000 by March 2019.

It has also set up 20 Atal Incubation Centres for encouraging young innovators and start-ups.

Arguments against for the NITI Aayog:

NITI Aayog is supposed to be a think tank. This implies that while generating new ideas, it maintains a respectable intellectual distance from the government of the day.

Some of Questions need to be answered:

(The above raised questions can be used in various critical evaluations that will enhance critical appraisal.)

Need of the hour is NITI Aayog will need to evolve into a much stronger organisation than it is now.

Planning for a developing economy can be abandoned, but only at its own peril. The implication for a complex country like India that became an industrial economy late is that planning would, and should, remain a central function of the state in the medium run.

However, we would contend that the Planning Commission, unfortunately, did not fulfil its function adequately. NITI Aayog will need to evolve into a much stronger organisation than it is.

Learning from the experience of the now-industrialised countries, the Chinese state ensured that its State Planning Commission became more powerful in the state apparatus.

China became the “factory of the world” — backed by an industrial policy driven by the National Development and Reforms Commission.

Similarly, in all East Asian and Southeast Asian countries, industrial policy was planned and executed as part of five-year or longer-term plans.

While East Asian and Southeast Asian countries still had, and have, five-year plans, what was also integral to their planning was productive use of labour, their most abundant factor, through an export-oriented manufacturing strategy.

It was this strategy that was lacking in India’s planning.

If NITI Aayog is to implement such a strategy within a planning framework in India, two major changes in governance structures are needed.

First, planning will have to become more decentralised, but within a five-year plan framework.

Second, bureaucracy will need to change from generalist to specialist, and its accountability will have to be based on outcomes achieved, not inputs or funds spent.

NITI Aayog should spell out how these reforms will be implemented.

If it succeeds, NITI Aayog could emerge as an agent of change over time and contribute to the government’s agenda of improving governance and implementing innovative measures for better delivery of public services.

With its unique and vibrant work culture, NITI Aayog remains an integral and relevant component of the government’s plans to put in place an efficient, transparent, innovative and accountable governance system in the country.