Insights into Editorial: The economics of RCEP and potential outcomes for India 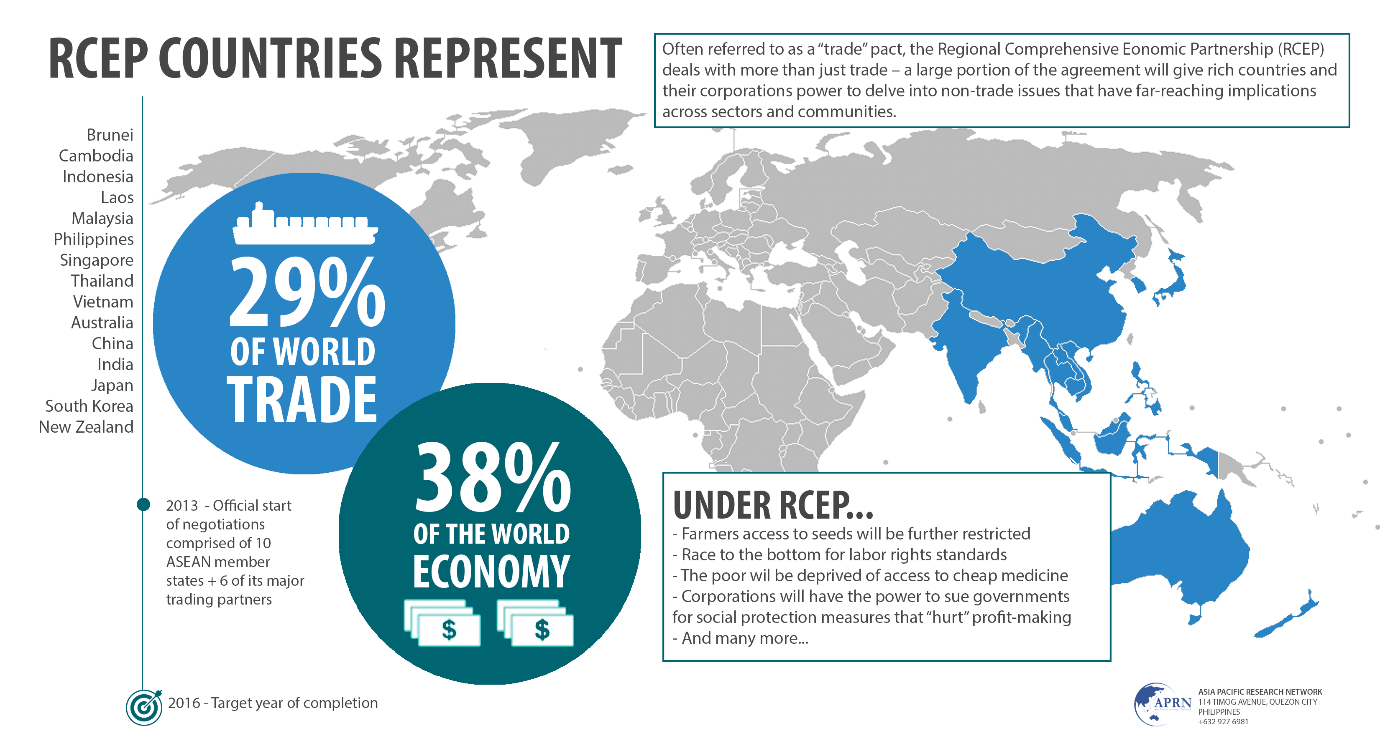 It is a proposed free trade agreement (FTA) between ASEAN and six Asia-Pacific states. RCEP is the world’s largest economic bloc, covering nearly half of the global economy.

RCEP is considered as an alternative to the other important multilateral treaties.

The Regional Comprehensive Economic Partnership (RCEP) agreement is under negotiation and has remained a much-contested subject in recent times.

It is imperative to view this agreement and its potential outcomes from an objective and balanced perspective.

India is holding comprehensive stakeholder consultations with industry as well as different ministries and departments on the pact as the grouping includes China, with which India has a huge trade deficit.

In 2017, prospective RCEP member states accounted for a population of 3.4 billion people with a total Gross Domestic Product (GDP, PPP) of $49.5 trillion

It is approximately 38-39 percent of the world’s GDP with the combined GDPs of China and Japan making up more than half that amount.

RCEP’s share of the global economy could account for half of the estimated $0.5 quadrillion global GDP (PPP) by 2050.

The grouping envisages regional economic integration, leading to the creation of the largest regional trading bloc in the world.

RCEP recognises the importance of being inclusive, especially to enable SMEs leverage on the agreement and cope with challenges arising from globalisation and trade liberalisation.

Importance of Signing and Ratifying of RCEP Agreement:

All these may or may not add up to trade deficit. It is worth highlighting that trade deficit needs to be viewed in the context of its affordability.

For Instance, just as an individual loan and usage of credit cards are deficits at the micro level, but can be very helpful if it can be afforded by the individual, the trade deficit needs to be approached at the macro level.

Finally, analysts suggests that there are enormous export gains that could accrue to India from RCEP under varying scenarios.

This assumes even greater importance since our focus has been on products with favourable terms of trade for India.

If India is out of the RCEP, it would make its exports price uncompetitive with other RCEP members’ exports in each RCEP market, and the ensuing export-losses contributing to foreign exchange shortages and the subsequent extent of depreciation of the rupee can only be left to imagination.

Some of the sectors that have been identified as potential sources of India’s export growth impulses under RCEP to the tune of approximately $200 billion,

There are more compelling trade and economic reasons for RCEP to become India-led in future, than otherwise.

India would get greater market access in other countries not only in terms of goods, but in services and investments also.

India must play its due role to get its due place in the regional economic configurations.