Insights into Editorial: Dial a service 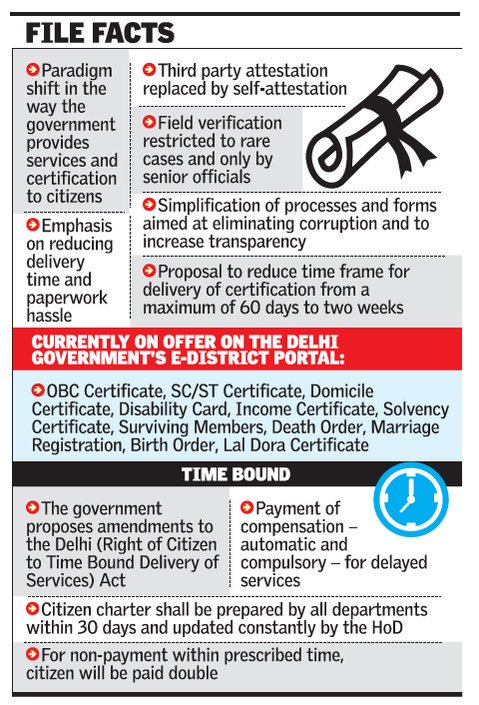 After undergoing a series of rejections and reconsiderations, Delhi Government’s programme for ‘doorstep delivery’ of public services has finally been approved by the Lieutenant governor Anil Baijal who announced the decision.

Delhites can get government documents delivered to their doorsteps by dialling 1076.  The government will roll out a scheme for delivering important documents like driving licences, caste certificates, new water connections to the citizens’ doorsteps.

After months of debates, deliberations and rejections, the Arvind Kejriwal-led Delhi Government has launched its doorstep delivery scheme which aims to deliver 40 public services to people’s doorsteps in its first step.

What is the home delivery of services scheme?

With the help of the service, citizens, by paying a nominal fee of Rs 50, will be able to issue and retrieve important documents right from the comfort of their homes. Skipping long queues, and the unnecessary hassle, citizens can now dial 1076 to avail the services.

After a request is placed, Mobile Sahayaks (Mobile helpers) will reach the applicant’s doorstep to get the necessary details and documents which are needed.

The mobile sahayak will be equipped with all the necessary equipment for the process including biometric devices, camera and printer. Once the process is completed, the documents will be mailed to the citizen’s house.

Hence, citizens will no longer have to rush to cyber cafes or stand in long queues just to get their documents uploaded and recorded.

Will it also check corruption?

According to many reports, Delhi government’s transport department is the most corrupt in terms of middlemen and unrequited commission agents.

Also, people suffer wandering from one desk to another repeatedly but all in vain.

However, the scheme will put an end to the inception of corruption and people wouldn’t have to waste their time and energy to make sure their work is done.

The government stated if the all goes well, the scheme will be expanded to the provision of ration which will be delivered at their doorstep curbing corruption considerably.

The introduction of Right to Services Act in India has given a powerful weapon in the hands of citizens of India.

In consideration for growing incidents, complaints and to introduce a statutory mechanism that could control such activities, the Right to Public Services Legislation was enacted.

What is Right to Public Service Act?

The Right to Service Act contains statutory laws and provisions to ensure time-bound delivery of public services to citizens of India.

It also defines the statutory mechanism to punish delinquent public officers if they fail to deliver the requested service within a stipulated time.

It is a state legislation and states have complete discretion to adopt, implement and limit the Act in whatever manner they deem fit.

Currently, there are almost 20 states that implement this Act and represent the duty of their state towards their citizens by providing them standard, quality, transparency and timely delivery of public services, in addition to an enforceable Grievance Redressal Mechanism.

Madhya Pradesh was the first state to enact the Right to Service Act on 18th August 2010 and Bihar became the second to implement it on 25th July 2011.

Recently, the Manipur government announced a single-window services centre in Imphal, to be operational from November, that will also include door-to-door delivery of government services

Several other states enacted similar laws to ensure delivery of services to residents.

Most states, however, have failed to fully capitalise on the RSA’s potential, meeting with moderate to poor success rates.

The Right to Service Act is considered to be one of the most effective ways to reduce corruption in India, enhance transparency in public sector operations and provide public accountability.

The movement to curb corruption has already commenced and the focus of this Act is to adopt effective measures for Redressal of public grievances against errant public officers.

In a country where policy-making has largely addressed itself to and focussed upon the rural electorate, the Delhi government’s endeavour indicates a recognition of the changing dynamics of new India, where urban migration is fast reworking the rules of engagement between the metropolitan and the rural.

The penalty is one reform, but it is time to take some additional reforms that can help in ensuring that officers implement this policy.

Some of the states like Bihar and to some extent MP have already implemented a package of reforms to ensure service delivery in government departments.

The expectations of citizens from Government Departments were falling down but an introduction of Acts like Right to Information, Right to Service Acts, Lokpal Bills etc. have kindled their light of beliefs on governance.