Insights into Editorial: The nature of dissent 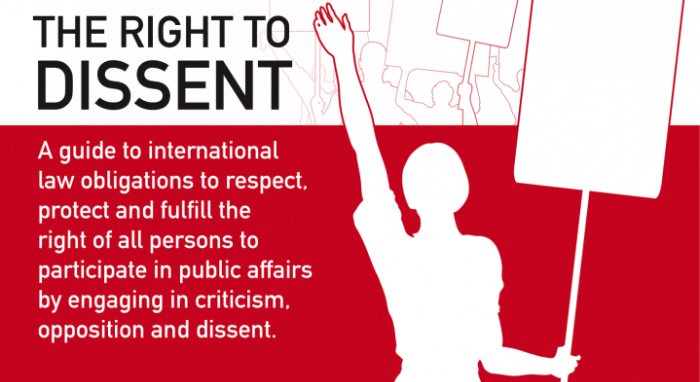 The Right to Dissent is an important addition of expressing one’s view, and on many of its most important constituent elements.

It will enable practitioners and citizens to claim their rights and participate more effectively in the project of democracy.

Disagreeing with each other is a fundamental human trait. There is not a single individual who does not disagree with something or the other all the time.

The quick arrest of academicians, human rights activists’ journalists and thinkers by the Maharashtra police in connection with the Bhima-Koregaon violence has brought out an interesting remark from the Supreme Court of India.

The apex court said, Dissent is a safety valve for democracy. If this safety valve is not allowed to function then the pressure cooker will burst.

Dissent means “a strong difference of opinion on a particular subject, especially about an official suggestion or plan or a popular belief”.

India’s constitutional democracy is predicated on the people’s right to call state power to account.

Even at Household level also, there is no family without dissent between parents and the children, or between the siblings. A family which learns to deal with dissent rather than authoritatively dismissing it is a more harmonious family.

Dissent is the safety valve of democracy: Supreme Court:

Recently, while hearing a petition on the ban of protest on the Jantar Mantar in New Delhi, the SC held that Right to peaceful protest is the fundamental right guaranteed under the constitution.

This particular right is also subject to reasonable restrictions in the interest of sovereignty and integrity of India, as well as public order.

A distinguishing feature of any democracy is the space offered for legitimate dissent, which cannot be trampled by any executive action.

Thus, the Court recognises that legitimate dissent is a distinguishable feature of any democracy.

Also observed that, every individual or a group of individuals, whether they are minority or poor or marginalised, have the right to express their dissent to the government policies and fight their social circumstances.

Protest strengthen representative democracy by enabling direct participation in public affairs where individuals and groups are able to.

Dissent involves the exercise of individual and collective rights of expression, association, assembly, and participation in public affairs.

These freedoms encompass rights to receive and impart information, inspire debate, and influence decision-making about issues of public concern.

Article 7 of the Declaration on Human Rights Defenders explicitly recognises that ‘Everyone has the right, individually and in association with others, to develop and discuss new human rights ideas and principles and to advocate their acceptance’.

Despite legal duties imposed on States to respect, protect and fulfil the rights to dissent and protest, these rights are routinely misunderstood and increasingly violated, with dissenters facing dire consequences including arrest, imprisonment, displacement, disappearance, and death.

The importance of dissent is not just that it is good for democracy. There is also a fundamental ethical principle involved in dissent

Any society which muzzles dissent is acting unethically.

Buddha and Mahavira were dissenters first and philosophers next. Ramayana and Mahabharata are filled with stories of dissent.

Dissent is not just about criticism, it is also about showing new perspectives.

Indeed, dissent is the quintessential part of democracy and allows people to have their opinions and to voice those without fear of intimidation.

‘Freedom of expression, freedom of association and the right to peaceful assembly are often compartmentalised and discussed individually, with little regard to their interdependence.

This unique guide of Protests provides activists, human rights defenders, jurists, NGOs, corporate actors, and government authorities with the tools and knowledge necessary to ensure rights, protect the lives and liberty of dissenters, enable meaningful participation in public life, and promote the rule of law.

The philosophy of dissent and democracy has also inspired our freedom movement and defines India’s constitutional democracy, which is predicated on the people’s right to call state power to account, albeit within the constitutional framework.

Thus, when we hear the voices of dissent from the oppressed and the marginalised, it is ethically incumbent upon those who are better off than them to give them greater space and greater freedom to dissent.