Insights into Editorial: Still too many children out of school 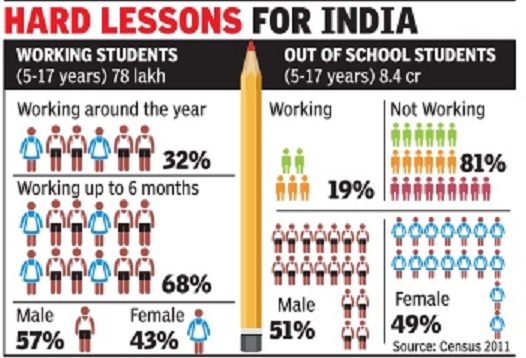 The Preamble to the Indian Constitution states that the democratic Republic of India shall secure social, economic and political justice.

Education is undoubtedly the most important element in the movement to secure this end.

Although the Directive Principles of State Policy mandate the state to provide children the right to access education, and the 86th constitutional amendment and the RTE dictate its implementation, it will only be fulfilled if sincere efforts are made by the States under the guidance and prodding of a committed Centre.

Official Data: How Far it to be reliable?

The official numbers of out-of-school children in India are either out of date or contradictory.

This is a gross underestimation. It is quite unlikely that the number of out-of-school children came down so drastically from 2011 to 2014, especially given that there were no significant changes in objective conditions, warranting such a miraculous reduction.

On the basis of the 71st round of the National Sample Survey (NSS) carried out in 2014 and taking into account the 6-18 age group, out-of-school children in this age group were more than 4.5 crores in the country

Frequent and Common Reasons for dropping out of school:

What can be done to bring more children to school?

If these provisions had been implemented, a major reason for drop-out (the distance of school) would have been eliminated.

It is the most critical requirement. But it has got the least public attention.
All other forward-looking provisions of the Act such as continuous assessment, a child learning at her own pace, and ‘no detention’ policy is contingent on a school with an adequate number of teachers.

No meaningful teaching-learning is possible unless trained teachers are physically present at school.
It is impractical to expect quality education without this.

Need of the Hour: All round development and learning of every Indian child:

Students should get time for various other activities that enable their all-round development and make them better human beings. At the stage of development of cognitive skills, students need to be given full freedom.

The RTE aimed to provide a framework for private schools to supplement the efforts of the state to uplift disadvantaged sections of society through the means of education.

We need to act immediately to address the gaps in the implementation of the law. The future of our children depends on it.

The most important social reason for drop-out is lack of awareness of the importance of school education and of the fact that education is now a legal right.

Ironically, education is the most important instrument for creating this awareness. Thus, education is a quintessential example of being vested with intrinsic as well as instrumental value being both the means and the end.