Context: Union Ministry of Women and Child Development recently inaugurated widows’ home ‘Krishna Kutir’ at Vrindavan in Mathura, Uttar Pradesh. The construction of the home was funded by Central Government and it will be managed by the Uttar Pradesh Government.

Krishna Kutir is a special home for 1000 widows set under Swadhar Greh scheme and is the largest ever facility of its kind created by government organization. It was constructed to mitigate the plight of widows living in pathetic condition in Vrindavan.

The State Governments/UT Administration invite applications from eligible organizations and the proposals which fulfil the norms are placed before a Project Sanctioning Committee (PSC) chaired by Secretary(WCD) of the State/UT concerned.

As per guidelines of the Swadhar Greh Scheme, to seek financial assistance the agency should meet following requirements: 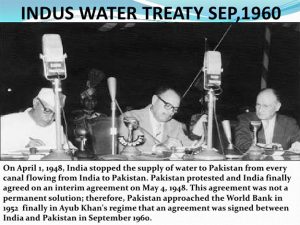 Context: India and Pakistan have agreed to undertake the Indus Waters Treaty mandated tours by their Commissioners in the Indus basin on both sides to resolve issues on the various hydroelectric projects, including the Pakal Dul and Lower Kalnai in Jammu and Kashmir.

The recently concluded deliberations were held to further strengthen the role of the Permanent Indus Commission (PIC) for matters under the 1960 Treaty.

For Prelims and Mains: EAS- composition, objectives, significance for India and issues associated.

The East Asia Summit (EAS) is a forum held annually by leaders of, initially, 16 countries in the East Asian, Southeast Asian and South Asian regions. Membership expanded to 18 countries including the United States and Russia at the Sixth EAS in 2011.

EAS meetings are held after annual ASEAN leaders’ meetings. The first summit was held in Kuala Lumpur, Malaysia on 14 December 2005.

EAS is an initiative of ASEAN and is based on the premise of the centrality of ASEAN.

EAS has evolved as a forum for strategic dialogue and cooperation on political, security and economic issues of common regional concern and plays an important role in the regional architecture.

There are six priority areas of regional cooperation within the framework of the EAS. These are – Environment and Energy, Education, Finance, Global Health Issues and Pandemic Diseases, Natural Disaster Management, and ASEAN Connectivity. India endorses regional collaboration in all six priority areas.

The concept of an East Asia Grouping was first promoted in 1991 by the then Malaysian Prime Minister, Mahathir bin Mohamad. The final report of the East Asian Study Group in 2002, established by the ASEAN+3 countries (i.e. China, Japan and ROK), recommended EAS as an ASEAN led development limited to the ASEAN +3 countries.

However, the ASEAN Ministerial Meeting (AMM) held in Vientiane on July 26, 2005 welcomed the participation of ASEAN, China, Japan, Republic of Korea, Australia, India and New Zealand, in the first EAS. USA and the Russian Federation were formally included as members of the EAS at the 6th EAS held in Bali, Indonesia on 19 November 2011.

EAS, representing nearly 50% of the world’s population and over 20% of global trade, is a mega gathering and is a testimony to the rise of Asia and how rapidly the world’s politico-economic equations are shifting.

Following the 12th EAS in November 2017 in Manila, Philippines and following the adoption of the Manila Plan of Action, Maritime Cooperation has been identified as an important area of cooperation under the EAS.

For Prelims and Mains: ASEAN- composition, objectives, significance and criticisms.

The Association of Southeast Asian Nations (more commonly known as ASEAN) is a political and economic organization aimed primarily at promoting economic growth and regional stability among its members.

Why was it set up?

ASEAN was founded half a century ago in 1967 by the five South-East Asian nations of Indonesia, Malaysia, Philippines, Singapore and Thailand. This was during the polarized atmosphere of the Cold War, and the alliance aimed to promote stability in the region. Over time, the group expanded to include its current 10 members.

Regional cooperation was further extended with the creation of the ASEAN Plus Three forum in 1997, which included China, South Korea and Japan. And then the East Asia Summit, which began taking place in 2005 and has expanded to include India, Australia, New Zealand, Russia and the United States.

How important is the region economically?

For Prelims and Mains: PCR- features, need, significance and the recommendations made by Deosthalee committee.

The PCR will be an extensive database of credit information for India that is accessible to all stakeholders. The idea is to capture all relevant information in one large database on the borrower and, in particular, the borrower’s entire set of borrowing contracts and outcomes.

Generally, a PCR is managed by a public authority like the central bank or the banking supervisor, and reporting of loan details to the PCR by lenders and/or borrowers is mandated by law. The contractual terms and outcomes covered and the threshold above which the contracts are to be reported vary in different jurisdictions, but the idea is to capture all relevant information in one large database on the borrower, in particular, the borrower’s entire set of borrowing contracts and outcomes.

A central repository, which, for instance, captures and certifies the details of collaterals, can enable the writing of contracts that prevent over-pledging of collateral by a borrower. In absence of the repository, the lender may not trust its first right on the collateral and either charge a high cost on the loan or ask for more collateral than necessary to prevent being diluted by other lenders. This leads to, what in economics is termed as, pecuniary externality – in this case, a spillover of one loan contract onto outcomes and terms of other loan contracts.

Furthermore, absent a public credit registry, the ‘good’ borrowers are disadvantaged in not being able to distinguish themselves from the rest in opaque credit markets; they could potentially be subjected to a rent being extracted from their existing lenders who enjoy an information monopoly over them. The lenders may also end up picking up fresh clients who have a history of delinquency that is unknown to all lenders and this way face greater overall credit risk.

Context: The six Western Ghats States, including Kerala, have been restrained by the National Green Tribunal (NGT) from giving environmental clearance to activities that may adversely impact the eco-sensitive areas of the mountain ranges.

Important directions issued by the NGT:

The Western Ghats Ecological Expert Panel had earlier proposed “much larger areas for being included in the eco-sensitive zone” though the Kasturirangan-led High Level Working Group, also appointed by the MoEF to look into the WGEEP report, had reduced it. The Ministry had accepted the Kasthurirangan report and issued the draft notifications on ecologically sensitive zones.

Western Ghats region is under serious stress. The region is one of the richest biodiversity areas which needed to be conserved.

Why was the Gadgil Committee set up?

Environment Ministry set up the Western Ghats Ecology Expert Panel under Gadgil. The panel was asked to make an assessment of the ecology and biodiversity of the Western Ghats and suggest measures to conserve, protect and rejuvenate the entire range that stretches to over 1500 km along the coast, with its footprints in Gujarat, Maharashtra, Goa, Karnataka, Kerala, and Tamil Nadu.

What did the Gadgil Committee say?

Why was Kasturirangan committee to set up?

Kerala flood is a lesson worth of learning for India’s disaster management system. India, having more than 7500 km of coastline, should have a strong disaster early warning and management system. Cooperation between the states can create an expert and integrated national structure, to manage any kind of natural disaster. 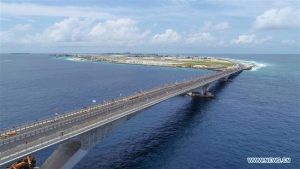 Context: China-Maldives Friendship Bridge has been officially opened for traffic.

Key facts: The bridge is an iconic project of the Maldives and China in co-building the 21st Century Maritime Silk Road. The 2-km bridge connects capital Male and neighboring Hulhule island where the Maldives’ main international airport is located.

Significance: The bridge has made it possible for locals and tourists to transit between the two islands on land within five minutes. The China-Maldives Friendship Bridge has the power to unlock Malé’s economy, and position China as a leading investor in Maldives’ transport and trade for years to come. 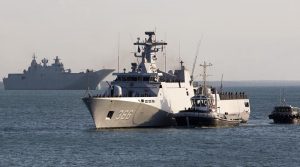 Context: Exercise Kakadu 2018 will be held in Australia. KAKADU 2018 is the 14th edition of the exercise.

Context: Two Indians Bharat Vatwani and Sonam Wangchuk are among six who have been declared winners of 2018 Ramon Magsaysay Award.

Context: India and Nepal have signed a memorandum of understanding (MoU) on preliminary engineering-cum-traffic survey of the proposed Raxaul-Kathmandu railway line.