NCRB is only a crime record agency. Therefore, a government notification has been issued under the Information Technology Act, 2000 to enable it to take action against such videos. Now, whenever such incidents are reported, it can write to service providers and ask them to block the content.

NCRB publishes 4 annual publications on Crime, Accidental Deaths & Suicides, Prison Statistics and Finger Prints. These publications serve as principal reference points on crime statistics not only police officers but also for criminologists, researchers, media and policy makers not only in India but abroad well. 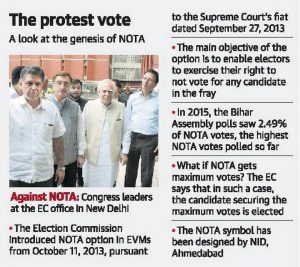 Context: The Supreme Court has overruled an Election Commission notification, saying that NOTA (None Of The Above) option cannot be allowed in Rajya Sabha elections.

Why SC scrapped the use of NOTA in Rajya Saba elections?

SC on the power of ECI:

The use of NOTA in elections:

How is a NOTA vote cast?

Why have NOTA if there’s ‘no electoral value’?

NOTA gives people dissatisfied with contesting candidates an opportunity to express their disapproval. This, in turn, increases the chances of more people turning up to cast their votes, even if they do not support any candidate, and decreases the count of bogus votes. Also, the Supreme Court has observed that negative voting could bring about “a systemic change in polls and political parties will be forced to project clean candidates”.

Why NOTA is good?

For Mains: Criminalization of politics- concerns, challenges and efforts to reform.

Context: The Supreme Court has proposed to make political parties accountable for criminalising politics by welcoming in “crooks” who may later win elections on party ticket and grab power. The court is hearing a batch of petitions to ban persons charged with heinous criminal charges from contesting elections.

Suggestion made by the court:

However, the centre has opposed this move suggesting the following reasons:

A political party has a right to field its candidate. Mere charges of having committed a crime cannot be used to prevent a person from contesting elections. The suggestion made by the court amounts to prematurely disqualifying a candidate. Besides, the court is taking on itself a matter of the legislature.

The court based its proposal on the following:

The Election Symbols (Reservation and Allotment) Order of 1968. Section 29A requires a party to swear to uphold the principles of socialism, secularism, democracy, sovereignty, unity and integrity of India.

Protecting the parliamentary system from criminalisation has been the intention of the law from the beginning.

Opposition to the proposal made by the Supreme Court:

Far from denying tickets to criminals, all political parties seem to have been in competition to give them more and more tickets. They have been unitedly opposing the proposal to debar perpetrators of even heinous offences during pendency of trial on the grounds that false criminal cases may be filed by opponents. This concern is partly valid.

Is this concern justified?

To counter the concern expressed, the proposal has three safeguards.

Context: A central government amendment passed by both Houses of Parliament in the just-concluded monsoon session, reinstating a controversial clause allowing immediate arrests in complaints filed under the SC/ST Act, has been challenged in the Supreme Court.

Arguments against the amendments by the petitioners:

On March 20, the Supreme Court issued a slew of guidelines to protect people against arbitrary arrests under the Act, directing that public servants could be arrested only with the written permission of their appointing authority, while in the case of private employees, the Senior Superintendent of Police concerned should allow it.

The Amendment Bill seeks to insert three new clauses after Section 18 of the original Act: 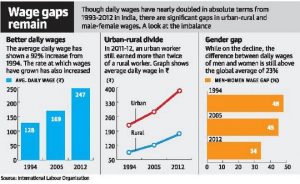 Overall, in 2009-10, a third of all of wage workers were paid less than the national minimum wage, which is merely indicative and not legally binding. That includes 41% of all casual workers and 15% of salaried workers.

In 2011-12, the average wage in India was about ₹247 rupees a day, almost double the 1993-94 figure of ₹128. However, average labour productivity (as measured by GDP per worker) increased more rapidly than real average wages. Thus, India’s labour share — or the proportion of national income which goes into labour compensation, as opposed to capital or landowners — has declined.

The rise in average wages was more rapid in rural areas, and for casual workers. However, these groups started at such a low base that a yawning wage gap still remains. Thus, the average wage of casual workers — who make 62% of the earning population — was only ₹143 a day.

Daily wages in urban areas (₹384) also remain more than twice as high as those in rural areas (₹175). Regional disparities in average wages have actually increased over time, with wages rising more rapidly in high-wage States than in low-wage ones.

The gender wage gap decreased from 48% in 1993-94 to 34% in 2011-12, but still remains high by international standards. And of all worker groups, the average wages of casual rural female workers was the lowest, at just ₹104 a day.

As per the study the minimum wage system in India is quite complex. The minimum wages are set by state governments for employees in ‘selected, scheduled’ employment and this has led to 1709 different rates across the country. As the coverage is not complete these rates are applicable for an estimated of 66 % of wage workers.

A national minimum wage floor was introduced in the 1990s which has progressively increased to Rs 176 per day in 2017 but this wage floor is not legally binding, in spite of a recurrent discussion since the 1970s.

It also called for collection of statistical data on a timely and regular basis and recommended other complementary actions to comprehensively address how to achieve decent work and inclusive growth like fostering accumulation of skills to boost labour productivity and growth for sustainable enterprises, promoting equal pay for work of equal value, formalising the informal economy and strengthening social protection for workers.

Target: The scheme envisages to increase the international ticketing to 20 crore by 2027.

The scheme is to be made operational only for states, which demonstrate their commitment to implement and provide the requisite support for promoting operations under the scheme.

Identification of routes: According to the draft, state governments will identify the routes to be connected, and airline operators will assess demand on the identified routes and submit proposals for providing connectivity.

Permitted aircrafts: Operations under the scheme will be permitted through fixed-wing aircraft only with more than 70 seats.

The scheme has proposed to set up an International Air Connectivity Fund (IACF) — a dedicated fund for providing subsidy support under the scheme. It will be created through the contributions of state governments.

The Airport Authority of India will be the implementing agency of the scheme.