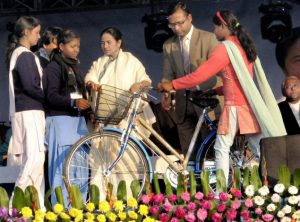 Context: West Bengal government has announced that there would not be any ceiling for a family’s annual earnings to be a beneficiary under the UN award winning Kanyashree scheme. Currently, girls who belong to families with annual family income not more than Rs 1.20 lakh is entitled to get the benefits.

The state government would also be coming up with a “Kanyashree University” for girls soon.

What is it? Kanyashree is a conditional cash transfer scheme aiming at improving the status and well being of the girl child by incentivising schooling of teenage girls and delaying their marriages until the age of 18. It received the United Nations Public Service Award last year.

Performance of the scheme: Through the initiative, cash was deposited into the bank account of girls for every year they remained in school and were unmarried. This initiative led to a “drastic reduction in child marriage, increase in female education and female empowerment.”

The UN Public Service Awards are given by the world body to institutions from across the world for their innovation and excellence in providing public services. 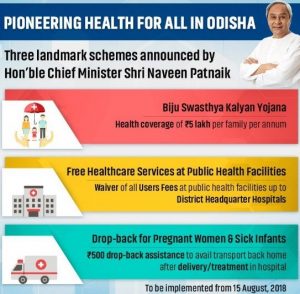 Context: Odisha government has launched Biju Swasthya Kalyan Yojana, a health for all scheme, on the occasion of the 72nd Independence Day.

Trust model: Odisha purposes to form a Trust to implement the scheme, which will reimburse the hospitalisation cost and will not pay premiums to insurance companies. Though the Trust model saves money, the major constraints are weak in-house capacity, poor governance structure and susceptibility to outside interference.

Governance structure: Another uphill task for the Trust is to improve the governance structure. Riddled with weak IT system and poor administration, the uptake of the ongoing health insurance programmes is far from satisfactory.

Procedural challenges: The Odisha State Treatment Fund has several procedural challenges, which, increases the predicament of patients. The same issues will have a major bearing on the BKSY implementation, unless the Trust carefully introduces measures to lessen these problems.

The financial implication of such a humongous scheme needs deliberation. The current resource absorption for RSBY, BKKY and OSTF is not hefty. The claims ratio for RSBY is 65-68 per cent. This is unlikely to rise significantly, unless architectural correction is made.

The most important question is: Can BSKY improve the persistent health financing problem?

Currently, Odisha spends around 4.5% GDP on healthcare, of which only 1.05% is by the government. Out of pocket (OOP) expenditure constitutes 76% of total health expenditure, which is unexpectedly high. On the contrary, the utilisation from the public healthcare facilities is quite high, the proportion being 72.55% for outpatient visits.

Furthermore, a significant proportion of OOP is due to outpatient care, mainly due to drugs and diagnostics services (58% and 12%, respectively). Dubbed as a step towards achieving Universal Health Coverage (UHC), BSKY may provide breathing space to millions of households burdened by costly health care.

However, a large part of OOP, which occurs due to outpatient visits (71%), will not be alleviated by any insurance mechanism, as it is meant only for hospitalisation.

For effective implementation of the scheme, the state needs to design the Trust structure by hiring experts to suggest packages, costs and criteria for empanelment of private hospitals.

Context: The Indian government has handed over a cheque amounting Rs 33 crore to the Nepal Government for construction of a Postal Highway.

The amount has been released towards 25% of the tendered cost (including 10% mobilization advance) of the two road packages of Birgunj-Thori Road being implemented under Postal Highway Project in Nepal with Government of India’s grant assistance.

About the Postal Highway project: 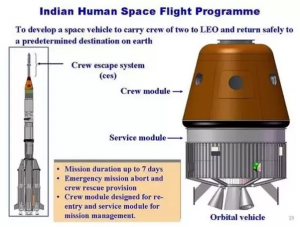 Context: In his address to the nation on India’s 72nd Independence Day, Prime Minister Narendra Modi announced that India will send an astronaut to space in the year 2022.

Three major areas that ISRO needs to master are, environmental control and life support (ECLS) system, crew escape system and flight suite and it’s currently working on them, under pre-project studies for which the Government sanctioned Rs 145 crore.

A manned space mission is very different from all other missions that ISRO has so far completed. In terms of complexity and ambition, even the missions to the Moon (Chandrayaan) and Mars (Mangalyaan) are nowhere in comparison.

For a manned mission, the key distinguishing capabilities that ISRO has had to develop include the ability to bring the spacecraft back to Earth after flight, and to build a spacecraft in which astronauts can live in Earth-like conditions in space.

If India does launch the Gaganyaan mission, it will be the the fourth nation to do so after the United States, Russia and China.

Context: The Food Safety and Standards Authority of India (FSSAI) has launched RUCO (Repurpose Used Cooking Oil), an initiative that will enable collection and conversion of used cooking oil to bio-diesel.

FSSAI believes India has the potential to recover 220 crore litres of used cooking oil for the production of biodiesel by 2022 through a co-ordinated action. While biodiesel produced from used cooking oil is currently very small, but a robust ecosystem for conversion and collection is rapidly growing in India and will soon reach a sizable scale.

The initiative has been launched nearly a month after the food safety regulator notified standards for used cooking oil. According to FSSAI regulations, the maximum permissible limits for Total Polar Compounds (TPC) have been set at 25%, beyond which the cooking oil is unsafe for consumption.

What is Total Polar Compounds (TPC)?

In many countries, TPC is used to measure the quality of oil. The level of TPC increases every time oil is re-heated. Some of the studies show that TPC accumulation in oil without food is slower than that in oil frying with food.

Higher level of TPC in cooking oil leads to health issues like hypertension, atherosclerosis, Alzheimer’s disease and liver disease. One of the studies also noticed high levels of glucose, creatinine and cholesterol with declined levels of protein and albumin in cooking oil.

Currently, used cooking oil is either not discarded or disposed of in such a manner that it chokes drains and sewerage systems. Apart from setting quality standards, the new regulation addresses the way this oil is discarded. As used cooking oil is considered the most reasonable feedstock for biodiesel production, the FSSAI is planning to redirect the used cooking oil from the food business operators. It has already started collecting used oil in small quantities either through a barter arrangement or at cost.

Context: The National Payments Corporation of India (NPCI) has said the recent incident of cyber attack in Pune-based Cosmos Cooperative Bank, that has caused an over ₹90-crore loss, is due to a malware attack on the bank’s system.

Hackers transferred over ₹90 crore out on August 11 and 13 through the malware attack on the bank’s server by cloning debit cards of the bank’s customers. The transactions were carried through automated teller machines (ATMs) in 28 countries, including Canada, Hong Kong and India. Visa and Rupay debit cards were cloned.

What’s the Difference Between Malware, Trojan, Virus, and Worm?

Malware is defined as a software designed to perform an unwanted illegal act via the computer network. It could be also defined as software with malicious intent. Malware can be classified based on how they get executed, how they spread, and/or what they do. Some of them are discussed below.

Unlike viruses, Trojan horses do not replicate themselves but they can be just as destructive. One of the most insidious types of Trojan horse is a program that claims to rid your computer of viruses but instead introduces viruses onto your computer.

The Maharshi Badrayan Vyas Samman distinction is conferred on persons once a year on the Independence Day in recognition of their substantial contribution in the field of Sanskrit, Persian, Arabic, Pali, Prakrit, Classical Oriya, Classical Kannada, Classical Telugu and Classical Malayalam.

The award introduced in the year 2002, is given to selected young scholars in the age group of 30 to 45 years. It carries a certificate of honour and a one time cash prize of Rs.1 lakh.

Context: 24th World Congress of Philosophy will be held in Beijing, China.

What is it? The World Congress of Philosophy is organized every five years by the International Federation of Philosophical Societies (FISP) in collaboration with one of its member societies. It was first organized in 1900.

Aims of the 2018 Congress include an emphasis on exploring dimensions of the human and inquiring into the challenges facing humanity: