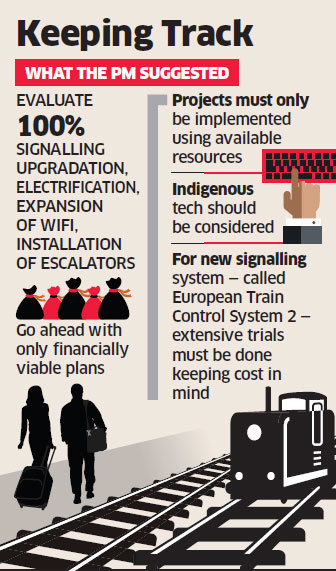 The Indian Railways (IR) is the fourth-largest railway network in the world – in terms of size, its total track length being 1,21,407 kilometer. It operates more than 13,000 passenger trains on a daily basis. It is currently the 8th-largest employer in the world, with more than 1.3 million employees but trains running late has been a common scenario across the country.

CAG observation on modernization of railways had brought the focus back on this key priority area of government as highlighted in the Budget.

It is the continual endeavour of Indian Railways (IR) to take measures for modernisation of railway passenger coaches, strengthening and upgradation of security infrastructure and stations and improvement of catering facilities.

The focus of Railways’ modernisation plans for its stations is mainly on improving the façade and passenger facilities, rather that removing bottlenecks to ensure timely movement of trains.

The latter should be one of the most important parameters to judge the quality of service being provided to the passengers, the Comptroller and Auditor General (CAG) has said in its report tabled in Parliament.

Important activities such as providing platforms with adequate length for easy boarding of long trains, providing adequate facilities for stabling trains and for their maintenance in stations, and adequate yard capacity significantly contribute to timely arrival and departure of trains, the CAG pointed out.

During a review of the existing infrastructure at 15 selected stations, the audit noticed that infrastructure such as platforms, washing pit lines and stabling lines at the stations were not augmented to match the increase in number of trains handled in all these stations.

Non-availability of adequate washing pit lines and stabling lines led to movement of empty trains to other depots for maintenance purposes. This caused blockage of lines.

Longer platforms can solve the problem:

Before taking up modernization/redevelopment of stations and constructing new buildings, the possibility of further expansion of the stations by adding more platforms needs to be considered.

The modernisation/ redevelopment of stations should also address infrastructural constraints and works such as construction of additional platforms, stabling and washing pit lines and remodelling of yards should be included in its scope, it recommended.

Of the 2,436 trains handled by the 15 stations as of March last year, 638 are being run with 24 or more coaches every day. To accommodate these longer train rakes, there should be platform of adequate length and adequate facilities of stabling and washing pit lines.

To improve the standard of food being provided to passengers, new Catering Policy has been issued on 27th February, 2017 wherein inter-alia Indian Railway Catering and Tourism Corporation Limited (IRCTC) has been mandated to carry out the unbundling by creating a distinction primarily between food preparation and food distribution.

What is the solution by CAG Report?

The comprehensive report by CAG gives a number of suggestions to the railway ministry.

The CAG report states that all Zonal Railways need to prepare comprehensive Master Plans for stations with heavy passenger traffic, identify constraints of station line capacity and devise measures to be taken to address these constraints on priority.

It is also desirable to increase the length of all the platforms at major stations so as to accommodate trains of 24 or more coaches.

It is also desirable that railways need to create additional platforms/ pit lines of adequate length where the number of platforms is not adequate for handling the trains originating/ terminating/ passing by the station.