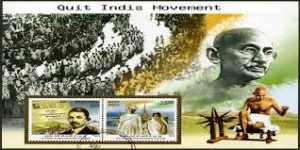 What is Quit India Movement?

It was in 1942 when the world was going through the havoc caused by World War II. India too was facing the heat and after the Cripps Mission had failed, and on 8 August 1942, Mahatma Gandhi made a Do or Die call through the Quit India movement. Large protests and demonstrations were held all over the country. However, as the movement didn’t get too much support from the outside, it was crushed and the British refused to grant immediate Independence, saying that it could happen only after the war had ended.

The Quit India movement was started by Mahatma Gandhi in 1942 but drew protests from the All-India Congress Committee demanding what Gandhi called was “An Orderly British Withdrawal” from India. This forced the British to act immediately and soon all the senior INC leaders were imprisoned without trial within hours of Gandhi’s speech.

Where was the Quit India Speech given?

On 14th July 1942, the Congress Working Committee at Wardha had passed a resolution demanding complete independence from the British government. On August 8, 1942, Mahatma Gandhi made a Do or Die call in his Quit India speech which was delivered in Bombay at the Gowalia Tank Maidan. Even though the speech caused some turmoil within the party and even leaders like Jawaharlal Nehru and Maulana Azad were apprehensive and critical of the call, but backed it and stuck with Gandhi’s leadership until the end.

For Prelims and Mains: Key features of ODOP and its significance.

Context: Uttar Pradesh government had recently organized ‘One District One Product’ Summit to promote traditional industries in every district of the state.

ODOP is basically a Japanese business development concept, which gained prominence in 1979. It is aimed at promoting a competitive and staple product from a specific area to push sales and improve the standard of living of the local population. Over time, it has been replicated in other Asian countries as well.

Context: World Biofuel Day is observed every year on 10th August to create awareness about the importance of non-fossil fuels as an alternative to conventional fossil fuels and to highlight the various efforts made by the Government in the biofuel sector.

Every year 10th August is observed as World Bio-Fuel Day in a bid to create awareness about non fossil-fuels (Green Fuels). On this day in 1893, Sir Rudolph Diesel (inventor of the diesel engine) for the first time successfully ran mechanical engine with Peanut Oil. His research experiment had predicted that vegetable oil is going to replace the fossil fuels in the next century to fuel different mechanical engines. Thus to mark this extraordinary achievement, World Biofuel Day is observed every year on 10th August.

Government initiatives to promote the use of Biofuels:

Since 2014, the Government of India has taken a number of initiatives to increase blending of biofuels. The major interventions include administrative price mechanism for ethanol, simplifying the procurement procedures of OMCs, amending the provisions of Industries (Development & Regulation) Act, 1951 and enabling lignocellulosic route for ethanol procurement.

These interventions of the Government of India have shown positive results. Ethanol blending in petrol has increased from 38 crore litres in the ethanol supply year 2013-14 to an estimated 141 crore litres in the ethanol supply year 2017-18.  Bio-diesel blending in the country started from 10th August, 2015 and in the year 2018-19, Oil Marketing Companies have allocated 7.6 crore litres of biodiesel.  Oil PSUs are also planning to set up 12 Second Generation (2G) Bio-refineries to augment ethanol supply and address environmental issues arising out of burning of agricultural biomass. 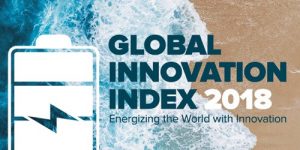 Context: NITI Aayog has proposed to join hands with Confederation of Indian Industry (CII) to develop a Roadmap for Top 10 Rank in Global Innovation Index (GII).

India’s rank on the Global Innovation Index (GII) has improved from 60 in 2017 to 57 in 2018. India has been consistently climbing the GII ranking for the past two years.

There is a need to:

For Mains: Need for energy storage and its significance.

In February 2018, an Expert Committee under the chairpersonship of Secretary, Ministry of New and Renewable Energy, with representatives from relevant Ministries, industry associations, research institutions and experts was constituted by the Ministry of New & Renewable Energy to propose draft for setting up National Energy Storage Mission (NESM) for India.

The Expert Committee referred has proposed a draft NESM with objective to strive for leadership in energy storage sector by creating an enabling policy and regulatory framework that encourages manufacturing, deployment, innovation and further cost reduction.

Significance and the need for energy storage:

Energy Storage is one of the most crucial & critical components of India’s energy infrastructure strategy and also for supporting India’s sustained thrust to renewables.

Renewable energy sources now make up almost one-fifth of India’s total installed power capacity. However, as power grids increase their share of solar and wind energy, the problem remains that the peak supply of renewable sources does not always meet peak demand. For instance, solar energy generation may be at its peak at noon, but unless stored, it will not be available when needed to light up homes at night. Moreover, renewable sources are inherently intermittent: there are days when the wind doesn’t blow or the sky is cloudy.

Context: Union Cabinet has given approval for raising of four additional battalions of National Disaster Response Force (NDRF) to strengthen the India’s disaster response set up.

The Disaster Management Act has made the statutory provisions for constitution of National Disaster Response Force (NDRF) for the purpose of specialized response to natural and man-made disasters.

Two national calamities in quick succession in the form of Orissa Super Cyclone (1999) and Gujarat Earthquake (2001) brought about the realization of the need of having a specialist response mechanism at National Level to effectively respond to disasters. This realization led to the enactment of the DM Act on 26 Dec 2005.

ROLE AND MANDATE OF NDRF:

Context: In order to introduce the concept of a single person/leader responsible for coordinating the entire team and facilitating all services during the complete journey of the train, instructions have been issued introducing the concept of Train Captain.

How it works? In trains like Rajdhani/ Shatabdi/ Duronto and other trains where a Train Superintendent (TS) is on end to end basis, TS shall be nominated as “Train Captain” and made responsible for all the facilities on train. In all other trains, where TS is not present, Zonal Railways are to nominate the senior most ticket checking staff as Train Captain.

Joint issue of postage stamp between India and South Africa: