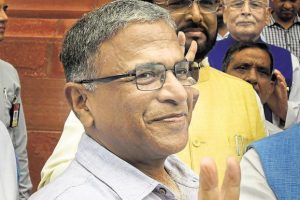 For Prelims and Mains: Election of Deputy Chairman of Rajya Sabha, constitutional provisions in this regard, role and significance of the Deputy Chairman.

Context: Harivansh Narayan Singh has been elected as the new deputy Chairman of Rajya Sabha.

The Deputy Chairman of Rajya Sabha:

Significance of the position:

The Deputy Chair is the one position that is elected solely by members of Rajya Sabha. It is a critical position not just because s/he steps in when there is a vacancy in the office of Chairperson/Vice President but also because s/he plays a critical role in ensuring the smooth running of the House. 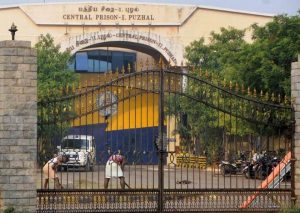 Context: The Supreme Court has proposed to constitute a committee under the chairmanship of its retired judge to look into the problems in jails.

The committee’s duties will include looking into the problems of jails across the country including overcrowding and women prisoners languishing in cells for years. After studying the problems, the committee would be required to suggest measures to deal with them.

The move is based on a petition in the court relating to inhuman conditions prevailing in 1,382 prisons across the country. The court had earlier taken strong exception to overcrowded jails across the country and said prisoners also have human rights and cannot be kept in jail like ‘animals’.

Indian jails have often been dubbed as a university for grooming criminals due to pathetic and inhumane conditions. In the absence of a robust Whistleblower Protection Act and structural changes to address the issues of overcrowding and understaffing, India’s prisons will continue to be heaven for politically connected criminals and hell for socio-economically disadvantaged undertrials, some regular media uproars notwithstanding.

Fundamental rights of prisoners cannot be placed in the back-burner and the Centre and the states need to be more pro-active in sensitising staff about the need to treat prisoners as humanely as possible.

Significance of the App:

Context: The Centre has constituted a Group of Ministers (GoM) headed by Union Minister of Commerce and Industry Suresh Prabhu to decide on 16-member Regional Comprehensive Economic Partnership (RCEP) negotiations.

What’s the issue with India?

There’s a Mounting pressure on New Delhi to give an early consent to the Regional Comprehensive Economic Partnership. India has, however, refused to take responsibility for the long-winding negotiations and has stressed that it is important to address the sensitivities and aspirations of all participants.

Why has it assumed so much significance in recent times?

Why is China so much interested in this deal?

China, using its influence as the global leader in goods exports, has been deploying quiet diplomacy to ensure consistent focus on attempts to obtain commitments on elimination of tariffs on most traded goods. China is keen on an agreement on a ‘high level’ of tariff liberalisation — eliminating duties on as much as 92% of traded products. This deal helps China fulfil its objectives.

China is also speeding up the RCEP negotiation process and striving for an early agreement, so as to contribute to realising the greater common goal of building the Free Trade Area of the Asia-Pacific (FTAAP). The FTAAP spans 21 Asia-Pacific Economic Cooperation countries, including the U.S. and China, but does not cover India. With the U.S. withdrawing from the Trans Pacific Partnership — a mega-regional FTA not involving India and China — that similarly aimed to help establish the FTAAP, the path is clear for China to push ahead with this strategic initiative to its advantage through the RCEP.

India’s FTA strategy has to be guided by the ‘Make In India’ initiative that aims to boost domestic manufacturing and job creation within India. In return for greater market access in goods, India, with its large pool of skilled workers and professionals, should try to use the RCEP to gain on the services side, by securing commitments from the other nations to mutually ease norms on movement of such people across borders for short-term work.

This decision was taken at the recently concluded 30th Session of International Coordinating Council (ICC) of Man and Biosphere (MAB) Programme of UNESCO held at Palembang, Indonesia.

A Biosphere Reserve is a unique and representative ecosystem of terrestrial and coastal areas which are internationally recognized, within the framework of UNESCO’s Man and Biosphere (MAB) programme. The biosphere reserve should fulfill the following three objectives:

In order to fulfill the above objectives, the Biosphere Reserves are classified into zones like the core area, buffer area. The system of functions is prescribed for each zone.

Context: The International Day of the World’s Indigenous Peoples is being observed across the world on August 9, 2018.

Aim: To strengthen international cooperation for solving problems faced by indigenous peoples in areas such as human rights, the environment, education, health and social development.

Significance of the day: The United Nations General Assembly on December 23, 1994 proclaimed 9 August as the International Day of the World’s Indigenous Peoples. The date marks the day of the first meeting of the UN Working Group on Indigenous Populations of the Sub-Commission on the Promotion and Protection of Human Rights in 1982.