Insights into Editorial: The problem at the WTO 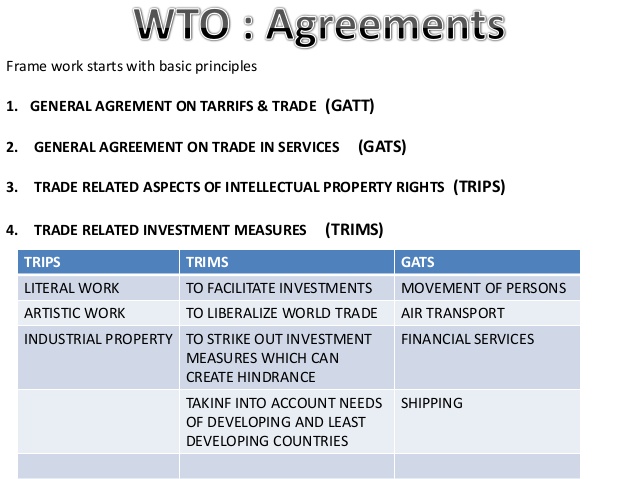 International Trade Organisation (ITO) was to be created to establish multilateral rules for the settlement of trade disputes and to resist protectionist demands and provide for greater legal certainty. The ITO never came into existence as it was eventually rejected by the U.S.

The General Agreement on Tariffs and Trade (GATT) came to replace the ITO. This ad hoc and provisional mechanism (GATT) was replaced by WTO in 1994.

The World Trade Organization (WTO) is an intergovernmental organization that regulates international trade.

The WTO officially commenced on 1 January 1995 under the Marrakesh Agreement, signed by 124 nations on 15 April 1994, replacing the General Agreement on Tariffs and Trade (GATT), which commenced in 1948.

It is the largest international economic organization in the world.

Context of the issue:

WTO is facing existential crisis during a time when developed economies have adopted protectionist attitude.

The U.S. has systematically blocked the appointment of new Appellate Body members (“judges”) and de facto impeded the work of the WTO appeal mechanism

With only four working members out of seven normally serving office in July 2018, the institution is under great stress

If no appointment is made, it will simply be destroyed by December 2019, with only one remaining member to tackle a massive number of disputes that are also increasingly hyper technical.

The U.S. drove the agenda to establish the World Trade Organisation (WTO) purely to pursue its own commercial interests.

The U.S. has been long proven isolationist and has never truly embraced the idea of a multilateral system in which its leadership could be contested.

So, the recent ire against its very creations, from the North American Free Trade Agreement (NAFTA) to the Trans-Pacific Partnership (TPP), and the less recent disenchantment with NATO or UNESCO, is not surprising.

The U.S. has systematically blocked the appointment of new Appellate Body members (“judges”) and de facto impeded the work of the WTO appeal mechanism. The U.S. is not willing to be judged by an independent multilateral quasi-judicial institution.

Who could be WTO’s saviour?

Beijing might well be the new WTO leader and China’s growing assertiveness may be the reason for the U.S.’s hard posturing. China is trying to establish herself by its assertiveness in rule-based WTO system.

In less than a decade since its first dispute, China has accumulated a vast experience close to that of the U.S. or Europe. This strategic and selective normative acculturation has been an empowering one — so much so that Beijing, together with a few others, the EU, and to some extent India, is now the main supporter of multilateralism.

China, EU, and to some extent India, and a few others, is now the main supporter of multilateralism.

The recent EU-China proposal to promote the reform of the WTO is said to combat “unilateralism and protectionism” but might well fail to address unfair trade issues raised against China itself.

The world has changed and multilateral institutions now have to embed these changes. This WTO crisis might well be the final battle to retain control over a Western-centric organisation.

The time has come for the emerging economies and the developing world to have a greater say in how to shape multilateralism and its institutions.

WTO needs to strengthen the dispute settlement mechanism as there are issues in appointment of judges in new appellate body.

WTO needs to enhance discussion mechanism by introducing wider consultations. It has been a long-standing complaint by the smaller participants that the consultations or decision making is limited to the green room of DG of WTO.

There is a need of free trade is required more by developing countries like India than developed countries.

There is need for the structural reform in the WTO functioning as multilateral trading system. Despite WTO being a democratic organization, there is a need to make it more effective in protecting the interests of small nations against stronger countries. The process of retaliation is ineffective and too impractical for smaller players.