Insights into Editorial: Reforming Indian agriculture by sprinkles and drips 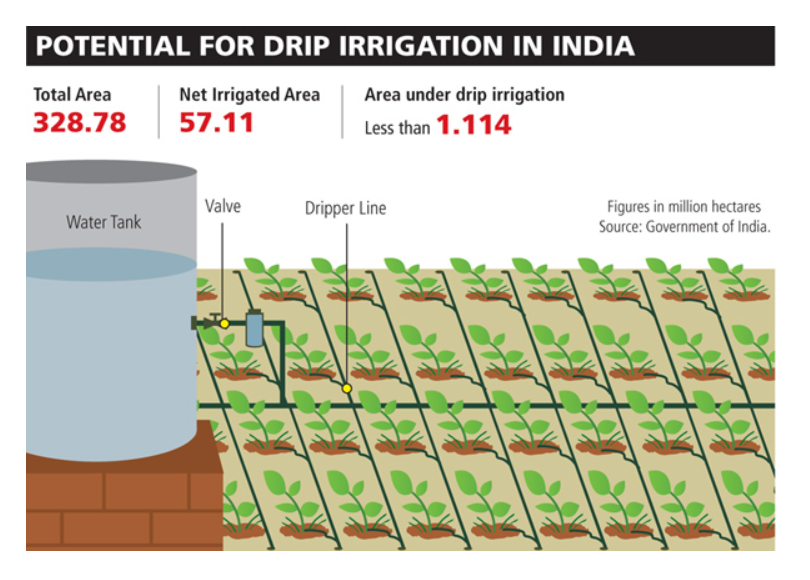 Agriculture is the most important sector of Indian Economy. Indian agriculture sector accounts for 18 per cent of India’s gross domestic product (GDP) and provides employment of around 50% of the countries workforce.

India is the world’s largest producer of pulses, rice, wheat, spices and spice products. India has many areas to choose for business such as dairy, meat, poultry, fisheries and food grains etc.

India has emerged as the second largest producer of fruits and vegetables in the world.

Depending on Monsoon for irrigation:

Each year in India, one half of a billion people pray for rain. The rain has to be just right.

Too little and there is drought. Too much and there are floods. In either of these cases, their agricultural crop does not provide them sufficient livelihood. Misery generally follows in its wake.

Seven decades after independence, Indian agriculture remains hostage to the whims of the rain gods during the monsoon season.

The principal reason for this is that 73 million hectares out of a net sown area of 141 million hectares are unirrigated and rainfall dependent. The spatial distribution of rain too has deep impact.

This year, for instance, rains have been plentiful in central and south India, normal in western India and deficient in the east and the North-East.

Even though food grain production will probably top a record 280 million tonnes this year (third year of record in a row), there will be large geographical pockets of output deficiency and household stress.

To add insult to injury, climate change is likely to add long-run volatility to agricultural yield.

The Economic Survey 2017-18 (Chapter 6) suggests that farmer income losses could range from 15% to 18% and could rise to between 20% and 25% in unirrigated areas. The survey asserts that in the absence of adaptation by farmers and changes in policy, there is likely to be an average loss of 12%.

The survey also points out that while real Indian agricultural output growth has grown from about 2% average in the first decades to over 3% now and the annual volatility (measured by standard deviation) has been reduced from 6% to about 3%, the growth is below China’s and the volatility of output is higher than China’s for the same period.

How Agricultural Reforms evolved in China:

After disastrous experimentation with the Great Leap Forward in the late 1950s by Chairman Mao Zedong, China’s serious agricultural reform began in 1978. Deng Xiaoping decollectivized agriculture and handed back control of farming to households (a certain portion of output was required to be sold back to the state).

In the first 20 years of reform, food grain output increased from 300 million to 500 million tonnes. At the same time, cereal centricity was replaced by a focus on meat, eggs, aquatic product and fruit. This shift in assortment was very successful with cereal production per capita increasing by 27% but aquatic and fruit production increasing 700% in the first two decades.

In some ways, China’s challenges are tougher than India’s, with only 15% of total land being arable in China (against about 40% in India) and vast areas being inhospitable to agriculture in the north, north-west and south-west of the country. China has also a shorter agricultural season than India (five months versus 10 months).

Despite the spectacular past success, the country has now become a net importer of food and Chinese agriculture faces challenges from water shortage and climate change. The focus of Chinese agriculture policy has shifted from quantity to quality and better water and fertilizer use.

India’s agricultural policy for the next decade should shift away from cereal (and quantity) centricity and be primarily focused on water effectiveness. For political reasons, Indian policy has not been able to evolve from “farmer welfare” to “agricultural household sustainability”.

The lack of long-term policy planning combined with a welfare-oriented policy results in a periodic loan-waiver approach which perpetuates a poor credit culture in the agriculture sector and, consequently, a fragile state balance sheet. This is a vicious circle of waiver addiction and debt, both at the rural household and state level.

Federal policy itself is trapped by the seventh schedule of the Constitution, which makes agriculture, dairy, meat and fisheries a state subject.

Most of the Indians are directly or indirectly depending on the agriculture. Some are directly attached with the farming and some other people are involved in doing business with these goods. India has the capacity to produce the food grains which can make vast difference in Indian Economy.

To achieve targeted mark by the government it needs to provide support in case of land, bank loans and other machineries to the small farmers along with the big farmers with this we can expect improvement in Indian economy.

In addition, the water effectiveness emphasis should insist on agricultural power being priced to the farmer. The only way to reduce gross misuse of ground water is to price the main input (electricity to pump that water out). Of course, other factors like seed quality, balanced fertilizer input (nitrogen, phosphate and potash), route to market and reduction in information asymmetry are important, but the principal problem has been a lack of focus.

A comprehensive reform process in agriculture would start with a constitutional amendment that makes agriculture and water (use) a concurrent subject in the Constitution—there has been precedent for this in the 42nd Amendment of 1976.

The purpose of this amendment would be to provide a federal fillip to states, with a primary emphasis on water effectiveness.

This water effectiveness project will not only focus on bringing more areas under irrigation in a sustainable manner (not with capital but with a thoughtful district by district approach) but also focus on sprinkler and drip irrigation.

A water effectiveness focus for agriculture policy will improve yield, change cropping patterns and reduce misery. It is the only way to mitigate the significant impact likely from climate change.

As emphasised in this year’s theme on World Water Day by the UN, we need to connect with nature to help rebalance the water cycle in a sustainable and cost-effective way by planting new forests, reconnecting rivers to floodplains and restoring wetlands. Governments, communities, the private sector, and researchers must collaborate.