Insights into Editorial: The warping of the logic of reservations 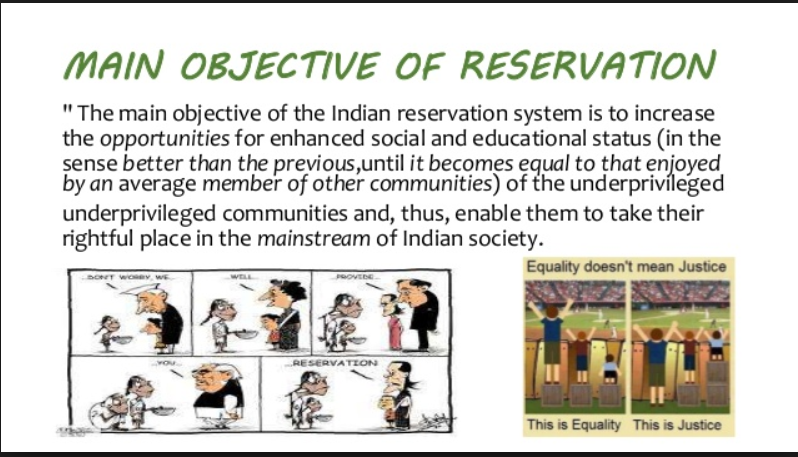 Reservation in India is the process of facilitating people in education, scholarship, jobs etc that were faced historical injustice.

Reservation is a form of quota-based affirmative action. Reservation is governed by constitutional laws, statutory laws, and local rules and regulations.

The system of reservation in India comprises a series of measures, such as reserving access to seats in the various legislatures, to government jobs, and to enrolment in higher educational institutions.

The reservation is undertaken to address the historic oppression, inequality and discrimination faced by those communities and to give these communities a place. It is intended to realise the promise of equality enshrined in the Constitution.

The primary objective of the reservation system in India is to enhance the social and educational status of underprivileged communities and thus improve their lives.

Present Context of the Issue:

The Maratha reservation demands, like those of the Patidars in Gujarat, the Kapus in Andhra Pradesh and the Jats in Haryana, are the inevitable outgrowths of the political warping of the logic of reservations.

This has been a contested issue since its inception. The Constituent Assembly fiercely debated the potential divisiveness of a policy of religion or caste-based reservation during a time of nation-building.

Mahavir Tyagi summed up a strain of thought that has persisted since when he argued that he did not “believe in the minorities on community basis, but minorities must exist on economic basis”.

Why Reservations have been promoted initially:

when it comes to certain groups that have been systematically oppressed for centuries, community identity and economic outcomes are difficult to disentangle. The Dalit experience has often been compared to the African-American experience. The comparison holds true here.

A solid body of study in the US has shown that centuries of slavery followed by decades of discrimination in housing, education, employment and law and order continue to affect African-American communities today in terms of capital formation, social capital and economic mobility.

Scheduled Castes and Scheduled Tribes face the same problem in India. In addition, economic opportunities, entrepreneurship, access to credit and the like are still mediated to a large extent through informal kin and caste networks today.

In India, there has been no significant convergence in the occupational mobility of SC/ST men and non-SC/ST men. In addition, SC/ST men are more vulnerable to moving down the intergenerational ladder. Given that no other caste group in India is so uniquely disadvantaged, it is difficult to argue against reservations for it.

Economic basis for the reservation not plausible:

Economic reservations, if they are to exist, must be only in instances of persistent, intergenerational poverty.

Various administrations have also failed to put in place policies and governance structures that will allow them to fulfil their basic functions: delivering public goods to citizens and enabling them to partake of economic growth.

Recently, Cabinet has approved the SC/ST (PoA) Amendment Bill 2018, which restores the original provisions to prevent atrocities against the SCs/STs.

In May 1949, Vallabhai Patel had said during the Constituent Assembly debates that rather than quotas on the basis of religion, he would wait for the blossoming of toleration and fair-mindedness for the growing conscience among my own countrymen, for there can be no future for this country except on the basis of true democracy and fair opportunity for all

A dedicated study has to be made analysing the relationship between the reservation, growth and development. Based on the study, the reservation policy has to be revamped. Reservation pleas without proper justification and rationale should not be accommodated.

The reservation nourishes the historically disadvantaged castes and tribes, listed as Scheduled Castes and Scheduled Tribes (SCs and STs) by the Government of India and also those designated as Other Backwards Classes (OBCs).

It would take political courage and effective governance of a high order to push back against quota politics. Even then, results would be slow in coming.

Reservation is no doubt, one of the appropriate positive discrimination tool for the benefit of downtrodden and backward section. But in India the policy of reservation has never been subject to a widespread social or political audit.

And the issue of reservation has remained a cause of disagreement between the various sections of the society. Hence before extending reservation to more groups, the entire policy needs to be properly examined, and its benefits over a span of nearly 60 years have to be gauged.