Insights into Editorial: A long-term strategy to reduce crude imports 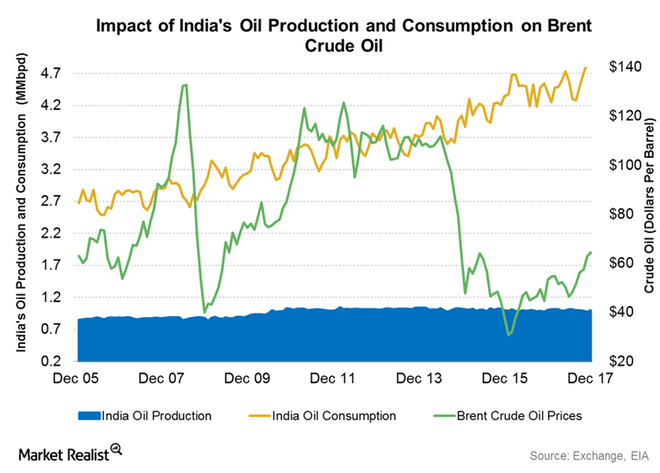 India’s energy consumption will grow 4.5 percent every year for the next 25 years. There is a need for a more transparent and flexible market for the oil and gas sectors.

India imports 80 percent of its oil needs and is the third largest oil consumer in the entire world.

Country’s refineries are on track to meet the ambitious target to produce clean and affordable fuel by April 2020.

The oil industry has been witnessing significant turmoil and uncertainty in recent months. The primary benchmark for international oil prices, the Brent crude, reached a level ($80.49 per barrel) in May that was not seen since 2014.

Histrionics around the US sanctions on Iran have also affected sentiments considerably. In recent weeks, tariffs imposed by the Donald Trump administration and the increasing production from Saudi Arabia and Libya have caused abatement of prices.

Rise in price of Brent Crude: Effects on India:

However, with the global economy in a better position now than in the last few years and the oil supply glut disappearing, crude price might not fall sharply over the near term, as it did before.

So, lowering the excise duty would exert pressure on fiscal balance. Alternatively, oil marketing companies (OMCs) may be asked to absorb losses but that would intrude on their capital expenditure plan.

What India needs now is a carefully devised strategy that is not driven by short-termism, but aims to gradually insulate the country from global oil price volatility.

Such a strategy should be centered on three things:

Expediting the migration to electric mobility:

So, what we now need to do is to get the pace of building electric vehicle (EV) supportive infrastructure to catch up with the addition of new electric buses to the public transportation system, mainly to facilitate a smooth take-off of EV bus services.

The best approach thus is a multi-stage adoption. This calls for first identifying a specific set of routes for electric bus services in a particular big city and ensuring that all infrastructure needed for their seamless operation is in place before considering other sets of routes.

Within the transport sector, trucks alone account for around 28% of the diesel consumption. Thus, creating dedicated electric corridors for trucks on the highways could go a long way in curbing oil imports.

Expanding the biofuel blending in petrol:

Hence, methanol, produced from coal, should be given more weightage when it comes to blending. Besides, biodiesel supply should be augmented by making jatropha farming more productive through genetic modification.

If all these fuels together reduce oil imports by 20%, the country could save up to $18 billion a year in terms of foreign exchange (assuming oil prices stay around their current level).

In the near- to medium-term, it is imperative to explore how fuels can eventually be covered under the goods and services tax (GST), which is essential not only to reduce any undue burden on users but also to prevent leakages and achieve efficiency.

To begin with, natural gas and aviation turbine fuels (ATFs) may be considered for inclusion, which might not cause substantial revenue loss for states but will foster confidence that other petroleum products will be brought under GST sooner rather than later.

The government has done well to not have resorted to administrative price controls, which would be at variance with the reform credibility that it earned through the implementation of structural reforms such as GST and the new insolvency and bankruptcy code.

Further affirmation from the highest levels of the government on continuation of fuel price deregulation would go a long way in bolstering investor sentiment, which is essential to boost private investment.

In brief, the right option now is to use the current situation as an opportunity to push for initiatives that are in the best interest of the country.

Reducing the country’s reliance on oil imports would bode well for energy security, and make our financial markets less volatile in the event of untoward developments in the oil market. And savings from reduced oil imports could in turn be used to finance infrastructure projects, which are crucial for India’s long-term growth prospects.