Cabinet clears Bill to restore the provisions of SC/ST Act

Context: The cabinet has given its nod to introduce a Bill to restore the original provisions of the Scheduled Castes and the Scheduled Tribes (Prevention of Atrocities) Act, 1989, which the Supreme Court had struck down in a March ruling.

The Amendment Bill seeks to insert three new clauses after Section 18 of the original Act:

On March 20, the Supreme Court issued a slew of guidelines to protect people against arbitrary arrests under the Act, directing that public servants could be arrested only with the written permission of their appointing authority, while in the case of private employees, the Senior Superintendent of Police concerned should allow it. A preliminary inquiry should be conducted before the FIR was registered to check if the case fell within the ambit of the Act, and whether it was frivolous or motivated, the court ruled.

The ruling was greeted by a storm of protest from Dalit groups, which said the order diluted the law. However, the court refused to stay its ruling, leading to the demand from Dalit groups that the government introduce an ordinance or an Amendment Bill to restore the provisions.

Context: Union Ministry of Culture has launched- ‘Seva Bhoj Yojna’– a scheme to reimburse central share of CGST and IGST on food, prasad, langar or bhandara offered by religious and charitable institutions.

The scheme seeks to reimburse the central government’s share of Central Goods and Services Tax (CGST) and Integrated Goods and Service Tax (IGST) on purchase of raw items such as ghee, edible oil, atta, maida, rava, flour, rice pulses, sugar and jaggery, which go into preparation of food/prasad/langar/bhandara offered free of cost by religious institutions.

The main objective of the scheme is to lessen the financial burden of such charitable religious institutions, which provide free of cost without any discrimination to the general public and devotees.

The charitable religious institutions including temples, gurudwara, mosque, church, dharmik ashram, dargah, monasteries, which fulfill the following criteria are eligible for the grant:

Prior to the introduction of CFS, Indian entities were not able to bid for large projects abroad since the cost of financing was very high for them and bidders from other countries such as China, Japan, Europe and US were able to provide credit at superior terms, i.e., lower interest rate and longer tenures which works to the advantage of bidders from those countries.

Also, by having projects of strategic interest to India executed by Indian entities, the CFS enables India to generate substantial backward linkage induced jobs, demand for material and machinery in India and also a lot of goodwill for India.

Reconsider the ban on oxytocin 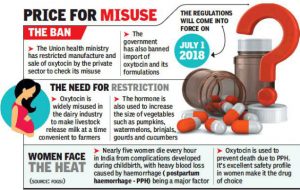 Context: The Union Health Ministry’s ban on the retail sale and private manufacture of oxytocin will kick off from September 1.

Why is it used?

The drug, a synthetic version of a human hormone, is a life-saver for women. Doctors use it to induce labour in pregnant women and to stem postpartum bleeding. So critical is its role in maternal health that the World Health Organization recommends it as the drug of choice in postpartum haemorrhage.

Why is it being banned?

The government’s ban ignores its critical uses, and is motivated instead by the misuse of the hormone in the dairy industry. Because oxytocin stimulates lactation in cattle, dairy farmers inject the drug indiscriminately to increase milk production. This has spawned several unlicensed facilities that manufacture the drug for veterinary use.

Policy Framework for exploration and exploitation of Unconventional Hydrocarbons

Context: The Union Cabinet has approved the policy to permit exploration and exploitation of unconventional hydrocarbons such as Shale oil/gas, Coal Bed Methane (CBM) etc.

It will be carried out under the existing Production Sharing Contracts (PSCs), CBM contracts and Nomination fields to encourage the existing Contractors in the licensed/leased area to unlock the potential of unconventional hydrocarbons in the existing acreages.

With the approval of this policy, there will be complete shift from ‘One hydrocarbon Resource Type’ to ‘Uniform Licensing Policy’ which is presently applicable in Hydrocarbon Exploration & Licensing Policy (HELP) and Discovered Small Field (DSF) Policy.

As per existing contractual regime of PSCs, existing Contractors are not allowed to explore and exploit CBM or other unconventional hydrocarbons in already allotted licensed/leased area. Similarly, CBM Contractors are not allowed to exploit any other hydrocarbon except CBM. Acreages held at present by various Contractors in PSCs and CBM blocks and National Oil Companies (NOCs) in nomination regime constitute a significant part of India’s sedimentary basin.

What is Coal Bed Methane?

Coal Bed Methane (CBM) is an unconventional form of natural gas found in coal deposits or coal seams. CMB is formed during the process of coalification, the transformation of plant material into coal. It is considered a valuable energy resource with reserves and production having grown nearly every year since 1989. Varied methods of recovery make CBM a stable source of energy.

What is Shale Gas?

Shale gas is a natural gas formed from being trapped within shale formations. It is unconventional source of methane, like coal-bed gas (in coal seams) and tight gas (trapped in rock formations). It is colourless, odourless gas, lighter than air. It is cheaper than natural gas, releases 50% less CO2, hence better source for generating electricity. It also provides feedstock for petrochemicals industry, which is turned into fertilizer, plastics and other useful stuff.

States are categorised based on their efforts and achievements towards energy efficiency implementation, as ‘Front Runner’, ‘Achiever’, ‘Contender’ and ‘Aspirant’.

Significance of the Index:

Such an index assumes significance in a country that is now the biggest emitter of greenhouse gases after the US and China, and which is among the countries most vulnerable to climate change. India plans to reduce its carbon footprint by 33-35% from its 2005 levels by 2030, as part of its commitments to the United Nations Framework Convention on Climate Change adopted by 195 countries in Paris in 2015.

Context: India has unveiled a tagline and a tricolour logo for geographical indication (GI) certified products. From now on, the GI-registered goods will sport the logo and the tagline to make them more attractive. 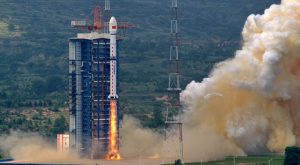 What is it? It is an optical remote sensing satellite, launched by China as part of its high-resolution Earth observation project. It will aid in the Belt and Road Initiative. It was the 282nd flight mission by a Long March carrier rocket.

Part of CHEOS: Gaofen-11 will become part of the China High-resolution Earth Observation System (CHEOS), initiated in 2010 to provide all-weather, all-day coverage by 2020 with optical and synthetic aperture radar satellites, and could also include airborne and near-space systems such as stratospheric balloons.