Insights into Editorial: How safe is CRISPR? 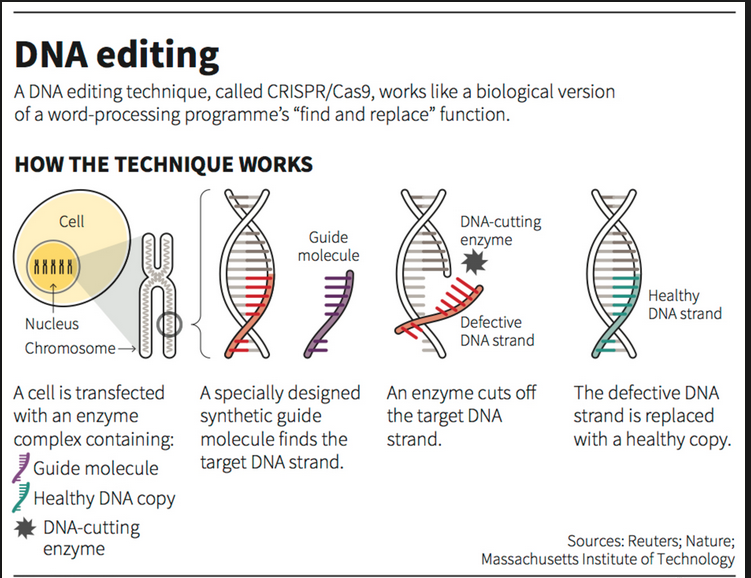 The technique has gained considerable traction recently to repair defective genes for potential therapeutic applications. Based on this promise, multiple clinical trials have been initiated in the U.S. and China (using the CRISPR-Cas9 system) to produce gene-edited cells for cancer and HIV-1 therapy.

However, is CRISPR ready for prime time and safe for clinical use?

What studies show about CRISPR-Cas9:

Last year, a study by Stanford University, U.S., found that the CRISPR-Cas9 system introduces unexpected off-target (outside of the intended editing sites) effects in mice.

Although the manuscript describing the study results has since been retracted (due to the lack of proper controls ascribing a causal role of the CRISPR-Cas9 system in introducing off-target effects), the fear that the CRISPR system is being prematurely rushed for clinical use lingers. Three recent reports have exacerbated this fear even further.

Two studies, one from the Karolinska Institute, Sweden, and the other from the biopharmaceutical company Novartis, have highlighted that CRISPR-Cas9-edited cells might trigger cancer. The results from both studies were published last month in the scientific journal, Nature Medicine .

What is the Point of Concern:

In the Karolinska study, the authors showed that the CRISPR-Cas9 system induced activation of a protein called P53.

Researchers in the study claim that a functional P53 protein swings into action in the target cell and repairs the edited site rendering the Cas9-mediated editing process ineffective. In cells where editing is adequate, the cell’s P53 protein may be dysfunctional.

Like in the earlier study, the Novartis study found that a high efficiency of the CRISPR-Cas9 system in human pluripotent stem cells (cells that can self-renew indefinitely in cell culture) is linked to the presence of a dysfunctional P53 protein.

A third study, published this month in the scientific journal,Nature Biotechnology, and from the Wellcome Sanger Institute, U.K., provided further evidence for the unintended consequences of the CRISPR-Cas9 system.

The study found that both the mouse and the human gene edited cells suffered from large DNA deletions far from the intended editing sites.

The scientists have argued that the commonly used techniques to screen for off-target effects may not be sufficient to identify the adverse-effects sites and comprehensive genomic analyses of the edited cells, using long-read DNA sequencing technology, may be required to pinpoint those.

What are the implications of such findings in India?

Although there are no clinical trials or studies to use CRISPR-Cas9 edited cells in the clinic currently undergoing in India, blood-related disorders such as haemophilia, sickle cell anaemia, and Beta-Thalassemia, and other disorders such as Duchenne Muscular Dystrophy are promising candidates for gene editing.

In fact, for many of these diseases, results from the proof-of-concept studies have been published from elsewhere.

There are many Indian researchers actively working in this area, and for them, the recent studies provide a cautionary tale to conduct a comprehensive genomic analysis before moving to use the CRISPR-Cas9 edited cells in the clinic.

The CRISPR technology is indeed a path-breaking technology, to alter genes in order to tackle a number of conventional and unconventional problems, especially in the health sector.

However, experiments and tests to validate its use must be subjected to appropriate scrutiny by the regulators, and their use must be controlled to prevent commercial misuse.

Way Forward in the Indian context:

It is envisaged that, India will emerge as a significant contributor to the world bioinformatics market and position itself as a global hub for bioinformatics.

With the improvements in the IPR regime, increasing support from the government and continuing efforts of the private sector companies, it is very much likely that India could repeat its IT success story in bioinformatics too.

Thus, much research on animal models and isolated human cells should be conducted before any full-scale routine application in humans.