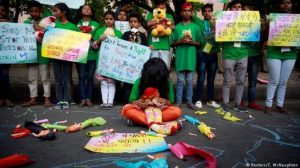 Context: The Lok Sabha has passed the Criminal Law (Amendment) Bill, 2018. The main highlight of the bill is that it seeks to amend the Indian Penal Code (IPC), the Evidence Act, the Code of Criminal Procedure (CrPC) and the Protection of Children from Sexual Offences (POCSO) Act to introduce a new provision to sentence convicts of such crimes punishment of death.

Need for a stringent law:

The number of reported cases of rapes of children increased in India by 82% in 2016 compared to 2015. A climate of violence, social and economic insecurity, alienation, and a progressive undermining of the status of women and children seem to have given an impetus to carry out crimes against women and children.

Therefore, the legal system must give a clear signal that we as a nation consider the rape of children below the age of 12 as among the most heinous of offences. Making such crimes punishable by capital punishment certainly gives such a signal.

Rajasthan and Madhya Pradesh have passed a Bill providing for death penalty to those convicted of raping girls of 12 years and below.

Context: The administrative control of Central Road and Infrastructure Fund (CRIF) has been transferred to the Department of Economic Affairs (DEA), Finance Ministry. So far, it was under the domain of Ministry of Road Transport and Highways.

Over the last one and a half decade, the Central Road Fund (CRF) was a major revenue for the government to finance ambitious road projects. The CRF launched in 2000 is basically a cess imposed along with excise duty on petrol and diesel.

The cess revenue was accrued to the CRF which was uniquely created and out of this major road projects were financed ever since its launch.

Conversion of CRF into Central Road and Infrastructure Fund (CRIF):

Main purpose of the amendment is to use the proceeds of the road cess under CRIF to finance other infrastructure projects including waterways, some portion of the railway infrastructure and even social infrastructure including education institutions, medical colleges etc.

The amendment prescribes that road cess is first credited to the Consolidated Fund of India and later, after adjusting for the cost of tax collection, should go to the CRIF.

As per the amendment, the share for each infrastructure areas and projects from the CRIF shall be finalised by a Committee, constituted by the Central government. The Committee will be headed by the Finance Minister. 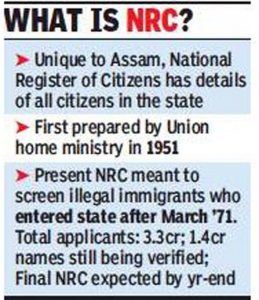 Context: The draft National Register of Citizens (NRC), published recently, includes only those able to prove they were in Assam before 1971. It excludes D- voters.

Short for ‘dubious’ or ‘doubtful, this is a category of voters disenfranchised by the government for alleged lack of proper citizenship documents. Some 2.48 lakh people got the D-voter tag during NRC process

Who is a declared foreigner?

D-voters are tried by special tribunals under the Foreigners’ Act and if they fail to defend their citizenship claim they are marked as declared foreigners and sent to any of six detention camps, which are within jails for criminals, for deportation. There were 91,206 declared foreigners as on December 31, 2017.

Why is NRC being updated in Assam?

Officially, the NRC process will address the issue of illegal migrants, specifically from Bangladesh. The National Register of Citizens was first published in 1951 to record citizens, their houses and holdings. Updating the NRC to root out foreigners was a demand during the Assam Agitation (1979-1985).

There have been several waves of migration to Assam from Bangladesh, but the biggest was in March 1971 when the Pakistan army crackdown forced many to flee to India. The Assam Accord of 1985 that ended the six-year anti-foreigners’ agitation decided upon the midnight of March 24, 1971 as the cut-off date.

Who is a citizen in Assam?

The Citizenship Act of 1955 was amended after the Assam Accord  for all Indian-origin people who came from Bangladesh before January 1, 1966 to be deemed as citizens. Those who came between January 1, 1966 and March 25, 1971 were eligible for citizenship after registering and living in the State for 10 years while those entering after March 25, 1971, were to be deported.

What happens to the excluded 40 lakh?

They will have to file for claims and objections and submit relevant documents for re-verification. The NRC office will issue claim forms from August 7 to 30, and these applicants would have to submit the forms from August 30 to September 28. The documents will be verified and accepted or rejected for the final NRC to be published on an unspecified date. The cases of those left out of the final NRC will be heard in the Foreigners’ Tribunals, after which applicants can approach the High Court.

Features of the Mission:

The focus of the mission will be on deep-sea mining, ocean climate change advisory services, underwater vehicles and underwater robotics related technologies.

Two key projects planned in the ‘Deep Ocean Mission’ report include a desalination plant powered by tidal energy and a submersible vehicle that can explore depths of at least 6,000 metres.

Significance of the Mission:

It is envisaged that 10% of recovery of that large reserve can meet the energy requirement of India for the next 100 years. It has been estimated that 380 million metric tonnes of polymetallic nodules are available at the bottom of the seas in the Central Indian Ocean.

Polymetallic nodules (also known as manganese nodules) are potato-shaped, largely porous nodules found in abundance carpeting the sea floor of world oceans in deep sea. Besides manganese and iron, they contain nickel, copper, cobalt, lead, molybdenum, cadmium, vanadium, titanium, of which nickel, cobalt and copper are considered to be of economic and strategic importance.

The concentrated efforts of independent activists, government policies, amendments to the Wild Life Protection Act, and rising awareness have helped push the number of the wild cats to 2,226 in 2014, when the last tiger census was held.

India has one of the lowest per capita forest areas in the world. Forests as carbon sinks are deemed to be a major mean of controlling climate change. Depletion of forests is responsible for reduction of tiger habitats.

Reduced food base: As forestlands fall to development projects, habitable land for animals that make for the tiger’s food base are also reduced.

Poaching: Another issue that has hindered tiger conservation in India and globally is poaching, which will persist as long as there is an illegal market for tiger body parts.

Climate change: Rising sea level as a result of climate change is on the verge of wiping out Sundarbans, one of the last remaining habitats of the Bengal tigers.

At the St. Petersburg Tiger Summit in 2010, leaders of 13 tiger range countries resolved to do more for the tiger and embarked on efforts to double its number in the wild, with a popular slogan ‘T X 2’.  The Global Tiger Initiative (GTI) program of the World Bank, using its presence and convening ability, brought global partners together to strengthen the tiger agenda.

Over the years, the initiative has institutionalised itself as a separate entity in the form of the Global Tiger Initiative Council (GTIC), with its two arms – the Global Tiger Forum and the Global Snow Leopard Ecosystem Protection Program.

The Project Tiger, launched way back in 1973, has grown to more than 50 reserves amounting to almost 2.2% of the country’s geographical area.

Additionally, improving patrolling and doing it specifically in areas vulnerable to poaching can bring the crime rate down.

There are several infrastructure projects that will cut through tiger corridors and habitats. The future of the big cat is uncertain if we continue to violate their habitat. Unless tigers have inviolate habitats where they can breed and flourish and there are corridors linking these breeding populations, we are isolating tigers in very small reserves which is fatal in the long run.

While the number is something to be proud of, experts believe issues such as poaching, receding forest areas and development projects infringing on tiger habitat need to be tackled.

India’s first Mobile Open Exchange zone to be at Noida:

Context: Country’s first Mobile Open Exchange (MOX) zone will be opened in Noida. UP government had signed MoU with World Trade Centre, Noida at UP Investors Summit to develop Tech Zone which will act as catalyst for growth of mobile and allied sectors in the state.