Insights into Editorial: The mob that hates 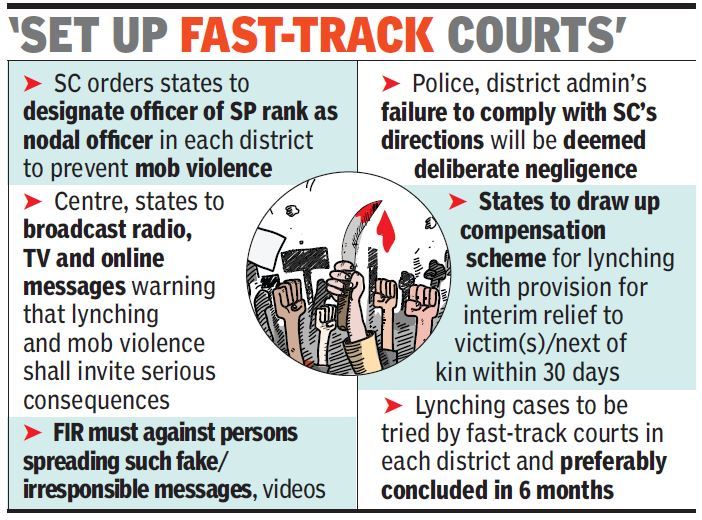 Recent Context of Lynching in India:

As the grim threat of lynching casts a terrifying shadow over large swathes of the country, directions from India’s Supreme Court to all governments to take steps to prevent what it described as “horrendous acts of mobocracy” can only be welcomed.

The court has asked Parliament to consider passing a special law on lynching. This, it maintains, is essential to protect citizens and ensure that the “pluralistic social fabric” of the country holds against mob violence.

Though, if this ruling will have any influence on actually stemming the hate violence sweeping through our land. A new law will work if gaps in existing law are what prevent state administrations from acting decisively and fairly against lynch mobs.

What is meant by Lynching:

Lynching is not just “mobocracy”; it is a collective hate crime

For Instance, Lynching may be sparked variously by disputes over allegations of cow smuggling or slaughter, or wild rumours of cattle theft or child kidnapping, or something even as trivial as a seat in an unreserved train compartment.

Whatever the ostensible trigger, murderous mobs gather to lynch people of hated identities with gratuitous cruelty. IndiaSpend found that 86 per cent of persons killed in cow-related lynching were Muslim, and 8 per cent Dalit

Main Reasons of these Lynching in recent times:

Is It an Administrative Failure?

There is a recurring pattern in police action too. If present, even as the slaughter of innocents unfolds, they don’t act, pleading later that they were outnumbered. In most cases, they come in too late to save lives, and very often they register crimes against the victims and drag their feet to charge and arrest the attackers

After the lynching, police often tries to record the incident as a crime of cow smuggling, animal cruelty, rash driving and road rage.

In its investigations, the police never cordon off the site of the lynch attacks: Even hours after the crime, people walk over the ground still splattered with blood or burned flesh. This is not a shoddy investigation. It is deliberate (and criminal) destruction of evidence which could have been used against the killers

The police in almost every case, instead, registers crimes against the victims.

In recent incidences reflect that, State home ministers, sometimes chief ministers, and senior police officials publicly denounce not the members of the lynch mobs but the victims and survivors.

For people in political authority, uniform and magistrates to take sides in hate battles is a profound crime against humanity. Yet this still is recognised at best as a moral failure, not a punishable crime.

If there is any new law we need to prevent the spread like an epidemic of this new scourge of targeted hate crime, of lynch mobs, it requires only one law, and this is the creation of a crime of dereliction of duty and communal partisanship by public officials.

In the recent years, the cases of mob lynching have increased exponentially, which is an alarming signal for the social harmony of the nation.

In the land of Mahatma Gandhi, who was the worshipper of non-violence, its very disconcerting and heartbreaking to see the innocent people being pray to the people with vested interests and a particular agenda claiming to be the protector of religion, custom, and society.

Off late, we have seen as to how the technology, which is considered to be the boon for mankind, is being used by some people to spread rumours and fake news leading to assault and death of innocent people.

In the recent times, several instances of misuse of social networking sites such as Facebook, Twitter, and WhatsApp have caused the loss of lives.

Though the service providers have come up with the modifications in the features to contain the increasing dissemination of fake news, yet it has not proven to be very effective. That means, there is a need for stronger regulation over the use of these apps.