Topic: urbanization – their problems and their remedies

1) Evaluate whether air pollution is the biggest challenge to urbanization? Discuss measures to tackle the menace of air pollution in Indian cities?(250 words)

Recently, we saw AQI of Delhi reach alarming levels. AQI levels of our cities are constantly off the roof, which is now creating various challenges for urban spaces. Clean Air is a basic necessity and has become one of the most elusive resource in our cities. Hence this question.

The question expects us to bring out why air pollution is a huge challenge for urbanization – bring out the economic impacts, societal impacts, health impacts etc. Examine the causes behind air pollution in cities and measures to address the same.

Introduction – Highlight some cases of air pollution in urban areas and point towards its severity.

Conclusion – Highlight the importance of dealing with this issue and the way forward.

How to tackle air pollution in India :-

2) Preamble is the philosophical key to the Constitution. Examine(250 words)

The question expects us to examine the reasons why preamble is considered to be the philosophical key to the constitution and the impact that it has on the interpretation of constitution.

Introduction – mention that SC has held that preamble is the key to understanding the minds of the constitution makers.

Body – first of all, examine the opinion of SC  on the nature of preamble, wherein, earlier preamble was considered not to be a part of the constitution, but thereafter, SC realised that preamble is key to understanding the minds of the constitution makers. Mention that preamble in a succinct manner conveys the aims and objectives of Indian state by emphasizing on qualities like justice, equality etc

Bring out how SC has interpreted several provisions of the constitution in light of the preamble.

How is preamble philosophical key of the constitution:-

Recently India and Pakistan attended the SCO meet for the first time, after their formal accession last year. This event will have significant impact on the peace, development and prosperity of not only the sub-continent, but also the entire Eurasia. The issue is related to GS-2 syllabus under the following heading-

The question simply wants us to write at length about the organizational structure of the SCO, what are its aims and what is its mandate.

Discuss- As an all-encompassing directive, the question directs us to write in detail about the key demand of the question- organizational structure and mandate of the organization.

Introduction – mention the year of formation and preferably enlist the members of the SCO.

Body-  Take the help of the articles attached to the question in order to frame your answer.

Conclusion– Form a fair and a balanced opinion on the overall potential of SCO and briefly discuss the scope for India.

o   The SCO is primarily centered on its member nations Central Asian security-related concerns, often describing the main threats it confronts as being terrorism, separatism and extremism.

o   Organisation is also redefining cyberwarfare, saying that the dissemination of information harmful to the spiritual, moral and cultural spheres of other states should be considered a security threat.

o   Over the past few years, the organisation’s activities have expanded to include increased military cooperation, intelligence sharing, and counterterrorism.

o   The SCO has served as a platform for larger military announcements by members. During the 2007 war games in Russia, both China and Russia used the occasion to announce that Russian strategic bombers would resume regular long-range patrols for the first time since the cold war.

4) Discuss the controversies associated with the proposal of imposition of a sugar cess? Suggest some long term measures to deal with the problems of sugar industry?(250 words)

The primary purpose of GST is to create one nation, one tax, one market. All forms of cesses, surcharges  etc were supposed to be subsumed under it. In this situation, talks of imposition of sugar cess raises several questions which needs to be examined.

The question demands us to bring out the various issues – constitutional, from perspective of separation of power, economic etc associated with imposition of sugar cess. Thereafter, it expects us to provide alternatives to resolving the crisis in the sugar sector.

Introduction – Explain the proposal of introducing sugar cess and mention what cesses are and its status under the GST regime.

Body – Discuss the various issues under heads like constitutional, economic etc. Analyze the case from both for and against perspective. Bring out issues like the basis of cess in GST regime, the authority of GSTN to impose cess etc. Post that, discuss the long term solutions to the crisis in sugar sector.

Controversies associated with imposition of sugar cess are :-

5) Critically analyze the need to promote the emerging slew of shared mobility options and app-based ride providers in India.(250 words)

Even though the governments, including the central and the state governments have tried to

increase and improve the public transport system, the efforts have not been successful in weaning people away from private transport and traffic woes continue. The issue is related to GS 3 syllabus under the following heading-

Science and Technology- developments and their applications and effects in everyday life.

The question wants us to dig deep into the emerging shared mobility options and app-based ride providers and analyze the advantages offered by them and problems faced by them.

Critically analyze- We have to scrutinize and look into the details of the issue. We have to identify the key aspects of the question, have a discussion on each one of them and form a personal opinion on the issue in the end.

Introduction– Mention the increase in number of motor vehicles in India from 5.4 million in 1981 to 210 million in 2015. Also mention the emerging shared mobility options and app-based ride providers and give some examples like Zoom car etc.

Conclusion- mention how —electrification, shared mobility, connectivity and autonomous driving— will drive the future of mobility and transportation and form a balanced, fair and a concise opinion on the issue.

Why India needs to promote emerging slew of shared mobility options and app based ride providers:-

6) Discuss the difference between aptitude and attitude. What do you think is more important of the two, in relation to civil services. Comment.(250 words)

Both aptitude as well as attitude are important as far as civil services are concerned. However,there is a large difference between the two and people have diverging views on which is more important for civil services. The question is related to GS 4 syllabus under the following heading-

Attitude: content, structure, function; its influence and relation with thought and behaviour; moral and political attitudes; social influence and persuasion.

The question wants us to discuss in detail about the differences between attitude and aptitude. It then wants us to deliberate upon, which one is more important as far as civil services are concerned.

Discuss- this is an all-encompassing directive. It directs us to write in detail about the difference between the two concepts.

Comment- We have to express our understanding of the issue and then finally present our opinion on the issue.

Introduction– Give a definition of attitude as well as aptitude.

E.g attitude is more important than attitude because aptitude can be increased/ improved much easily than aptitude, attitude guides our behaviour in difficult circumstances etc. Take the help of the articles attached with the question to frame your answer.

Conclusion– Based on the above discussion, form a fair and a balanced opinion on the issue.

An aptitude is a component of a competency to do a certain kind of work at a certain level, which can also be considered “talent”. Aptitudes may be physical or mental. Aptitude is not knowledge, understanding, learned or acquired abilities (skills) or attitude. The innate nature of aptitude is in contrast to achievement, which represents knowledge or ability that is gained.Where as attitude is the positive or the negative feeling towards a person, object, event, idea etc.

Differences between attitude and aptitude:- 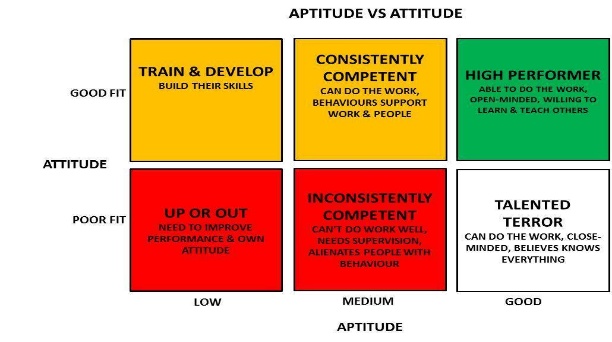 Civil servants need a certain aptitude which is the amalgamation of these three aptitudes :-intellectual, emotional and moral aptitude. A civil servant who has the aptitude of having good negotiation skill set, ability to take quick and quality decisions ,logical ability, reasoning  etc would be efficient .

However presence of aptitude alone may not suffice. Aptitude needs to be conditioned, and often reinforced by the right attitude (of compassion, honesty, public mindedness etc). A technically brilliant civil servant who lacks the right attitude may turn out to be self serving and apathetic(absence of compassion), or even corrupt(weak attitude towards integrity and honesty).

Attitude and aptitude often reinforce each other. A person lacking one is often driven to supplement the other. A civil servant should be high on both of these vital parameters in order to fulfill his mandate of public welfare.