Insights into Editorial: The tools for counting 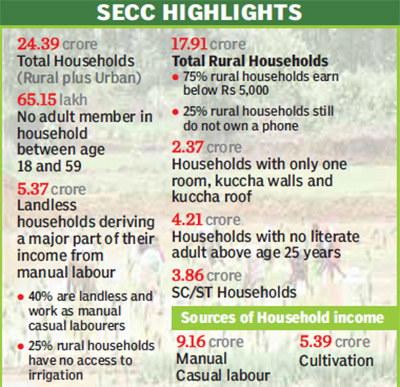 As the 2011 Census approached, demands for inclusion of data on caste in Census reached a crescendo. P. Chidambaram, the Union Home Minister at the time, was opposed to collecting caste data and blocked it by claiming that it was logistically impossible for the Census, but the Government included the caste subsequently, through BPL Census, later renamed as Socio-Economic and Caste Census (SECC,2011). It resulted largely in unusable data.

Consequently, if we want information regarding the size and characteristics of various castes in India, we must continue to look to the Census of 1931.

It is hard to imagine that the 2021 Census will not face another slew of demands for collection of caste data. It also seems likely that once again there will be a situation of unprepared for a full caste census.

If we really want to collect data on caste in India and not let the discourse about Indian society be shaped by the political exigencies of colonial India, the time to plan is now.

Colonial Censuses, beginning with the first Census in 1871, included questions about caste and used these data to divide and conquer India by first privileging Brahmins as interpreters of Indian culture and then targeting them as the roots of caste-based oppression and inequality.

G.S. Ghurye, the early 20th century pioneer of Indian sociology, reacted sharply by identifying this passion for classification as the source of anti-Brahmin movements. Veena Das, doyenne of modern Indian anthropology, also notes that the colonial Censuses via the process of recording caste generated a conception of community as a homogeneous and classifiable community and thereby influenced the processes of political representation. Consequently, post-Independence Censuses have shied away from including questions about caste.

What is at stake?

Without accurate data at a granular level for each of these categories consisting of thousands of jatis (castes) and upjatis (subcastes), we have no way of knowing whether this is correct.

Indian society has undergone a tremendous transformation since 1931. Land ownership that bolstered the power of upper castes has lost its hold. Land fragmentation and decades of agricultural stagnation have turned many upper caste landowners into marginal farmers barely eking out a subsistence.

While landlessness, once the bane of Dalit existence, has left the landless better poised to take advantage of rising rural wages, particularly construction wages. Consequently, while at a broad brushstroke the National Sample Survey (NSS) shows that mean consumption expenditure of forward castes is higher than that of Dalits, clusters of poverty persist among forward castes.

The present-day reality in our country:

Modern India is facing several challenges in spite of not giving credence to the caste census. Patels, Gujjars, Jats and Marathas is the recent example, where demands are coming for reservations. Karnataka politics centres around Lingayat and Vokkalika communities. Similar situation exists in several states, whether they are Yadavas, Kurmis, Kammas, Kapus, Reddys, Vanniyars etc.

The challenge for modern India lies in figuring out whether caste-based political mobilisation and strong sentiments for or against reservations would disappear just because we choose not to collect statistics about caste.

Economic growth of the past century, combined with strong affirmation action undertaken by successive governments of the independent nation, may have changed relative fortunes of various groups.

According to NSS data, the bottom fourth of forward castes are poorer than the top half of Dalits. India Human Development Survey shows that 56% of Dalit children ages 8-11 cannot read but neither can 32% of forward caste and 47% of OBC children. Hence, it is time to collect data that reflects the current situation.

However, we have nearly three years before the Census of 2021 and are fortunate to have data from the SECC and technologies rooted in machine learning at our disposal.

It would be possible to set up an expert group that uses the SECC data in conjunction with other data sources such as matrimonial advertisements and State-specific Scheduled Castes/OBC lists to make a comprehensive list of castes and condense them into meaningful categories via machine learning tools.

These categories could then be validated by domain experts from the Indian Council of Social Science Research (ICSSR) institutions in various States to come up with a district specific list of castes that would cover more than 90% of individuals in any given district.

Interviewers could use this pre-coded list to allow respondents to self-classify with a small residual group’s responses being recorded verbatim and categorised later. This is very similar to the technique through which occupational and industrial classification systems are created.

Collection of data on castes is inherently risky. Politicians have long realised the advantages and disadvantages of capitalising on the sense of relative deprivation among various groups.

However, once the SECC was conducted, the genie was out of the bottle. Demands are already rife for the release of these data. Conceding that these data are flawed and looking for better ways of collecting data on caste may be a way of calming the waters before the 2019 election.

It will take courage for a future government to collect data on caste and to use it to rationalise reservation policies. However, without better and more current data, our discourse on caste and affirmative action remains dominated by decisions made by the colonial administration.