Insights into Editorial: To reform the Education system 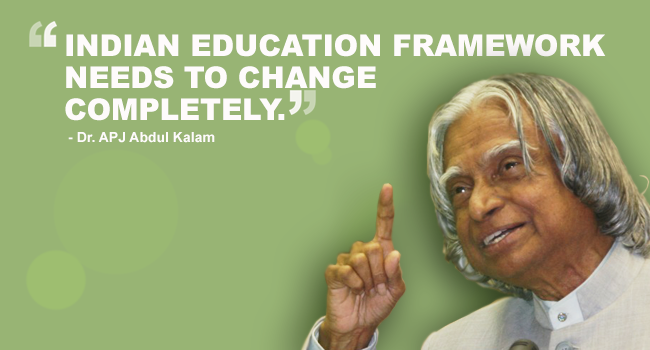 Our Indian Education system needs serious reforms and changes. India needs reforms from elementary itself. The ideal choice of learning is memorizing facts. Here to judge the student’s talent has only one factor i.e. percentage in board examination. So, students just mug up and undeniably Indian education is spoon feeding.

The Indian education and social arrangements are very inflexible on kids and completely ignore their feelings, thoughts and ambitions. Kids are pressed to study from the age of 3. Non-performers are treated as dunces and detested by parents and society.

As per UNESCO data, India has one of the lowest public expenditure rates on education per student, especially compared to other Asian countries like China.

Education in most schools is one dimensional, with an obsessive focus on marks. Added to this is the lack of availability of trained teachers at all levels. Quality teachers are the missing link in the Indian education system. Although pockets of excellence exist, the quality of teaching, especially in government schools, does not meet the standards.

With a literacy rate of 77 percent, India lags behind other BRICS nations, which have literacy rates above 90 percent. All these countries have better student-teacher ratios. So not only does India grapple with poor quality teachers, it also has fewer total teachers in comparison with other countries that do a better job at education.

Data from the Ministry of Human Resource Development show that only half of all students who enter primary school make it to the upper primary level and less than half that get into the 9-12 class cycle.

Study after study has shown that the true indicator of economic development in a country is the education and wellbeing of its people. Although, India has made rapid economic progress over the last three decades, one area that has not received enough attention is the quality of primary education.

Where Education planning is Fails in India:

We have a messed-up education system and have had one in place since Independence. Our first mistake was to not expand primary and secondary education for the aam aurat; instead, we proceeded to build temples of wisdom for the elite (higher education in general, IITs in particular). Just for clarification — the objection is not to expand higher education, but to its expansion at the expense of providing basic education to all.

One mistake has fed into another to yield madness at every corner. The children of the poorest of the poor, the ones most discriminated against on the basis of caste or religion, did not receive basic quality education, so they could not proceed to higher education. The ones that were able to go to school — and they did so in poorly-staffed government schools — did not receive quality education, and therefore were not able to compete with the rich kids when it came to college.

Cost of Education at various levels:

At present, there are close to 5.5 lakh students studying abroad, with over 2,00,000 in the US alone. Average tuition cost in a US college (state and private) is Rs 0.2 crore a year. For 2,00,000 students that is an expenditure of Rs 40,000 crore. Assume that the average tuition cost for the remaining 3.5 lakh individuals is half that of the US.

Total expenditure on tuition, by Indians studying abroad, comes to a total of Rs 75 thousand crore. The average duration of study of an Indian abroad is likely to be three years — hence, we arrive at a figure of about Rs 25 thousand crore spent by Indians abroad each student year. The central government, spends approximately this same amount.

Quality of Education-with the help of Technology:

Technology has to be a primary part of the process. Technology allows us to adapt to teaching and assessment of entirely new skills that are very significant for the present century and that you cannot progress in a kind of traditional setting.

But technology has to work through teachers. Technology can leverage prodigious teaching extremely. But great technology doesn’t replace poor teaching. The challenge is to convey technology into the depiction in ways that translate into good teaching and learning. This necessitates refined public policy, a long-term commitment, and a systematic approach.

Thus, it is high time that we take certain steps instantaneously so that not only the level of education is improved which will enhance an individual’s knowledge but also it will in turn lead to the upliftment of the country that we really need and certainly India will become one of the preeminent in terms of education and soon it will be a developed nation. Hence, it can be rightly said that Indian Education system requires serious reforms.

It is time that India began viewing school education as a critical strategic investment and gave it the status of a vital infrastructure project. As all in-country efforts have failed, we should go in for a radical overhaul of our educational infrastructure with the help of countries that have an amazing record in providing quality school education — Finland, for instance. We can surely afford to pay for that.

Providing universal quality education depends not on the performance of teachers alone but is the shared responsibility of several stakeholders: governments, schools, teachers, parents, the media and civil society, international organisations, and the private sector.

If only India had begun revamping school education at the start of economic liberalisation, it would by now have had the world’s largest pool of well-educated and highly trained workers. Fortunately, India continues to have the largest number of young people anywhere. By ensuring they get a world-class education over the next few decades, India will be well on its way towards becoming a developed nation sooner than expected.