Insights into Editorial: Countering China in the Indo-Pacific 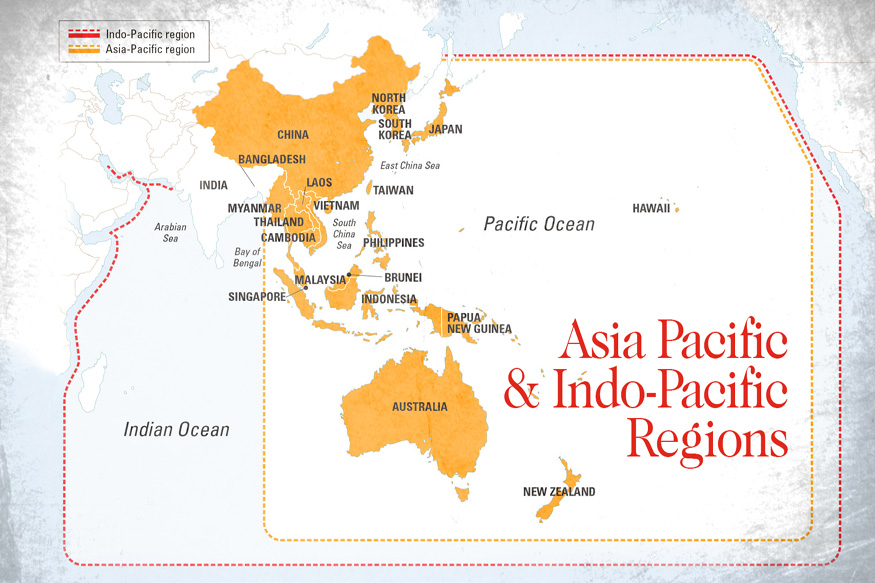 The Wuhan summit and Prime Minister Narendra Modi’s speech at the Shangri La Dialogue in Singapore laying down India’s vision in the Indo-Pacific region indicate that India is going to bide its time and avoid direct confrontation with China but will be proactive in building various capabilities.

Japan, India, the US and Australia will also join Rimpac (Rim of the Pacific) exercises commencing in June. India and the US are planning to hold the first two-plus-two dialogue (between their foreign and defence ministers) in Washington on 6 July.

India: As a link between Indo-China border area and the East China Sea:

Prime Minister Modi reiterated India’s stand on need for open and secure seas and skies, freedom of navigation and a rules-based order which is under threat from China.

India not taking military action in the Maldives despite a strong case to do so because of Chinese threats and playing down China’s build up in Doklam in Bhutan after the disengagement last year is indicative that India does not want to get into a confrontation with China right now, though it may risk ceding strategic space to it.

India is targeting a sustained 7.5-8% economic growth and aims to be a $5 trillion economy by 2025. It plans to spend over $250 billion in military modernization over the next decade. India is developing robust military partnerships across the Indo-Pacific, from getting access to military facilities to bilateral, trilateral and multilateral military exercises to training and capacity building of the militaries of friendly countries.

Developing infrastructure in countries of the Indo-Pacific region:

Similarly, the Chabahar port project in Iran can mitigate the importance of the Chinese Gwadar port in Pakistan. The Asia-Africa Growth Corridor (AAGC), a result of Indo-Japanese cooperation, will also counter China’s growing influence in Africa.

India has secured access to Duqm port in Oman for military use and develop the Agalega Island in Mauritius. The Indian Navy has secured a logistics facility in Singapore that will allow it to refuel and rearm and has similar facilities in Vietnam. India’s recent logistics agreement with France, just like the one with the US, allows it to access France’s military bases across the Indo-Pacific.

India and Indonesia are considering the development of a port at Sabang close to the Malacca Strait after the Indonesian minister for maritime affairs offered the port to India for military use. China was quick to warn India against militarization of the port.

India has been conducting a number of bilateral and multilateral military exercises. The Malabar naval exercises with the US and Japan are the largest and the most complex series of naval exercises that India engages in, developing interoperability with two of the most powerful navies in the Indo-Pacific.

The Quad, while not being given a military dimension yet, will be the most important grouping in the Indo-Pacific. It will have to set an economic programme to help smaller countries of the region. India will continue to expand its military exercises and develop bilateral and multilateral groups as Modi said at Shangri La.

Central to Modi’s speech was the Association of Southeast Asian Nations (Asean) unity, which he said was essential for a stable future for the region and that Asean lies at the heart of the new Indo-Pacific. India’s stress on the centrality and unity of Asean for securing the region and maintaining a rules-based order is important.

A united Asean backed by major powers will be able to counter an expansionist China. It can ask for joint exploration and utilization of the natural resources, and a freeze on making artificial islands and their militarization. It will be a counter to China’s own use of legal warfare as part of its three-warfare strategy on the legal, media and psychological fronts. India backing a united Asean in its dealing with China furthers its own interests in the region, which has abundant natural resources, without getting into a direct conflict with Beijing.

China, which is looking to expand its footprint in the Indian Ocean, will be forced to focus more on South China Sea. Smaller countries are susceptible to China if larger countries like India avoid confrontation. This can be offset if countries like India, the US and Japan work together to build infrastructure and provide development assistance to these countries to prevent them from falling under Chinese influence.

Economically and strategically, the global centre of gravity is shifting to the Indo-Pacific. If the region’s stakeholders don’t act now to fortify an open, rules-based order, the security situation will continue to deteriorate—with consequences that are likely to reverberate worldwide.

Groups like ASEAN will have to collectively approach China. Standing up to it and physically stopping illegal Chinese construction will gain international attention and the sympathy and backing of major powers.

With joint military exercises, India will develop interoperability and standard operating procedures, which will help in any joint military operation or even possibly a military alliance in the future.

Nowadays, further security cooperation among Japan, India, the US and Australia is increasingly plausible. The time has come to proactively further this cooperation to ensure prosperity and stability in the whole of Indo-Pacific.