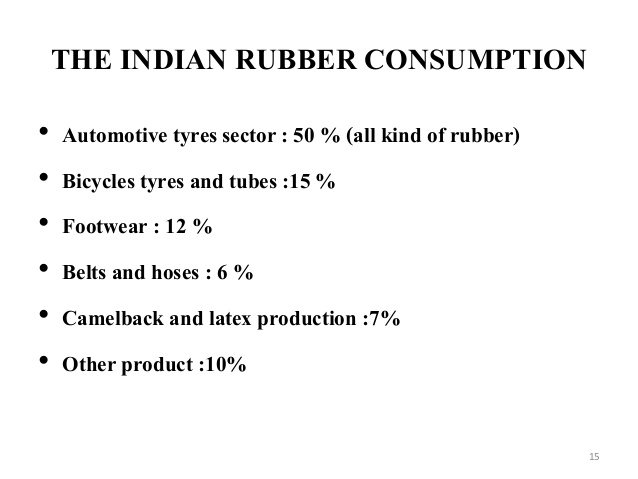 The long awaited release of the government’s first ever report on a national rubber policy (NRP) has still not come out. Apparently, differences of opinion among members of the expert committee representing various stakeholder groups had been the major reason for withholding the document for more than three years.

Meanwhile, mounting pressures from the Kerala Government and natural rubber (NR) producers’ interests led to the constitution of a task force by the government to submit a report for the revival of rubber sector.

Small and medium scale industrial units will turn unprofitable and large scale units may migrate to countries where the industrial climate is advantageous. The net result would be loss of employment both in the farming sector as well as industrial sector.

Rubber sector has been an active participant in India’s export drive. Rubber products worth around Rs 20,000 crore are being exported from the country annually which is more than 20% of the domestic rubber output.

Unfortunately, a consensus on the need for a National Rubber Policy remained elusive due to the conflict of interests arising from a higher regional concentration of Natural Rubber production vis-a-vis the diffused pattern of rubber consumption.

The strategic need for evolving a NRP in India stems from the unique characteristics of the sector borne out of its evolutionary dynamics over time.

The emergence of India as a major player in the world rubber economy had been unique for the interconnectedness among the segments rooted in the domestic market orientation that evolved under a protected policy regime since the early 1940s. This is in sharp contrast to the development of export-oriented ‘rubber enclaves’ in other major producing countries with the exception of China.

In essence, the domestic demand-driven interconnectedness with limited exposure to export markets and external competition had been the hallmark of India’s rubber sector.

The aim of the proposed policy would be to boost export and production of rubber, “keeping in mind farmers’ interests“.

Developing a national rubber policy to address various issues concerning the sector with a view to boost shipment and productivity.

This policy is necessary because there are so many challenges the sector is facing. There is a need to make sure that all issues are addressed through this policy.

A task force comprising representatives of state and central governments has been constituted for suggesting short term-solutions and long-term strategies to address the issues.

Major issues related to the sector include minimum support price for natural rubber, restriction on import, minimum import price, categorisation of natural rubber as an agricultural product, import of cup lumps, safeguard duty and increase in budget allocation to Rubber Board.

Import of natural rubber is allowed only through sea ports of Chennai and Jawaharlal Nehru Port at Nhava Sheva, Mumbai.

There are around 13.2 lakh rubber small holdings in the country, out of which around 9 lakh are in Kerala.

However, the trade policy reforms initiated since 1991-92 and the consequent exposure to foreign competition through the multilateral and RTA routes have changed the scenario. The challenges of market integration characterised by a surge in imports of rubber and rubber products are played out in the domestic market than in the export markets.

It is the unorganised smallholder rubber and non-tyre segments that have borne the brunt of the market integration process. The volatility of NR prices and the fluctuations in farm income have hit the conventional farm management practices including replanting.

One outcome this trend has been a steady growth in the share of senile trees (more than 50 per cent) in the total tapped area in the country. The negative growth rates in NR productivity in Kerala (- 2.8 per cent) and all India (- 2.7 per cent) between 2007-08 and 2016-17 show that the policy prescriptions have failed.

Similarly, the crisis-ridden non-tyre segment has been hit by the volatile raw material prices and growth in imports.

In 2016-17, India’s negative balance of trade in rubber and rubber products was $415 million. So the segmented approach has failed in addressing the challenges of the sector. Unlike other major NR producing countries the export intensity of India’s rubber sector had been negligible. The estimated export intensity was only 22.5 per cent even during 2014-15.

Hence, sustaining a self-reliant rubber sector having applications ranging from household articles to the space programme is a major policy challenge. Nevertheless, the need for a NRP looms large in the context of market integration process sustained by the non-negotiable trade policy commitments under the multilateral and regional pacts.

Though India has recognised the relevance of a sustainable rubber sector as early as 1942 there is no replicable model to address the challenges of market integration.

China’s ‘Going Global’ strategy initiated in 2002 is a valuable template. The establishment of China Natural Rubber Association in 2007 and the Rubber Valley Project by China Industry Association in 2011 provided the institutional framework.

India cannot afford the luxury of witnessing a gradual disintegration of its rubber sector built over the past seven decades for the sake of free trade.

A comprehensive National Rubber Policy is not only inevitable to recognize the strategic importance of sustaining a self-reliant rubber sector but also to identify the inherent strengths and accumulated weaknesses of the embedded structure to capture synergies in the era of market integration.

The proposed national policy on rubber should reflect the real concerns of all stakeholders in the sector and protect the livelihoods of rubber growers in the country.

It should also realized that synthetic rubber is replacing natural rubber on a large scale as it is available at competitive price. The government shall focus its attention on enhancing productivity in the farming sector by investing in Research and Development. Increased productivity alone can sustain interest of the farmers.